"I pray they never have to utilize anything we worked on with them, but if the war comes to Lviv, they'll be ready." 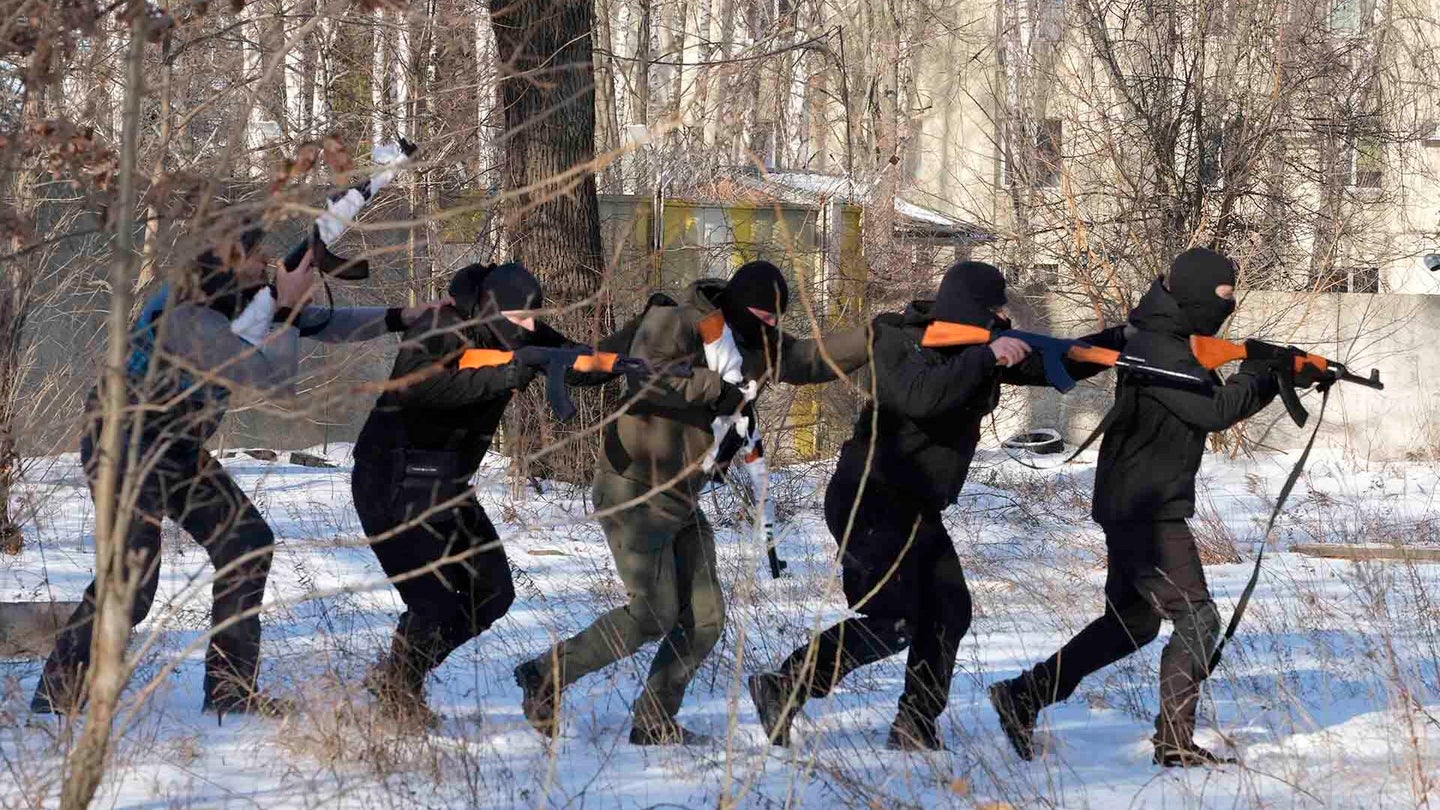 Members of Georgian Legion train civilians to adapt them with the self-defense capabilities in case of Russian invasion in Kyiv, Ukraine, Friday, Jan. 4, 2022. The paramilitary unit formed mainly by ethnic Georgian volunteers to fight against Russian aggression in Ukraine in 2014, now includes people of various nationalities. Currently there are few US citizens in the Georgian Legion, but according to its commander Mamuka Mamulashvili, by the end of February there will be at least 30 Americans joining. (AP Photo/Efrem Lukatsky).
SHARE

Former Army captain Adrian Bonenberger and his wife had begged their in-laws to get out of Kyiv, but they refused to leave Ukraine. Then the Russians launched a full-scale attack on the country.

After several sleepless nights, Bonenberger suggested to his wife that they travel to a relatively safe part of Ukraine and hire someone to drive her parents from Kyiv to a place where they could meet. He said his wife agreed, adding: “We should also plan to do something when we’re there. If we’re going to go there, we’re not going to just sit there waiting for my parents.”

And that is how Bonenberger, who deployed twice to Afghanistan while he was in the Army, and two other American veterans spent two weeks in the city of Lviv in Western Ukraine training about 50 civilians on small unit leadership and other military skills. The youngest trainees were teenagers and the oldest were in their 40s and 50s. Most of them had never carried a weapon, and none of them had any recent military experience.

One reason why Bonenberger was motivated to provide military training to Ukrainian civilians was that he remembered a video he had watched early in his Army career that showed an Iraqi teenager armed with a rocket propelled grenade getting shot, falling to his knees, and then collapsing onto his face.

“As soon as I heard about the details of the people that we were going to be training, I remembered that video and I just thought to myself like: People defending a democracy deserve more than that,” he told Task & Purpose. “These are people who would defend the city – they would run out into the street with an RPG and they would get shot down immediately. And if we could train them to be careful, then they wouldn’t do that. They’d be able to survive war and keep to the shadows, keep quiet.”

U.S. government officials have urged Americans not to travel to Ukraine because the country is far too dangerous, but so far, they have not publicly threatened anyone who goes to the warzone anyway. Justice Department spokesman Wyn Hornbuckle refused to answer a question from Task & Purpose about whether Americans who provide medical support in Ukraine or fight against the Russians could be punished when they return home.

“We’ll decline to comment on hypothetical scenarios,” Hornbuckle said on Thursday. “As you are aware, the State Department has advised Americans not to travel to Ukraine.”

But this is far from a hypothetical scenario. Bonenberger is just one of many Americans – with and without combat experience – who are streaming to Poland and Ukraine to help however they can.

Prior to leaving for Ukraine, Bonenberger consulted with some lawyers and FBI agents, who advised him that there are legal consequences for Americans who serve in foreign militaries, but he would be “free and clear” to train civilians on urban defense.

Because the Ukrainian civilians had so little experience with handling weapons, Bonenberger and the other veterans spent a lot of time instructing the civilians that they should never point their muzzles at anything they did not plan to shoot, “Which, obviously precludes any of your battle buddies,” he said.

The Americans also showed the Ukrainians how to stack up and enter and clear a room, but that training was not intended to show them how to defend against Russians, he said.

“That’s a very advanced task and it’s not something that we recommended they do,” Bonenberger said. “We did that to teach them what the vulnerabilities of those things are so that when they are on the defense, they would be able to attack them more effectively. Every time we did enter and clear a room, we were like: You’re doing this, not to enter a clear a room, but because somebody is going to try to do that to you; and look how hard it is to do – look at all the opportunities you have to interrupt this formation.”

Bonenberger said that he and the other veterans also stressed that it is important for the Ukrainians to decide when to use the skills that they had learned against the Russians. “We taught them that if you see a unit moving quietly and using hand and arm signals and being careful, it’s probably not a unit you want to tangle with. But if you see another unit that’s pretty shabby and undisciplined, that’s a pretty good unit to make an example of – to fight.”

Bonenberger and two other veterans on the team, Ben Busch, and Matt Gallagher, left Ukraine on Tuesday. Later that day, CNN’s Anderson Cooper featured the three men in a story about their training efforts.

Gallagher, a former Army captain and Iraq war veteran, said he went to Ukraine because it provided a unique opportunity to help regular people in need.

Teaching the Ukrainian civilians to move and communicate was one of the most fulfilling experiences of his life and it was hard to leave them after they had accomplished so much in just two weeks, he told Task & Purpose.

“One of the cool things about the group we worked with is they pretty much knew nothing, they were a blank slate,” Gallagher said. “So, anything we gave them was new and, if we taught it well, helpful. There weren’t any bad habits to unlearn. They had all the motivation in the world; this is deadly serious for them; they see what’s happening elsewhere in their country and often know people being directly affected by the war. So, it was on us to meet that need for knowledge and skills.”

The American veterans treated the experience as a short mission with a clear purpose and timeline, so they made sure to implement several layers of security, said Gallagher, who declined to elaborate on what specific precautions the team took.

Overall, he believes the mission was a success. The Ukrainian teachers, welders, information technology workers, and lawyers whom he trained were able to come together as a capable defense force.

“I pray they never have to utilize anything we worked on with them, but if the war comes to Lviv, they’ll be ready,” Gallagher said.

While veterans like Gallagher are venturing to Ukraine to teach locals how to defend themselves, others like Ryan Chocholek have come to Poland to provide badly needed medical treatment to the constant stream of refugees crossing the border.

A former Army corporal and Iraq war veteran, Chocholek leads a team from the nonprofit group BTIA International Medical Aid that includes four other veterans. They are all emergency medical technicians and paramedics.

Right now, the team is operating a medical tent on the Polish side of the border, where they are treating patients suffering from hunger, exhaustion, and a wide assortment of other ailments, he said. Some of the refugees were beyond saving and died.

“The situation at the border is fluid, and complicated,” Chocholek told Task & Purpose. “I want the world to know that real human beings are caught up in a bullshit political game and land grab.”

Since Russia launched its war on Ukraine late last month, international volunteers from across the world have headed to the region to help, but not all of them are showing up prepared for the job.

Former Marine Corporal Joseph Chase is currently on the Polish border as a medic, trying to see if he can get to Ukraine to medically evacuate patients. So far, he has met other American veterans, who arrived in the warzone without helmets or body armor thinking “they could wing it.”

“Seriously, if you’re coming here you need to know why you’re getting yourself into,” Chase told Task & Purpose.

Many of the volunteers don’t understand operational security, Chase said. They wear camouflage uniforms when they travel, making them easy to identify at airports. He’s also encountered American civilians who should not be there, including a man with Parkinson’s disease, who was showing tremors even though he was on medication.

“I’ve seen a lot of Americans who would/didn’t qualify to be in the American military for some medical ailment or other reason… and they either seem to have a death wish or a crazy dream that they think they can fulfill over here,” Chase told Task & Purpose.

Chase initially thought about joining the Georgian National Legion, a group of foreigners fighting the Russians, but he ultimately found that the best way to help was assisting the Red Cross and Polish police.

“They were very happy once they knew we were veterans and there to help,” Chase said. “They trust us. The volunteers are exhausted and have been working around the clock since this all started.”

He encouraged other Americans with no military experience to help refugees rather than try to fight against the Russians. He also has a bleak prediction for those who do not heed his warning.

“A lot of these people are just going over to die,” Chase said. “And I get that, but it’s not the smart thing to do.”