6 months into Russia’s invasion, American vets reflect on training and fighting alongside Ukrainians

Six months into the Ukraine war, veterans who went there said they felt obligated to help however they could. 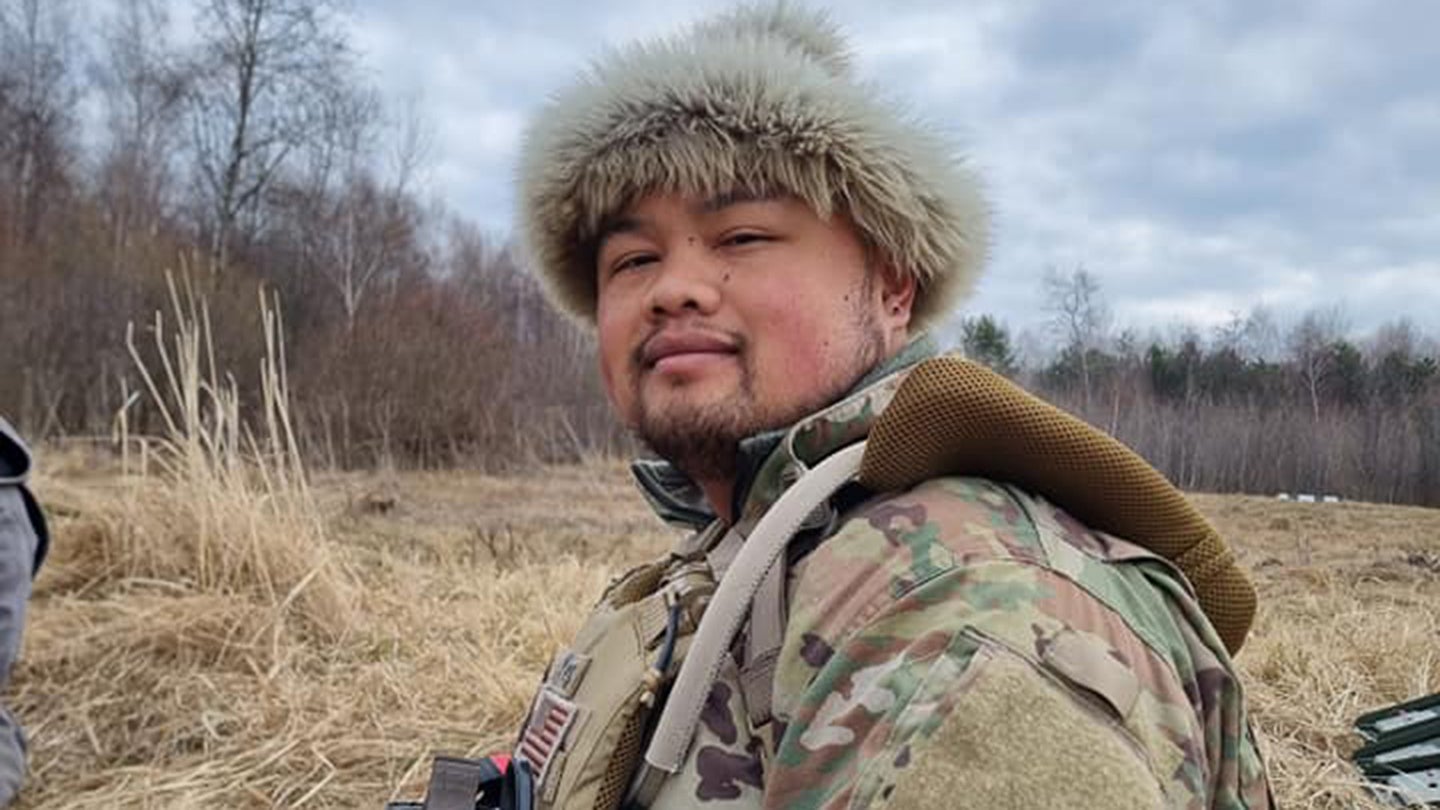 Former Army Cpl. Ryan Chocholek is one of an unknown number of American veterans who have traveled to Ukraine since Russia launched its full-scale attack on the country six months ago.

Chocholek, who worked as a medic near Ukraine’s capital of Kyiv, said he wants people to know that the pictures and videos coming out of Ukraine fail to capture the sounds, smells, and raw emotion that he has witnessed there.

He also said that American service members and veterans need to know that this war is much different from Iraq and Afghanistan.

“This isn’t small groups of insurgents planting IEDs [improvised explosive devices], firing mortars, or taking pop-shots,” Chocholek told Task & Purpose. “This is dragging injured and wounded through city centers while trained, and uniformed, militants try to overtake a city held by mostly militia who are just as well armed. It is warfare almost 24/7 and the world is forgetting and caring more about which celebrity breakup happened this week.”

Indeed, many American media outlets have scaled back on their coverage of the Russian invasion of Ukraine as readers and viewers have become apathetic to the conflict, in which the front lines hardly seem to move anymore.

But there are signs that the war could escalate soon. The U.S. embassy in Kyiv is urging all American citizens to leave Ukraine because it expects Russia to intensify attacks against Ukrainian civilian infrastructure and government facilities in the coming days.

Ukrainian President Volodymyr Zelensky has also warned that Russia could unleash “something particularly ugly, particularly vicious” on Wednesday, which marks the 31st anniversary of Ukraine’s independence from the now defunct Soviet Union and the six-month anniversary of Russia’s current war against Ukraine.

Chocholek is one of several American veterans who talked to Task & Purpose about why they went to Ukraine and what they saw there. He said that he and the other veterans who went to the war zone had just one goal: To help people.

Politics mean nothing to Ukrainians whose homes have been destroyed and whose children have been killed by building collapses, he said.

“It is odd coming back from volunteering, versus coming back from a deployment with the Army,” said Chocholek, who returned from Ukraine about two months ago. “Not that we ever asked for any of it, but coming home in the Army there was always some sort of celebration-type event when we first got home. This one was a very thankless job.”

Former Marine Sgt. Scott Schofield said he knew he had to go to Ukraine when he watched news coverage of the Russian invasion.

“I felt they need help, honestly,” Schofield told Task & Purpose. “I was sitting there and watching it on TV – literally going crazy. I couldn’t believe this shit was happening. I couldn’t believe we weren’t doing anything. Then, when the president [Zelensky] said: Hey, if you’re a foreign fighter, if you have combat experience, something that you bring to the table – that was all it took for me.”

Schofield, an Iraq war veteran who also served as a marksmanship instructor in the Marine Corps, said he spent three months training Ukrainians on basic combat skills. That included teaching the Ukrainians how to move with the ebb and flow of battle so that they could fall back rather than making a hopeless last stand.

The training also involved identifying Ukrainians who were learning quickly as part of efforts to create a professional corps of non-commissioned officers, which both sides in this conflict lack, he said.

Soviet military doctrine did not empower enlisted leaders the same way the U.S. military relies on noncommissioned officers. That is why senior Russian officers in Ukraine have had to carry out tasks normally entrusted to small unit leaders in the U.S. military – and that’s also a reason why several Russian general officers have been killed at the front.

Now, the Ukrainians are learning an entirely new way to understand the battlefield, which is largely defined by skirmishes between small units, Schofield said.

“You try to talk to these guys about small unit leadership; you try to talk to them about contact on a small – like platoon-level engagements – and they have no idea what you’re talking about, because to them it’s take everything you have within 20 square miles and throw it enmasse at whatever is staring at you across the battlefield,” Schofield said. “And if that is 30 tanks and 100,000 infantry, then 100,000 infantry is literally going to run at 30 tanks, because that’s how they know to fight.”

Some of the American veterans who have traveled to Ukraine singed up with the country’s International Legion to fight the Russians. But a recent investigation by the Kyiv Independent media outlet found that the legion has been plagued by bad leadership, with some fighters accusing their chain of command of sending them on suicide missions.

One Army veteran, who asked to be identified only as “Jim” for security purposes, told Task & Purpose that the legion’s leadership could be very dysfunctional. Jim, who was in Ukraine from April to June, said he noticed several red flags with the legion, such as how none of the people who joined were required to show a DD-214 or some other proof of service. Jim previously served as an infantryman soldier and deployed to Afghanistan.

Jim and a small group of Americans were initially told by their Ukrainian commander Vadim that they were going to Odessa, in the western part of the country. Instead, they were sent to the city of Severodonetsk on the front lines, where Ukrainian troops were engaged in almost suicidal resistance against the Russians.

Things seemed ominous prior to their first patrol, Jim said. None of the Americans were provided with maps and the Ukrainian officer in charge failed to brief Jim and his team on the routes they would use to reach their objective and return, Jim recalled. The officer assured the team that he had the patrol’s only radio and iPad and would tell them where to go. But within minutes of stepping out on the patrol, the officer was killed and all his equipment was destroyed.

Out of their group of 12 people, three members of the team were wounded, including one critically, Jim recalled. The team took cover in a home that was within a kilometer of the Russians until Vadim came upon their position. The team was ultimately picked up by a Ukrainian Humvee, but then they were ordered to continue with the mission even though they had suffered 33% casualties, Jim said.

“They put three guys in this Humvee and they drive off in the direction that we got hit from,” Jim said. “Then we ask: We’re evacuating? And they were like: ‘No, this is war. We keep going.’ And we’re like: No, that’s not how you do war. You don’t just keep going no matter your losses. You’ve got to be smart about it.”

Eventually, the Americans convinced the Ukrainians that they were not going to continue with the patrol without full manpower and lacking any intelligence at all, Jim said. They had to talk to the State Department to reach leaders in the legion so that they could withdraw from Severodonetsk before they were encircled by the Russians. That proved to be even more tricky when Vadim initially refused to let them leave.

Eventually, Jim and the other Americans made it to Kyiv and their contact at the State Department advised them to leave Ukraine. Still, Jim said he hope to return to Ukraine in the future to either serve with a different battalion in the International Legion or to train Ukrainian forces.

Hieu Le, an Army veteran who had deployed to Afghanistan, decided to resign from the legion after going on a mission to retrieve the body of a fallen Georgian soldier behind enemy lines. While his task was not suicidal, it put Le and his fellow volunteers at great risk, he said.

In March, Le wrote in a Facebook post that he and his comrades had been falsely accused of stealing. After passing a polygraph test, Le decided to go home, only two weeks after arriving in Ukraine.

Since then, Le has faced criticism on social media from those who say that he left Ukraine too soon and that his tenure with the International Legion was a mere stunt, he told Task & Purpose.

“People who called me a coward and said they would’ve stayed way longer, despite not ever going at all,” Le said.

Still, Le said he does not regret going to Ukraine because he knows that he did what he could – and the other people who served with him in the legion know that too