In search of a just war: Why American veterans are answering a call to serve in Ukraine

"I signed up to go overseas and serve my country, not drill for four years." 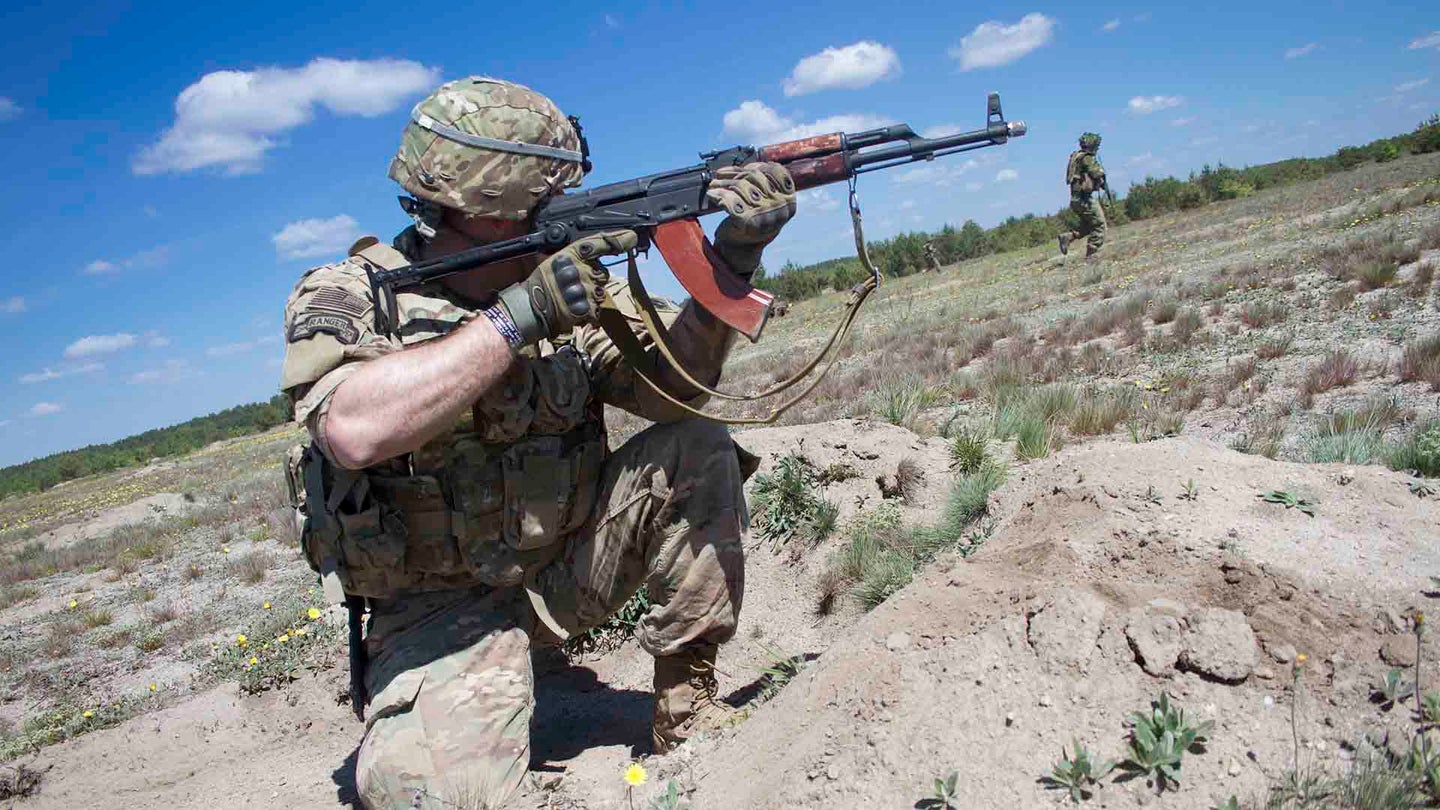 A member of the 45th Infantry Brigade Combat Team assigned to the Joint Multinational Training Group - Ukraine, covers Canadian soldiers under his command during a combined Canadian - U.S. section attack demonstration for Ukrainian noncommissioned officers at a Ukrainian army base near Zhytomyr, Ukraine, on May 22. 2017. (Photo by Sgt. Anthony Jones, 45th Infantry Brigade Combat Team).
SHARE

For one active-duty Marine infantryman who is just weeks away from leaving the Corps, Russia’s invasion of Ukraine is an act of naked aggression so egregious that he has been inspired to risk his life for people in mortal danger even though he’s never once set foot on Ukrainian soil.

“I joined the Marine Corps to help innocent people and fight for freedom and I was raised that if someone needs help or is in danger you do whatever it takes to help and save them, even if it means your life,” said the Marine, whom we shall refer to as “Mike.”

Mike, who requested anonymity for this story because he is still in the Marines, is one of an unknown number of Americans with military training who plan to travel to Ukraine to somehow help the local population, which has been caught in the biggest conflict in Europe since the end of World War II.

He said he hopes to use the medical training that he received in the Marine Corps as well as his firearms skills as part of a nonprofit group that provides medical support and security for Ukrainian troops and civilians who have been wounded by the Russians.

Even though he serves in the infantry rifleman military occupational specialty – the Marine Corps’ largest community, which saw extensive combat in Iraq and Afghanistan – Mike has spent his entire military career in garrison. Now, suddenly he has a chance to save people’s lives and protect them from harm.

“I signed up to go overseas and serve my country, not drill for four years,” he said. “I was raised that freedom was everyone’s right and that right should be defended with every fiber of one’s being.”

It is impossible to get reliable information on how many American veterans are planning to go to Ukraine or are already on the ground to serve as medics or even fight against the Russians. Ukrainian President Volodymyr Zelenskyy recently announced the creation of the International Legion of Territorial Defense for foreigners with military experience or medical training who want to support the Ukrainian military.

While a Ukrainian government official has told Voice of America that 3,000 Americans have volunteered to serve in the unit, Ukraine is also conducting a ferocious information war to undermine Russian morale and solicit more assistance from the United States and other NATO allies. That means truth – often the first casualty of war – is becoming increasingly hard to divine amid competing Ukrainian and Russian propaganda.

What is clear, however, is that American veterans are gravitating towards a war that their country is officially not part of. Even though the United States is providing Ukrainians with anti-tank weapons and other arms, President Joe Biden has repeatedly said that no U.S. troops will deploy to Ukraine to fight the Russians.

U.S. government officials are telling veterans and other Americans not to travel to Ukraine because it is too dangerous. “If you’re an American, and you want to do right by Ukraine, the best thing you can do is find a way to donate to so many agencies that are trying to deal with what is now clearly a humanitarian crisis in the region, certainly there in Ukraine,” Pentagon spokesman John Kirby told reporters on Monday.

But many veterans may see helping the Ukrainians as aiding the right side in a just war, where the differences between Ukraine and Russia are as stark as good vs. evil.

“My sense is that Russia’s unprovoked invasion and its explicit targeting of civilians are such stark moral contrasts to Ukraine struggling to defend itself and chart its future that people in free societies feel incredibly good about helping Ukraine,” said Kori Schake, a respected defense expert with the conservative American Enterprise Institute think tank in Washington. “As Reagan said: ‘There is a profound moral difference between the use of force for liberation and the use of force for conquest.’ Russia and Ukraine are illustrating that difference for us all to see.”

Veterans are often drawn to helping others after they leave active duty. Many become emergency medical technicians and other first responders. When Kabul fell to the Taliban, veterans groups stepped in to rescue Afghans at risk of being killed. Ukraine is just the latest crisis where veterans have answered calls for help.

One Marine veteran told Task & Purpose that he has spent the past two weeks emailing Ukraine’s health ministry and the country’s embassy in Washington, D.C., as part of his ongoing attempts to volunteer to serve as a medic inside the war-torn country.

“I’m mainly trying to go along with what the people who have done this before are advising: ‘Don’t self-deploy, wait for groups on the ground to get situated, etc.,’” said the Marine, identified by Task & Purpose as “Gerald” for security reasons. “It’s easy to become a resource drain as opposed to an asset.”

A former Marine officer, Gerald said he initially looked at joining Ukraine’s international legion, but he noticed that many of the people who claimed on Reddit that they had applied to the unit did not have military experience and “seemed like they maybe hadn’t thought through the decision very well.”

Gerald also said that he was concerned that the U.S. government may penalize Americans who volunteer to fight for Ukraine.

He later discovered on Reddit that the Ukrainians are looking for people to provide medical assistance. That would be a perfect fit for him because he could apply the combat lifesaving and tactical combat casualty care skills that he learned in the Marine Corps, and he previously volunteered to serve with an ambulance crew.

Gerald said he was still in the Marine Corps when Americans went to the Middle East to join Kurdish groups fighting against the Islamic State group, so he was not able to go at the time. He now faces a situation where there is no way to tune out the carnage in Ukraine.

“It’s the first time I’ve done something like this,” Gerald said. “I work in operations for a company at the moment and have been struggling to focus on work while Putin brutalizes Ukraine. The amount of information available from on the ground – footage or reports from different journalists – is too much to ignore.”

Are you a U.S. military veteran in Ukraine now or are you headed there? Share your story with reporter Jeff Schogol on WhatsApp or Signal at 703-909-6488.