“What is the saddest thing you have ever seen?” one girl asked. I had to think about it for a moment. 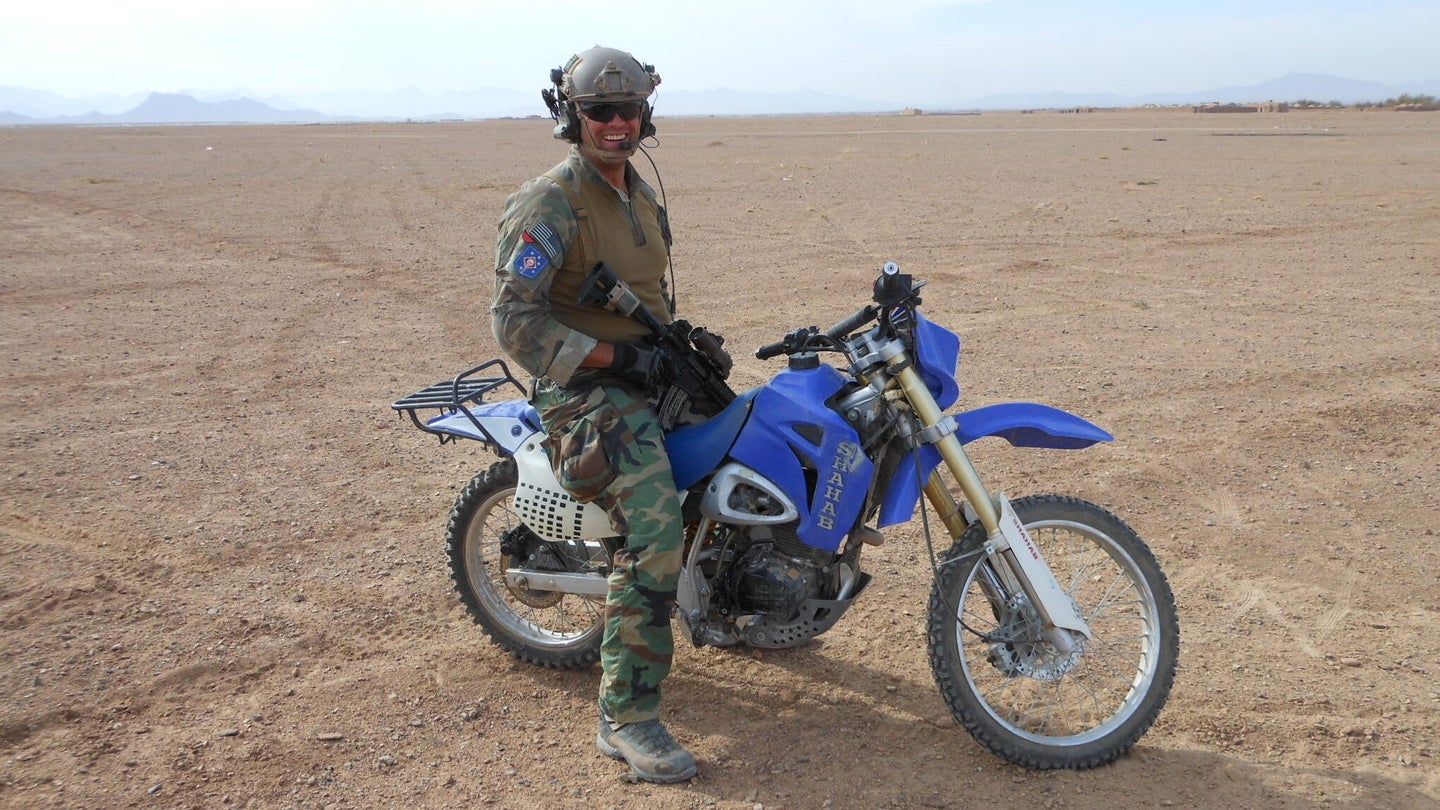 In the Spring of 2011, my friend Tom – a public school teacher – requested I speak of my experiences as a Marine serving in Afghanistan to his history class at Malden High School in Malden, Massachusetts. Malden is a working-class suburb of Boston. Many of his students receive free school lunches.

Poor, yet proud, his kids were still typical American teenagers; full of angst and hormones and curious about the future. Tom also asked that I address the importance of understanding history, and why, as a country, we should value the freedoms many take for granted, such as the ability to say and do as we please — within the bounds of the law — as compared to the authoritarian nature of places like Afghanistan, Iran, and Syria.

As I delivered my presentation, trying my best to sound interesting, I could tell that many in the class were bored or didn’t care about what I had to say. At least that was my perception. Having raised teenagers, it’s hard to tell sometimes. I brought my son Sean with me. As a Freshman, he listened about as attentively as the rest of the class. Despite my attempts at engaging them with open-ended questions and presenting thought-provoking missives, I felt I wasn’t reaching them.

When I finished extolling the virtues of our great Republic and expressing my belief in the same, I asked for questions. Surprisingly, I received several poignant and relevant ones. It turns out the slackers I observed were actually listening all along.

“What is the saddest thing you have ever seen?” one girl asked. I had to think about it for a moment. In my time serving in Special Operations as a United States Marine Officer, I’d witnessed much horror and pain. In the end, I decided on the following story:

In 2007, I lived on a Forward Operating Base (FOB) in Afghanistan outside the city of Lashkar Gah, which, ironically, means Little America. An Improvised Explosive Device (IED) exploded in a market inside the city. We heard the explosion and saw a plume of smoke from our FOB and knew it was only a matter of time until desperate people with major injuries seeking medical aid would arrive. They had no other options.

Within half an hour they came in a ghoulish procession. Some traveled in cars. Others limped along. Another was rolled to us in a wheelbarrow. Our corpsmen (medics) performed triage, treating the worst injuries first, including an amputation.

All of us on the FOB were trained in combat medical care. We all could assist our surgeons in some capacity. Everyone wanted to help. I treated a young boy of about nine years old, badly burned on his arms. He had been cooking in the market when the force of the blast covered him in the hot oil he was using. I had never seen anything like it. His wounds were hideous. He bore it all stoically.

I placed him on the treatment table in our designated medical center and, under the doctor’s supervision, intravenously administered some ketamine to him. Ketamine is a powerful sedative and it mellowed him out pretty well. Once it took effect, I began to debride his arms with saline solution. His skin came off in sheets, revealing pink and raw flesh below.

Because of the ketamine, he felt no pain, but as I wrapped his burned arms in a special gauze designed specifically for burns, I shuddered at how light his little arms felt. His only complaint was how thirsty he was, but unfortunately, because of his wounds and the IV, I couldn’t give him water.

Some of the other villagers had suffered such severe wounds that we had no choice but to call for a MEDEVAC helicopter. I suggested we needed to get the little boy on that helicopter too since his burns and exposed skin would undoubtedly become infected without follow on care. I was still amazed that after all he’d been through, he never moaned or complained, even when he was brought in for treatment.

I asked where his parents were, or if anyone knew who he was. No one knew anything about him. I feared he was just dropped off, or maybe he knew where he could get treatment and tagged along with whoever was bringing people to the U.S. base. Regardless, we had to move him to a higher echelon of care and there was no one I could talk to about where this boy was going.

We kept all of the casualties stable until the MEDEVAC helicopter landed, a British twin-rotor CH-47 Chinook. I told the receiving crew chief that I had administered ketamine to the boy, the time I had done this, and the nature and mechanism of his injuries. She shouted her gratitude to me for the update over the intense noise of the helicopter. We loaded the rest of the casualties onto the loud, clunky machine, then it lifted into the air in a swirling storm of dust and noise. We watched it trail off until it was out of sight, then, out of earshot. All was silence in its wake.

Watching that helicopter depart ranks among the saddest things I have ever witnessed. A young boy, badly wounded, flying to Kandahar, without anyone knowing who he was or where he was going. I thought of his mother, his family, and wondered if they were concerned about him. I contemplated his future. I thought of my own kids, as I stood on that empty landing zone in a t-shirt and a pair of shorts listening to the wind. I was heartbroken.

We were trained from the start to kill the enemy. To do that, we made it easier by not seeing them as humans. I know plenty of people who did not recognize the Afghans’ humanity. Perhaps it is easy to see your enemy — those who are shooting at you and actually fighting you — in that subhuman context, but I never viewed them that way. The taking of human life isn’t easy, even if it saves those of your comrades or even yourself.

The larger issue was that we were fighting an insurgency against an enemy that could and did blend in with the populace, and who had little regard for human life. This made it easy for them to plant a bomb that wreaked carnage on a warm Saturday afternoon. The boy brought to us was an innocent casualty in a war that seemingly had sides. But those sides were not clearly defined — even within the town in which he lived.

We couldn’t turn away those mangled people. Doing so would have made us worse than our enemies. War is the basest of man’s actions and I did what I did that day. I treated that boy by doing all I could for him. Were my own son in that situation, I would have prayed for the same.

Recalling that day, it was hot and dusty, like every other in that peculiar place. I was learning to deal with being in a combat environment and what the price of our presence meant for these people. Reflecting now, I see that we were doing the best we could under those circumstances in hopes that we could offer a better way forward to a society that ultimately didn’t want what we were selling.

But the helicopter was more than a means of evacuation – it was a symbol of what we could quickly bring to the beleaguered and maimed; of our wealth and ability to utilize it to help those in need. For those wounded Afghans, it represented a commodity they did not have in abundance: hope.

Writing this, I think of that boy, wondering what became of him if he even survived. And if he did survive, what kind of life can he expect for himself now that the Taliban have retaken the country.

We did our best. In the midst of inhumanity, we tried to be human. If we didn’t try, then it truly would have been a loss. We tried.

After the girl’s question I answered a few more from the class and then Tom asked me if I could repeat the presentation after school since that was when he hosted his history club. I acquiesced and then Tom, my son Sean, and I toured the school. Compared to the rest of the world, our poor live magnificently. While the high school was indeed in a lower-income district, it was palatial compared to the old building in Afghanistan I remember that had been converted into a school for the village children. That same town also had a well built by UNICEF. I looked around a financially struggling school in America and realized I couldn’t really ever convey the sadness I’d encountered, nor adequately express how good we have it here to people who hadn’t witnessed what I had seen. We truly are a modern Rome.

After my second presentation, which was well-received and included a decent discussion on the emerging situation in Homs, Syria, we finished for the day. Tom took us to a bar near the high school where we enjoyed a few beers with some of his colleagues, and he thanked me for my time and perspective. It was I who was humbled, however, since I never really thought anyone would want to hear anything I had to say (my Marines and Corpsmen never having had a choice).

All told, I served nearly three years in Afghanistan. As the years passed, and with each subsequent deployment, I thought about that presentation and the girl’s question. This year, as the last C-17 departed Afghanistan, it took the last vestige of hope for that forlorn country with it.

Thinking of that boy so badly wounded from long ago, I can’t help thinking the saddest thing I witnessed is our Nation’s abandonment of a country and its people. We left them to a predictable fate that unfolds daily before our eyes.

The war has ended. We veterans are alone with our own sense of guilt and individual shame or pride. We have to accept things as they are. However, had I not served at all it would have been a towering regret. I am proud to have been a part of it. Even if, sometimes, it feels a bit demoralizing.

Ivan F. Ingraham is a retired Marine Corps Officer. He served 24-years as a Special Operations Officer, serving worldwide in conflict zones on three continents. This is his first submission to Task & Purpose.