No, The Army Has Not Lost The Art Of Leadership

Recently, a syndicated Task & Purpose article on Army leadership received some buzz, partly because of its eye-catching title and... 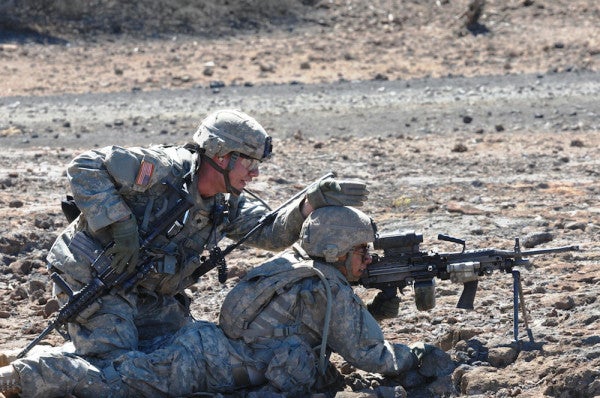 Recently, a syndicated Task & Purpose article on Army leadership received some buzz, partly because of its eye-catching title and partly because many agreed with its thesis. The author’s main point is that the Army focuses too narrowly on unimportant details as a way to lead instead of taking in the broader character of the soldier in order to lead him. Under the pseudonym CombatCavScout, the author writes:

You see, the “haircut” definition of leadership is leader-centric. …. Leadership shouldn’t focus on what I can do about me. It should be focused on how well I take care of my soldiers. I can shave my head bald and score a 400 out of 300 on my PT test, but that doesn’t mean I can lead soldiers. If I can’t help them take care of their problems, if I can’t get them to believe in the mission, if I can’t get them to come together as a group to accomplish a task, then does it really matter how quickly I can run two miles?

Unfortunately, due to a negative run-in with a sergeant major, the author mis-applies some inductive reasoning. He assumes that a few rough experiences in his unit means that the Army — the total U.S. Army of 1,057,720 soldiers and 237,551 Department of the Army civilians — has lost its way. The art of leadership is gone. This is a very provocative statement, but thankfully flawed.

The author addresses what he sees as the “art of of leadership:”

We as leaders have come to believe that leadership is all about us, but it’s not. Leadership is about being a servant to those you lead. … The world doesn’t begin and end at your own personnel file. If you think a soldier is more likely to follow you because you have a high-and-tight haircut, rather than because you show that you’re willing and able to take care of those under your charge, you have lost your way.

The author uses the “all sergeant major cares about is haircuts and physical training” trope of leadership that so many young company-grade officers grumble over from the back benches of command and staff meetings. Consider instead how powerful it is to have a seasoned noncommissioned officer corps and tested institutional knowledge in the ranks that few other nations can match. After around 25 years of service, the sergeant major should have a perspective that has a little more depth than the Army ROTC classes on which the author benchmarks his leadership worldview: that leadership can start with a haircut.

Related: The Army has lost the art of leadership »

Haircuts, physical training, height and weight standards, and (gasp) wearing a reflective belt when the local policy requires it, are all small indicators of the discipline required not only to soldier, but to lead. But if these measures of a disciplined mindset are incongruent with what Army leadership should be, the first few pages of every Army regulation describes how to suggest changes.

To borrow another trope, if one cannot do the small things, how can he be expected to do the big things? Yes, the sergeant major may have a point even if the logic was not clear initially. If an officer cannot get a regular haircut or score well on an Army physical fitness test — that is commit the time, will, and effort to improve and maintain — then I would have instant doubts over his leadership abilities. Believe it or not, leadership starts with the leader, despite what the author thinks. His point — if one cannot lead soldiers, then haircuts and PT scores do not matter — denies the antecedent. Instead, lead through the small things in order to be in a position to have an impact on the big things.

Appearances in general count in the military much like they do in life. Just as an officer without a Ranger tab stands out in an infantry battalion, or any senior soldier without a combat patch stands out within the community, the tendency is for an outside observer to judge an individual’s competence based on a few pieces of cloth and thread. Some of these snap judgements may be unfair since circumstances often dictate the collection of skill tabs. And it runs against the egalitarian grain young officers may imagine we have in the military. But we put rank, ribbons, and tabs on our chest to indicate authority and seniority, prove skills, and stand out. Our evaluations, record briefs, and official photos separate us at the promotion board. Despite what the author believes, the world often does begin and end at one’s own personnel file. In a short sense, try getting promoted without a strong file. But in a larger sense, one’s official record is the best (but not perfect) option and perhaps most objective indicator of leadership performance and potential. If there is a better tool out there, I am sure some very senior leaders would be interested in knowing.

I feel for the young E-4 analyst the author describes who was a genius in his staff job, but could not pass an Army physical fitness test. I have been in this position where, as a commander, I had to separate a phenomenal soldier who simply could not make his weight limit. His problem was a hormone imbalance, not a lack of battery leadership. The issue — or more rightly, the standard and work requirement — is that weight standards, like physical fitness, are requirements for employment in the Army. Although the E-4 in the original author’s case was a good analyst, he was not a good soldier. Yes, he was paid for his analyst skills, but he is also paid to stay fit, deployable, and physically capable of handling austere, stressful combat environments.

The author, as well as so many other motivated and well-intentioned leaders, may suffer from another pitfall of leadership: filling the role of caretaker more than a leader who embraces a mission and organizational focus. His men are his children who are all good guys, misunderstood, and heartbreakers when they get into trouble. They only lack the right kind of external motivation from a very specific NCO or officer. This is the Col. Keith Davenport model of leadership where the commander covers for his troops despite their repeated, often-deadly errors, and at the expense of the wider mission. In the 1949 movie “Twelve O’Clock High,” the bomber commander, Col. Davenport, did exactly this by covering for a young lieutenant who, through a navigation error, caused the the death of an airman and other lost aircraft. Davenport excused the error. Although he was wildly popular with his men, Davenport failed in his wartime mission. When the commanding general asked Gregory Peck’s character what he believed Davenport’s problem was, he diagnosed it succinctly. “He's gonna bust wide open. And he's gonna do it to himself, too. Why? Because he's a first rate guy… ‘over-identification with his men,’ I think that's what they call it.”

Servant-style leadership can only go so far until it becomes harmful to the broader organization. The problem is that “taking care of soldiers” is so often misunderstood. Narrowly, it implies making sure they are paying their bills, receiving the right training, maintaining their family, receiving time off and awards, or a host of other feel-good ends. And certainly, these points are important, but they are only means to a specific end: accomplishing the mission and improving the organization. If a soldier is not paying his bills, or taking care of his family, then he will have trouble training, deploying, and accomplishing his wartime mission. If he is not receiving the right leadership training at the right time, he has little chance of advancing through the ranks. Then the Army, as an organization, will be robbed of more senior NCO and officer talent it needs to operate.

Taking care of soldiers should include building discipline, holding them accountable as soldiers and adults, and letting them go when they simply cannot meet the requirements for employment in service. Yes, joining the military while at war is admirable. Training is demanding. Deployments are dangerous. And everyone wearing the cloth of this nation understands the risks. But we are also all volunteers and nothing outside of a temporary service obligation or term of enlistment is forcing us to stay in the ranks. The Army is service, but it is also employment and no soldier is owed a job if he or she cannot maintain the standards of the profession.

Balancing mission accomplishment and organizational improvement with care of soldiers is the art of leadership and the Army has not lost this. Although it may be imperfectly applied, the art has only been improved over time. Look at the officer force reduction as an example. Although the Army and its budget require a slimmer force, leadership at every level has treated officers and their families identified for separation with care and compassion. No other organization of the Army’s size transitions its members from workplace to retirement better. And few businesses in the civilian world offer its members a financial safety net during hard times. Although these examples may appear like Army altruism — and they partly are — they are just as important in maintaining a solvent organization, promoting a positive Army image, and keeping soldiers financially fit to fight.

I am excited that the author of the original article feels so passionately about leadership to contribute to the professional discussion. Certainly, our Army’s leaders should write and contribute more. Take heart, CombatCavScout. The Army has not lost its way. And a few bad experiences should not jade you or dissuade you from providing the right kind of leadership our Army needs. For my part, it is only half of your discussion. But if you disagree, I’m on the Global.