"Taking college classes at night to earn a degree is one thing, but being able to earn the degree while taking an NCO PME course is something quite different." 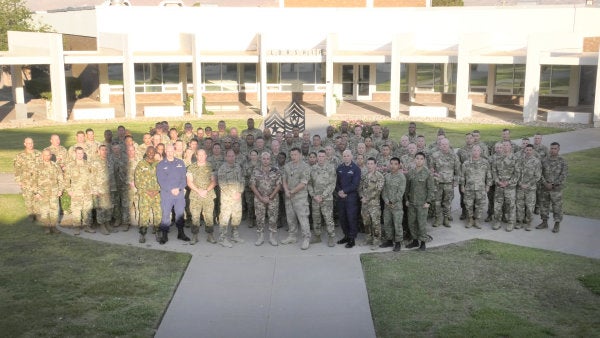 Soldiers attending the U.S. Army Sergeants Major Academy can now put those coursework hours towards earning a bachelors degree, in an effort to bring “enlisted education up to par with officer education.”

Charles Guyette, director of policy and governance for NCOLCE, told Army Times that this is the “first time any NCO course will be accredited to a degree program.”

David Crozier, Director of Command Communications at the NCO Leadership Center of Excellence, told Task & Purpose that there are “92 students in the current class that will graduate with a Bachelor of Arts in Leadership and Workforce Development” (LWD).

“This is an historic event for the NCO Corps,” Crozier said. “And will set the stage for all of our NCO Professional Development System courses to follow the same path, college accreditation. … Taking college classes at night to earn a degree is one thing, but being able to earn the degree while taking an NCO PME course is something quite different.”

The 10-month course comes out to 47 credit hours, according to the Army's announcement — a little over a third of the required 120 hours to earn a bachelor's degree. The 47 hours hit on four focus areas: Leadership, Military Decision Sciences, Training Program Management, and Communication Skills.

This feeds into the Army's efforts to portray joining the service as an investment in an individual's future, something leaders have been working to do in order to increase recruitment and retention.

“Achieving accreditation is also another way we are adding value to our Soldiers' service,” Army Sgt. Maj. Daniel Dailey said in the Army's press release. “We are building readiness and developing highly-skilled leaders with competitive skill sets.”

If you've already graduated from USASMA, however, you're unfortunately out of luck. Per Army Times, the course has been “fine-tuned” in order to be accredited. Soldiers who complete the course will get their degree from the Command and General Staff College at Fort Leavenworth, Kansas, Army Times reports, which is accredited by the Higher Learning Commission.

WATCH NEXT: An NCO Faked His Way Into The 82nd Airborne