A Chinese Aircraft Performs ‘Unsafe’ Maneuver Near US Spy Plane

The Pentagon announced on Tuesday that a Chinese aircraft performed an unsafe maneuver on Sept. 15 during an air intercept... 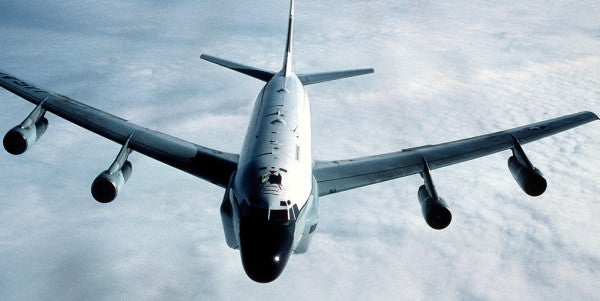 The Pentagon announced on Tuesday that a Chinese aircraft performed an unsafe maneuver on Sept. 15 during an air intercept of a U.S. spy plane. The announcement comes as Chinese President Xi Jinping begins a week-long visit to the U.S. and may underscore rising tensions between the two powers.

“The pilot reported that he felt … the aircraft passed in front of his nose in an unsafe fashion,” Cook said. “There's no indication this was a near collision.”

This is not the first time that U.S. and Chinese aircraft have gotten too close for comfort. In August 2014, a Chinese warplane flew as close as 20 to 30 feet to a U.S. Navy aircraft, and then conducted a barrel roll over the plane. However, Cook said the two incidents were not similar.