In the first installment in an ongoing series by the Military Times, Hope Hodge Seck describes how an all-female, anti-armor... 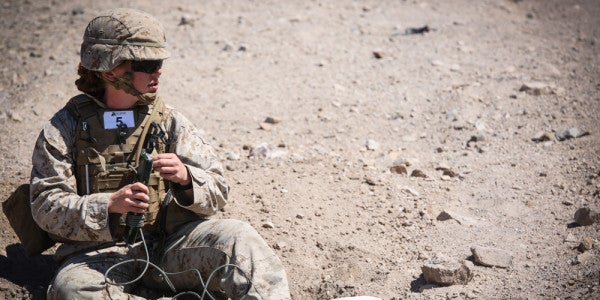 In the first installment in an ongoing series by the Military Times, Hope Hodge Seck describes how an all-female, anti-armor team carrying their combat load, in addition to their weapons and packs, overcame obstacles during a combat assessment.

“In the four-woman team of a corporal and three sergeants, no member stands taller than 5 feet 4 inches. When they approach an 8-foot obstacle made out of a shipping container, it looms over them. But their movements are practiced,” Seck writes.

“Without wasting a motion, three Marines approach the wall and hunch down, allowing a teammate to scramble over them to the top. They then repeat the process with two women at the wall's base. Then one Marine boosts her teammate up. When the last Marine remains at the base of the wall, the three at the top lower down a stirrup made of three Marine Corps Martial Arts Program belts buckled into loops and linked together. The Marine at the wall settles her boot inside the belt contraption and gains a few feet on the vertical obstacle, reaching the waiting hands of her teammates, who pull her the rest of the way over.”

As the Marine Corps’ gender-integrated, combat assessments come to a close, ingenuity in the face of adversity appears to be a hallmark of the Corps’ first female grunts.