Former Milwaukee Sheriff David Clarke — a bombastic conservative commentator known for his penchant for cowboy hats and love of... 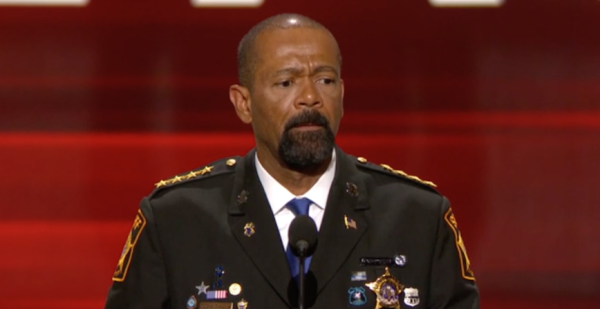 Former Milwaukee Sheriff David Clarke — a bombastic conservative commentator known for his penchant for cowboy hats and love of fruit salad — may lose his master’s degree from the Naval Postgraduate School if he doesn’t revise his thesis, which was submitted in 2013.

Clarke, a registered Democrat, who resigned his post on Aug. 31 and was reportedly offered a chance to join the Trump White House in May, was found to have plagiarized substantial portions of the submission, entitled “Making U.S. Security and Privacy Rights Compatible.”

Clarke borrowed language from various sources without proper citation on 47 occasions throughout the paper,” according to CNN’s KFILE. “Clarke lifts language from sources and credits them with a footnote, but does not indicate with quotation marks that he is taking the words verbatim,” the report stated.

CNN found that, per Naval Postgraduate School guidelines, “If a passage is quoted verbatim, it must be set off with quotation marks (or, if it is a longer passage, presented as indented text), and followed by a properly formulated citation. The length of the phrase does not matter. If someone else's words are sufficiently significant to be worth quoting, then accurate quotation followed by a correct citation is essential, even if only a few words are involved.”

Clarke rose to fame through his prolific use of social media. He holds staunch positions on illegal immigration, Black Lives Matter, and patrolling Muslim neighborhoods, among many other hot-button political issues. His treatment of inmates in the county jail, in particular, has drawn fire, especially after one, Terrill Thomas, died after being deprived of water for seven days.

Although Clarke was not charged in that case, his scholastic infractions are not being taken lightly.

“Like all academic institutions, the Naval Postgraduate School takes the integrity of our students' work very seriously, perhaps even more than our peers given the unique nature of our mission and student body,” Lt. Cdr. Clint Phillips, a public affairs officer with the Naval Postgraduate School, told CNN. “Standard procedure to any formal accusation of plagiarism is to pull the student's thesis, and perform an investigation into the validity of the claims.”

One of the most divisive political figures in Milwaukee, Clarke resigned without explanation. He claims to be joining a pro-Trump political action committee, CBS News reported on Sept. 15.