Fellow military history buffs and shooting enthusiasts rejoice, good news is coming your way: An amendment to the 2018 National... 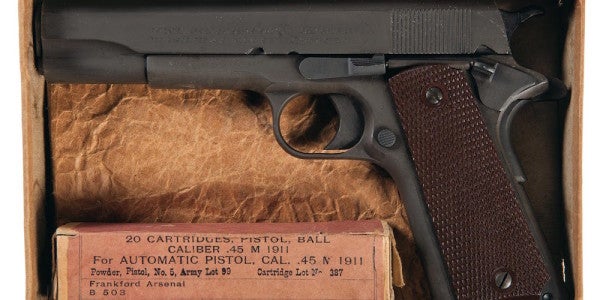 Fellow military history buffs and shooting enthusiasts rejoice, good news is coming your way: An amendment to the 2018 National Defense Authorization Act is set to allow the U.S. Army to, at long last, sell off its surplus Colt M1911A1 pistols.

The Army currently has around 100,000 surplus Colt 1911A1s, the iconic sidearm used throughout both world wars, as well as the fighting in Korea and Vietnam. But by the 1980s, the 1911 had officially been replaced, shunted aside for the sleeker Beretta M9. Now, in a Lion King-esque circle of life, the M9 too has reached its expiration date, and will follow the venerable 1911 into the great beyond (err, storage facilities), as the Army begins to receive shipments of shiny new M17 Sig Sauer pistols.

This day has been a long time coming: In late 2015, President Obama signed the 2016 National Defense Authorization Act, which included a provision authorizing the Army to transfer 100,000 surplus pistols to the Civilian Marksmanship Program as part of a one-year pilot program. The program was then given the green light to sell up to 10,000 of the guns per year. Alas, the transfer never took place, and civilian shooters itching to get their hands on a significant bit of U.S. military history were left sorely disappointed. Now, their wait my soon be over.

On July 14, House lawmakers passed the 2018 National Defense Authorization Act, along with an amendment tacked on by Republican Rep. Mike Rogers of Alabama. Rogers’ amendment, if okayed by the Senate, will allow the Civilian Marksmanship Program to receive, inspect, grade, and prepare the surplus 1911s for sale to the waiting public.

The CMP, a program that has spanned more than a century, has a storied past itself. Created back in 1903, the CMP has long offered civilians the chance to learn the ins and outs of some of the U.S. military’s most well-known service weapons. The program is perhaps best known for selling off the military’s surplus M1903s and M1 Garands,thelegendary infantryrifleusedthroughoutWorld War IIandKorea.

In parting with excess, outdated guns, the Army will save a little cash as well. Storing surplus weapons is more expensive than you’d think (representatives from Rogers’ office have estimated the cost at around $200,000 per year). With that in mind, Army officials are psyched to sell off the pistols to open up storage space for the M9s, as soldiers transition to the Modular Handgun System’s M17 and M18 pistols.

So cross your fingers, history buffs and firearms lovers. With a bit of luck, you’ll soon be holding your own personal piece of U.S. military history, an iconic Colt 1911.