We may earn revenue from the products available on this page and participate in affiliate programs.   The Army has... 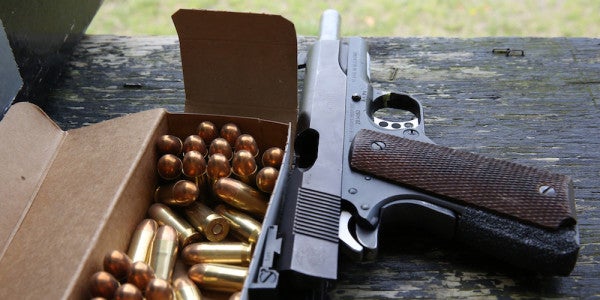 The Army has officially transferred the first of its surplus M1911 pistols to the Civilian Marksmanship Program for commercial sale — and if all goes according to plan, the trusty sidearms may start flowing into civilian hands as soon as August.

In a Jan. 29 update to members, the federally chartered CMP announced that following a complete inventory of the M1911s, the weapons “will then be securely stored until the Army-approved 1911 building and armory infrastructure” is complete, a process the CMP estimates will take roughly 60 days. After that, the CMP will subject each pistol to a rigorous inspection, repair, and test-firing process, one that members told Task & Purpose they estimated to last about 150 days, based on prior experience.

Together, those steps could translate CMP rolling out its first batch of M1911s to civilian buyers around August. The organization told members it plans on releasing the pistol’s official order packet “90 days prior to the order acceptance date and opening sales date.”

“I'm thinking that means they will be ready to go sometime between August and October,” Mark Gates, a Navy vet and junior rifle team coach who received the CMP’s latest member update, told Task & Purpose. “If the paperwork is going to go live 90 days earlier, we could see that happen in June time frame.”

Waiting patiently for the order form to appear online won’t expedite the arrival of your shiny Colt .45, however. In December, the CMP announced that the customer orders for its first 10,000 surplus M1911s will end up in a “Random Number Generator” — leaving customers to “be contacted in the sequence provided by the Random Number Generator.” Basically, a lottery will determine if you’re first in or stuck with whatever’s left.

As for pricing: We still won’t know for certain how much these babies will run until each inspection and grading occurs — so, 60 days from now. Or longer, given that most of the Army’s surplus M1911s were manufactured before 1945. But according to CMP North marketing manager Steve Cooper, each CMP-tested pistol will likely run “between $800 and $1,000.”

In the meantime, you’ll just have to wait. If you can manage. According to the CMP’s latest update, the organization has been “inundated with calls and emails” about the status of the surplus M1911s. I know, I know: We’re excited too.