An active duty U.S. Navy officer, his wife, and two Chinese nationals have been arrested and charged with attempting to smuggle military style boats and outboard motors to China 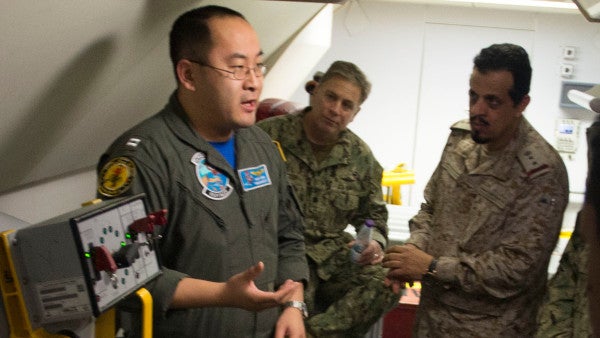 An active duty U.S. Navy officer, his wife, and two Chinese nationals have been arrested and charged with attempting to smuggle military style boats and outboard motors to China, according to a Department of Justice press release.

Prosecutors say Lt. Fan Yang, 34, of Jacksonville, Fla., and his wife Yang, 33 — both naturalized citizens — conspired with Chinese nationals Ge Songtao, 49, and Zheng Yan, 27 in a fraudulent attempt to export seven small inflatable boats and eight engines made for military use.

All four were arrested on Oct. 17 and are currently detained, the release said.

All four defendants have been charged with conspiring to submit false export information and to fraudulently attempt to export articles from the United States. Additionally, Yang Yang, Ge Songtao, and Zheng Yan have been charged with causing the submission of false and misleading information into the U.S. Automated Export System, and fraudulently attempting to export seven vessels and eight engines. If convicted for conspiracy or for the submission of false export information, the charged defendants each face a maximum penalty of five years in federal prison. If convicted on the attempted-smuggling charge, the defendants each face a maximum sentence of 10 years in federal prison.

Fan Yang, Yang Yang, and Ge Songtao are charged with other offenses as well. All three have been charged with conspiring to violate laws prohibiting an alien admitted under a nonimmigrant visa from possessing a firearm and prohibiting the transfer of a firearm to a nonresident. Fan Yang has also been charged with making a false statement to a firearms dealer, which carries a maximum penalty of 10 years' imprisonment, and with making false official statements in his application for a security clearance, which carries a maximum penalty of five years' imprisonment.

Fan Yang, the Navy officer, was born in China and came to the U.S. in 1999, later becoming a citizen in 2006. He enlisted in the Navy in Sept. 2005 and was honorably discharged in 2007, according to records released to Task & Purpose by the Navy.

After getting out, Yang obtained a bachelor's degree in electrical engineering and came back into the Navy in 2012 as a naval flight officer. Yang, who holds a top secret clearance, was stationed at Naval Air Station Jacksonville at the time of his arrest, where he had been serving at the Maritime Patrol and Reconnaissance Weapons School.

This article was updated on Nov. 1 at 7:34 p.m. PDT with more details on Yang's military record.