After 5 Years, ‘Duck Dynasty’ Announces This Season Will Be Its Last

Liberal Twitter hasn’t had much good news lately, which may be why the news that A&E;’s “Duck Dynasty” — once... 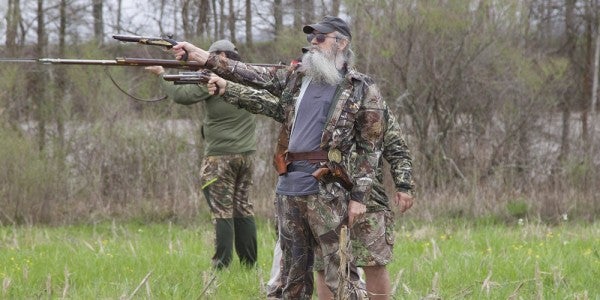 Liberal Twitter hasn’t had much good news lately, which may be why the news that A&E;’s “Duck Dynasty” — once the most watched reality TV series in cable history — is ending after a five-year run has been generated so much delight on social media.

I am, of course, talking about his wife.

It’s sad that DUCK DYNASTY has come to an end after 5 years. Good news, though. They’re all being given cabinet positions in Washington!

Duck Dynasty is getting canceled. Sorry republicans, you can't have the house, senate, presidency, AND the television.

The Robertson family made a “big quacking announcement” on Nov. 16, when they revealed that the reality television show is calling it quits. After 11 seasons of mucking around in Louisiana's swamps and shouting catchphrases — by turns charming and infuriating the American TV-viewing public — the heavily bearded duck-hunting Robertson family is heading south, for good.

Related: Civilians Get A Taste Of Elite Military Training In New Reality Show »

On the show’s Nov. 16 episode and in a post to Twitter the same day, they announced the series will end after this season. The series finale will take place on April 12.

SPOILER ALERT: The Robertsons made a big quacking announcement. Join your #DuckDynasty family for new episodes Wednesdays at 9/8c on @AETV. pic.twitter.com/uw7Ei0y3xL

But don’t feel too bad for the Robertsons. As Donald Trump proved, a successful reality TV career can be one hell of a stepping stone.