The War In Syria, As Told By Brian Williams

War is uncertain. Reporting live on war’s uncertainties is tough. Fortunately, MSNBC’s Brian Williams is certain of many things about... 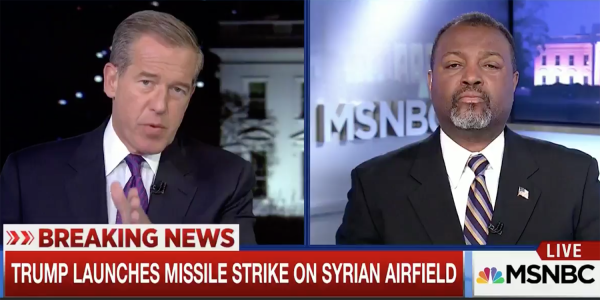 War is uncertain. Reporting live on war’s uncertainties is tough. Fortunately, MSNBC’s Brian Williams is certain of many things about war, even things that never happened, and last night, he was certain that the U.S.’s nighttime Tomahawk launch ops were beautiful, just beautiful — as beautiful as a lefty Canadian folk singer’s lyrics. You go to war with the anchormen you have. Here’s how our newest war will unfold, according to Anchorman First Class Williams.

“We see these beautiful pictures at night from the decks of these two U.S. Navy vessels in the eastern Mediterranean. I am tempted to quote the great Leonard Cohen: ‘I am guided by the beauty of our weapons.’ Um. And they are beautiful pictures of fearsome armaments making for them a brief flight over this airfield. What did they hit?”

Brian Williams refers to this Pentagon video of missiles going to kill people as "beautiful" 3 times in 30 seconds pic.twitter.com/KBb3tP8qHT

“As we all wait with bated breath for news on the fate of that F-18 pilot who was shot down by Russian air defense batteries in northern Syria, our thoughts wander with the fog of war. My thoughts in particular go back to when I was Russian. Uh. Working as a sleeper spy in the Cold War, sent with my wife, the incomparable Keri Russell from Felicity, to America’s heartland to tease out her darkest secrets.

“But of course, I came in from the cold. Like the song goes, ‘I've travelled the world to learn/I must return/From Russia with love.’ Secretary Tillerson, as you hash out these tense negotiations with Russian and Syrian counterparts: Does love renew you?”

BRIAN WILLIAMS [watching a hospital explode]: I heard there was a secret chord, that David played when he bombed Assad. I am born anew today

“The Syrian government suicide bomber who attacked our special operators outside Aleppo may not have inflicted any casualties, but he’s ingrained himself in our souls with the spectacular cloud of nails and viscera ballooning in a way that feels elemental, primal. It really gives you a window into the infinite.

“Mm. I am reminded of the Beatles line: ‘I read the news today, oh boy, 4,000 holes in Blackburn, Lancashire.’ This war is opening up many holes in many places, not least of all our hearts. My question for you, Senator Rubio: How do you deal with so much beauty in the world?”

“So we have that launch of the Russian submarine-based ballistic missiles in the direction of the Mediterranean Sixth Fleet, and now we wait to see what the damage will be. One can envision what my former shipmates in the Navy call ‘class delta fires,’ when the metal burns with the light and heat of a star. ‘We are all made of stars,’ Moby once told us. Soon, it may be true. Admiral, from your experience with global great power wars, what poems sustain you during times of adversity?”

“Stephen Bannon, former senior adviser to the president, I’m going to have to cut you off there, we have breaking news. Ladies and gentlemen, this is happening right now: My helicopter, a special operations Blackhawk with the 160th, was just shot down over Homs. A search for survivors is underway, but I am told that I did not make it, despite gallant attempts to autorotate our bird down with my one good arm.

“It’s really something. The final moments of my life and distinguished service call to mind Dave Matthews’ dulcet lines: 'Tied up and twisted the way I'd like to be, for you, for me, come crash into me.' Let’s turn to retired colonel Jack Jacobs for some perspective on this moment. Colonel, what was your Medal of Honor ceremony like? What should I expect, going into this process posthumously?”