Zumwalt Captain: She’s ‘Like A Very Souped Up SUV’

Oct. 15 marked the commissioning of the U.S. Navy’s newest and most technologically advanced destroyer. Task & Purpose got to... 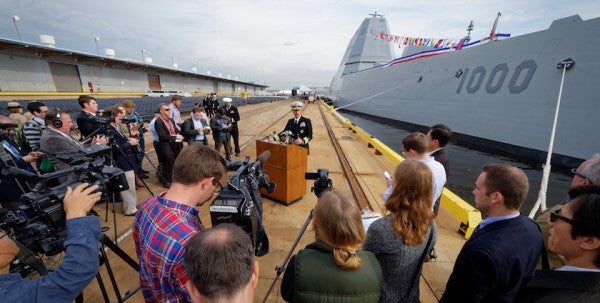 Oct. 15 marked the commissioning of the U.S. Navy’s newest and most technologically advanced destroyer. Task & Purpose got to visit the ship during its first public appearance in Baltimore on Thursday.

Capt. James Kirk (his real name) is very excited about his new ship, and her namesake, Elmo “Bud” Zumwalt. Adm. Zumwalt was chief of naval operations in the latter stages of the Vietnam War, and a progressive leader for the Navy in difficult times.

Kirk noted that Zumwalt was “a great man, who reformed the Navy to make it a more just institution.” On their cruise from Bath Iron Works in Maine to Baltimore for the commissioning ceremony, the crew stopped in Annapolis and visited the late admiral’s grave at the Naval Academy. They chose the motto “Pax Proctor Vim,” meaning peace through strength in Latin, to honor Adm. Zumwalt. It was the motto of the destroyer Zumwalt commanded.

As for the ship itself, Kirk was enthusiastic.

The ship “rides marvellously in all the seas we have experienced,” he told reporters.

Kirk’s chief engineer, Lt. Cdr. Nate Chase, said that during builder’s trials, they rode through 16-foot waves at times, but that the ship handled them better than the Arleigh-Burke-class destroyers that are the backbone of today’s fleet.

One of USS Zumwalt's MQ-8C Fire Scout autonomous helicopters on board the ship. Guided missile cruiser USS Leyte Gulf is in the background.

Zumwalt has a lot of features that will be unfamiliar to crews of other destroyers. The ship’s all-electric propulsion is powered by two primary and two auxiliary generators, which can produce a staggering total output of 78 megawatts.

Unlike the DDG-51 class destroyers, Zumwalt has two forward Advanced Gun System 155mm guns, with a high rate of fire and the ability to fire precision-guided munitions.

To give it the lowest possible radar cross-section — one-fiftieth that of the Burke class — the ship has odd shapes and few right angled connections anywhere topside. It also features a “wave-piercing” hull shape that gives it its distinctive inward-sloping “tumblehome.”

The ship’s strange looks aren’t the only unusual thing about her. Chase said the ship is built to metric, rather than English, specifications. The metric frame numbers were “a little confusing” for crew members early on.

The most exciting thing for sailors might just be the accommodations. Instead of berthing areas holding 50 people or more, sharing beds in the common but unpleasant practice of “hot bunking,” even the most junior members of Zumwalt’s crew live in four-person staterooms, with their own shower and toilet.

In spite of the famous namesake of the Zumwalt’s Capt. Kirk, and in spite of the 78 MW of power available, Chase said Kirk has never once called him “Scotty” or asked for “more power.”

“He’s called me plenty of other things,” Chase said with a smile. “But never that.”