In the wake of the June 12 massacre at a gay nightclub in Orlando that killed 49 people and left... 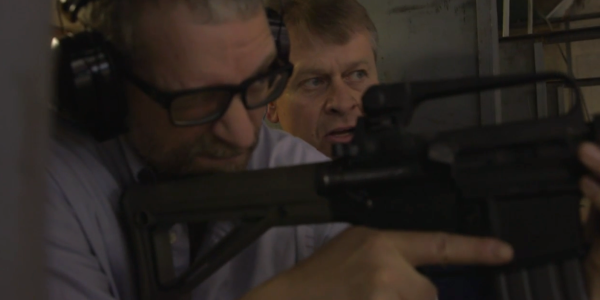 In the wake of the June 12 massacre at a gay nightclub in Orlando that killed 49 people and left dozens more wounded, New York Daily News, a newspaper that has historically taken a strong stance in favor of assault rifle bans, dispatched one of its journalists and an intern to a gun range in Philadelphia to “better understand the firepower of military-style assault weapons.”

Fair enough. After a tragic event like Orlando, people often turn to journalists for answers. Here was an opportunity to give readers of the Daily News an objective assessment of what it’s like to fire the same rifle thought to be used in that shooting. If that was the goal, the journalist, Gersh Kuntzman, who, according to the Daily News’ website, is the paper’s deputy features editor, utterly failed to do his job.

Related Why The AR-15 Is America’s Favorite Firearm »

After sharpshooting the shop owner with questions about gun control — “Why is this such a popular gun?” — Kuntzman decided to try his hand at shooting an AR-15, the weapon that initial reports claimed was used by the gunman in Orlando. That has since been disproven. According to The Washington Post, Omar Mir Seddique Mateen was armed with a Sig Sauer MCX. But Kuntzman isn’t a stickler for the facts. As proof, I present to you the opening sentence of his article — titled “What is it like to fire an AR-15? It’s horrifying, dangerous and very very loud” — which offers up this curious assessment of what it’s like to fire a weapon that became the U.S. military’s standard-issue rifle largely because it’s light and easy to shoot:

Yes. That was written by a full-grown man about a rifle I once saw a 2-year-old child shoot with ease on a private gun range in Colorado. This leads me to immediately assume three things: First, Kuntzman has never fired a bazooka. Second, Kuntzman has never heard a cannon. And third, Kuntzman’s ability to use his five senses to assess the physical world is impaired to the point of uselessness, or at least for a guy whose job is to report on and write about that world.

However, Kuntzman’s overblown assessment doesn’t stop there. Not only does he claim the rifle’s recoil bruised his shoulder — which, unless you have the skin of a newborn baby is nearly impossible — he claims the “explosions” of the rifle’s report gave him a temporary case of PTSD.

Let that soak in for a minute. This adult man. This journalist who was dispatched by a credible newspaper to report on the experience of shooting an AR-15 claims that doing so traumatized him so profoundly that he now suffers from a disorder suffered by many of those who’ve used the AR-15’s military-grade cousins — the M4 and M16 — to kill actual human beings in combat, and which many of the men and women who were present in Pulse the night Mateem stormed through the doors with a Sig Sauer MCX will likely suffer for years to come.

“Even in semi-automatic mode, it is very simple to squeeze off two rounds before you even know what has happened,” Kuntzman continues. “In fully automatic mode, it doesn’t take any imagination to see dozens of bodies falling front of your barrel.”

Yes, it does. It takes a lot of imagination. Just like it takes a lot of imagination to compare shooting an AR-15 to shooting a bazooka. That’s like comparing a July 4th fireworks display to Hiroshima, or eating a Wendy’s jalapeño bacon cheeseburger to drinking napalm. It’s not simply inaccurate. It’s pure fantasy. In all likelihood, Kuntzman probably took a few shots at a paper target with the AR-15 and thought, “Oh, well, that was pretty anti-climactic,” and then decided to toss the facts out the window and replace them with the exciting stuff: Bazookas! Canons! PTSD! Bodies!

If gun reform is what you’re after, Kuntzman, and I know it is, you’ll have to do a much better job than that.