The first time I set foot in Iraq was as an Army grunt in 2004. Like most war experiences, it... 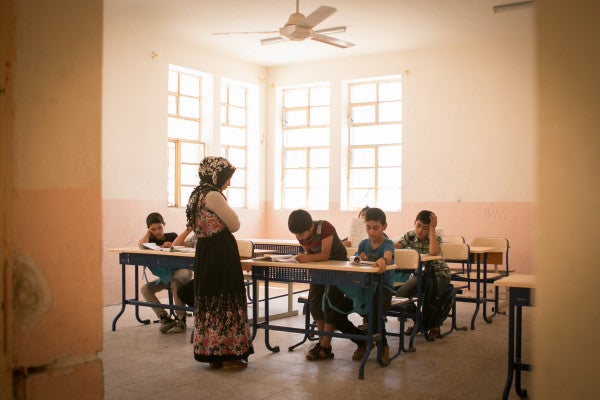 The first time I set foot in Iraq was as an Army grunt in 2004. Like most war experiences, it was an intense one, undoubtedly altering my life trajectory. Mortal combat, unlike most undertakings, has a transformational effect on the mind. In fact, almost any veteran who has ever squeezed the trigger of a rifle or ducked a whizzing bullet in a firefight can draw a thick line across the course of his or her life dividing before combat and after combat. Oftentimes that demarcation happens without notice, almost subconsciously.

I came back home from the war and continued on with school. I deployed again with the Army, this time to Afghanistan. I earned a degree. I left the military. I worked in Washington. I worked overseas. I traveled much of the world. The years passed quickly. I lived my life forward, rarely thinking of Iraq, its endless tragedies, tortured people, and forever wars. The memories, vivid at first, gradually diminished like a warm breath on a cool window. But the war never fully evaporated. Once you experience that side of the human condition, there is no going back.

So when the opportunity presented itself last fall to see Iraq again, a decade after my first taste of combat there, somewhat to my own surprise, I jumped on it. I returned on a 60-day contract with an Iraqi consulting firm that supported the implementation of various USAID and Department of State projects. Based in Erbil, in the northern Kurdistan region of Iraq, my job was to help develop the capacity of several “American corners,” that is, U.S.-funded cultural centers for locals to learn about and “experience” America through books, magazines, movies and other media. My duties consisted of problem solving, putting out fires, writing reports and dealing with people, their egos and interpersonal issues — all tasks in which most ex-Army leaders are well versed.

I spent a good deal of my time bouncing around Kurdistan, both for work and for leisure. I made friends from all sorts of backgrounds: Kurds, Arabs, Assyrians, Chaldeans and Yazidis, among others. If some of these names are unfamiliar to you, don’t fret. I was not aware of the full social complexity of the region either until I returned to live and work among its varied peoples. I enjoyed nights out in cities like Erbil, Dohuk and Sulaymaniyah. I went on kayaking trips. I joined a photography club. I volunteered at several of the Syrian refugee camps. In sum, I had a great time!

If going to war in Iraq was the catalyst for mental transformation, then returning was the impetus for emotional reconciliation. The countless interactions I enjoyed, the meals I shared, the hospitality I accepted and the friendships I forged, cast aside my old feelings of cynicism and detachment. Gone was the justifiable apathy toward this ancient land that I had developed during my tour of duty, as was my exasperation with its forever-squabbling population. To be clear, I did not suddenly embrace a romantic view of Mesopotamia, as some dreamy visitors are prone to do, but I did develop a deeper appreciation for the culture that allowed me to balance some of its virtues against its well-publicized counterparts.

When my contract ended and I flew back home, I knew with certainty that I would be back. Over the next six months, an eclectic group that included many veterans, conceived, designed and planned a small, agile initiative to support the education of displaced Syrian refugee children in Iraq. We called it TentEd. Our focus zeroed in on Kurdistan, where these refugees are concentrated.

For the last month, I’ve been in Kurdistan implementing the project on behalf of the group. By virtue of being a small, targeted operation, TentEd has been able to provide precise support exactly where it’s needed. We solicit requests for supplies and services from educators and officials who have intimate knowledge of students’ needs from working in the schools day in and day out. With comparatively little capital or manpower, we have made an outsized impact.

TentEd is first and foremost about helping people who need help. It’s about showing individuals in need that Americans care. Yet, it’s personal in its approach, centered on people rather than process. For me, it has served as a vessel for reconciliation with an impossibly intense life chapter. Rather than leaving Iraq in my past, I have discovered a new reality and have come to cherish this place.

Zack Bazzi co-founded TentEd, a development initiative supporting the education of displaced Syrian refugees in the Kurdistan Region of Iraq. He is a proud former U.S. Army infantryman.