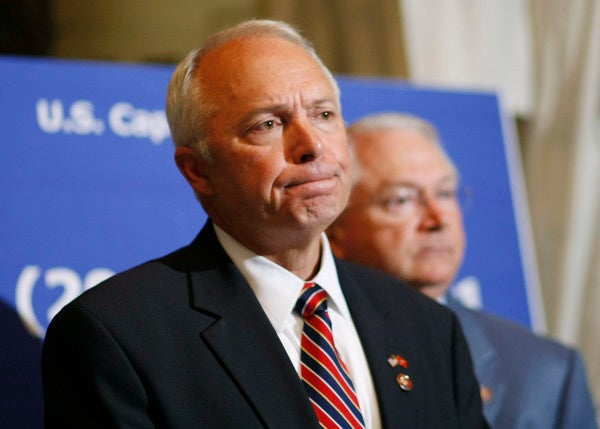 A committee chaired by Sen. Tom Harkin of Iowa issued a report on July 30, which, among other things, highlighted that eight of the 10 largest recipients of GI Bill money were for-profit education companies, yet more than half of students enrolled in the examined schools left before receiving a degree or certificate in the 2008–2009 school year. Additionally, “nearly all students who leave have student loan debt, even when they don't have a degree or diploma or increased earning power.”

The report further indicated that seven of the eight GI Bill recipient companies are presently under investigation at the state or federal level “for deceptive and misleading recruiting or other possible violations of federal law.”

In response to Harkin’s report, President of the Association of Private Sector Colleges and Universities Steve Gunderson disputed the findings, calling it “political theater.”

At the heart of the matter is what is called the 90/10 rule, which bars for-profits from obtaining government funding if they already receive more than 90% of their revenue from federal student aid programs. The sticking point is that this rule does not apply to the GI Bill or the Department of Defense’s education programs for active-duty service members.

At a July 10 hearing by the House Committee on Education and the Workforce, representatives Susan Davis and Mark Takano from California put forth legislation to close this loophole, but it was rejected within 15 minutes. At the hearing, Davis said, “I don’t think Congress ever intended this situation to get out of hand the way it has.”

Both cited a report by the Center for Investigative Reporting on the issue that revealed “more than $600 million in college assistance for Iraq and Afghanistan veterans has been spent on California schools so substandard that they have failed to qualify for state financial aid.”

The University of Phoenix claimed that the report “skewed facts and ignored others to fit an ideological-informed opinion.”

Republican Rep. John Kline of Minnesota, who chairs the education and workforce committee, shot down the bill as non-germane to the hearing. A party line vote of 20-13 ensured its demise. “We should be expanding college access to our veterans not denying them the opportunity to attend the institution of their choice,” Kline said after his ruling.

The biggest recipient of this federal largesse, and the standard bearer of for-profit education, is the University of Phoenix. The company has received nearly $1 billion from the Post-9/11 GI Bill over the last five years.

Phoenix is almost completely dependent on federal money. For the 2013–2014 fiscal year, over 90% of its revenue came from the federal government in the form of student loans, grants and GI Bill and DoD education funding.

Combined with the 83% of its total funding that is received through other federal education programs, this would put Phoenix well over the 90/10 rule if the GI Bill and DoD spending were counted in the mix.

The University of Phoenix was founded in 1976 by former professor John Sperling, beginning with a single class of eight students. It is the flagship enterprise of the Apollo Education Group, also owned by Sperling.

After the company went public in 1994, it grew at an astonishing rate, with enrollment numbers surging at over 25% a year. By 2010, it had hit a peak enrollment over nearly 600,000 students at over 200 campuses all over the world.

The aftermath of the recession and a torrent of bad publicity has taken a hard toll on Phoenix. Since 2010, enrollment at the college is down 60% to 269,000 in 2013, and in 2013 alone the company closed 115 of its campuses. The Apollo Group’s revenue has fallen more than 15% in just the last year.

The brand has taken a beating, and it’s not hard to see why. According to the Center for Investigative Reporting, Phoenix’s San Diego campus has an overall graduation rate of less than 15% and a student loan default rate of more than 25%.

Like many for-profit universities, the University of Phoenix has seen a flood of criticism for abusive recruiting practices. The company spent only 40% of its revenue, or $5.1 billion, on academic instruction over the last three years.

The remaining revenue goes to extensive marketing and lobbying campaigns and profit margins. The university paid $154.5 million for 20-year naming rights for the University of Phoenix Stadium, the home of the NFL’s Arizona Cardinals. This is despite the university not participating in intercollegiate sports.

Though only 13% of veterans who graduate from college attend for-profit schools, they still make up a hugely disproportionate percentage of Phoenix’s student population, and the GI Bill spending that goes with it. For example, the University of Phoenix campus in San Diego has received $95 million in GI Bill payments since 2009. That is more than any other college campus in the entire country, exceeding what the entire University of California system with its 233,000 students receives, compared to a campus of just 6,686.

The fact that a college with such a poor graduation rate and uncertain job prospects for graduates is getting such a windfall has not gone unnoticed at the state level. California has banned the University of Phoenix from enrolling veterans in seven of its programs after an audit determined they already comprised 85% of the student population.

But on Monday, the VA moved to lift the ban citing new information from the college. “CalVet considers the matter closed,” Deputy Secretary of the California VA Keith Boylan said in a statement.

It is obvious that the University of Phoenix knows where its bread is buttered. Federal lobbying records show that the Apollo Education Group has spent $4.8 million since 2009. Since Kline became chairman of the education and workforce committee, Apollo has been his largest campaign contributor, dishing out $48,100 in contributions since 2011.

Eighty-three percent of Apollo’s political action committee spending goes to Republican candidates. This is jarring since John Sperling and his son Peter, who took over after his father’s retirement, are both well-known donors to progressive causes and Democratic candidates. John Sperling was one of Arizona Democrat Gabby Giffords’ biggest contributors.

That the owners donate to one party while their company donates to another shows that the Sperlings know how to cover all their bases in Washington, and it has paid off well. Peter Sperling is estimated to be worth $1.3 billion.

School administration can be a well-paid gig, with the average executive compensation at the nation’s top 25 universities reaching nearly $1 million in 2012.

Clearly, the Sperlings are way ahead of the curve.