Our thoughts and prayers go out to them and their families. 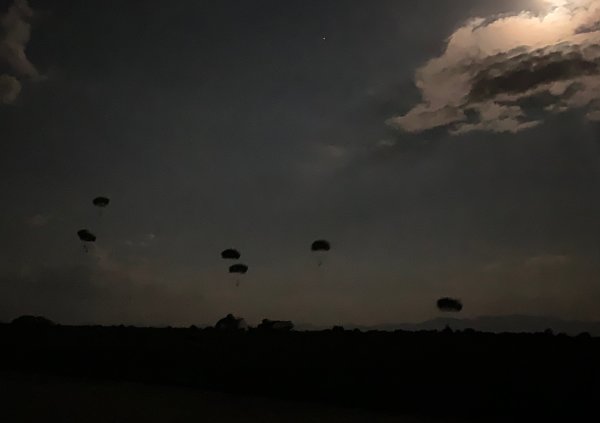 At least 18 Army paratroopers were injured on Wednesday during a nighttime training jump at Camp Shelby, a Joint Forces Training Center run by the Mississippi National Guard.

According to CNN, three aircraft were in use during the exercise being carried out by the Alaska-based 4th Brigade Combat Team, 25th Infantry Division. Capt. Ashley Sangster, 25th ID spokesperson, told CNN that during the first pass at one of the two drop zones, something went wrong, though officials are still working to determine what happened.

Daniel Szarek, a spokesman for Camp Shelby, told Task & Purpose on Wednesday that some paratroopers had “missed the intended drop zone.”

“This is an ongoing investigation and more information will be released as it becomes available,” he said.

Approximately 650 soldiers took part in the jump at 8 p.m. Eastern time, the unit said on its official Facebook page.

Lt. Col. Matt Myer, commander of 1st Battalion, 501st Parachute Infantry Regiment, said in a Facebook post on Thursday morning that 87 paratroopers from the brigade had landed in trees, with some being stuck so high that “they required significant recovery support.”

Of those 87, there were 18 paratroopers that were injured, Myer said. One soldier required surgery for a broken back but is expected to recover.

“Service as a paratrooper requires a level of toughness that most do not understand,” he said. “Despite the difficulty of this training jump, the battalion performed well and will recover well to continue our training mission.”

The brigade has been training at Camp Shelby for several days as part of exercise Operation Arctic Anvil.

Camp Shelby Commander Col. Bobby Gin told WDAM-7 the wind blew the paratroopers away from their drop zone into pine trees, where some had to be rescued after becoming entangled.