Army Staff Sgt. David Bellavia says he likely wouldn't have made it out of the Second Battle of Fallujah alive had it not been for his knife 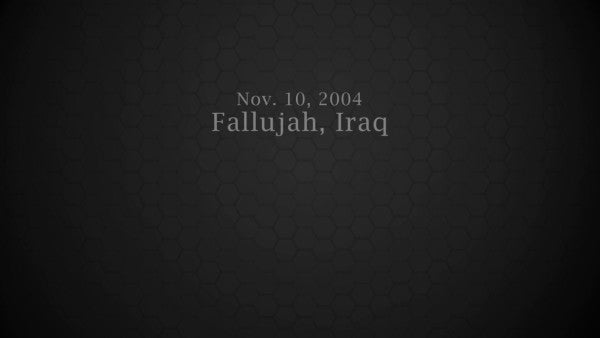 Bellavia was awarded the Medal of Honor in recognition of his heroic actions of Nov. 10, 2004, when he killed five enemy fighters during a chaotic battle inside an enemy-held house during the second battle of Fallujah, rescuing an entire squad in the process.

But according to Bellavia, he likely wouldn't have made it out alive had it not been for his knife.

During a Monday roundtable, Bellavia
described engaging enemy fighters inside the dark house full of propane tanks and plastic explosives, first with his M4 carbine and then with an M249 Squad Automatic Weapon.

But after killing four insurgents, Bellavia was confronted by a wounded fighter who engaged him in hand-to-hand combat, forcing the soldier to pull out his
Gerber Rex Applegate folding knife and kill him.

Here's how Bellavia described the encounter in a 2006 oral history of second battle of Fallujah:

I was covering his mouth, telling him to shut up. His breath was horrible, just stale, nasty breath. The moral of the story is that the dude bites my left hand near the thumb knuckle through my glove. I open up my SAPI plate and hit him with the inside of my vest. He's screaming, there are people screaming downstairs and I have no composure at all. This is not a John Rambo moment. I'm really scared. I stand up and he digs into my leg with his fingers. I'm looking for my Rex Applegate Gerber knife: not a multi-tool, just a serious blade. I go to reach for it and he puts his teeth — I don't wear underwear and he bites me right in the genital region.

I don't know if he thought I was going to give him mercy, but in the struggle my Velcro knife case slid off my belt and was now on the ground next to his head. I hear someone yell down from above me in a panic. The man underneath me yells back. The more I put pressure on his left arm the more he goes limp. I flick my blade to the side and it snaps to the ready. I had never stabbed anyone before so I went down on him with a stabbing motion. I lost the grip on the knife and it went right across the base of my right pinkie finger. As soon as I let it go, a hot wave hit me and it smelled like rust. I put one hand on his mouth and other under his chin and just started to push like I was giving him CPR. The stream only got powerful when I pushed down and it opened up. I fell over and was completely exhausted.

Members of Bellavia's platoon came to his aid immediately afterwards, and not a moment too soon: as he put it on Monday, the struggle pushed him to his “breaking point.”

“Honestly, if I had an MRE spoon, I would have used it — it was just there,” Bellavia
recalled. “My breaking point was the last guy. If my guys didn't come in at that moment, I did not have enough reserve … I was just done.”