Some people are freaking out over what is basically going to be four tanks and a couple of armored personnel carriers rolling around in Washington for Independence Day. 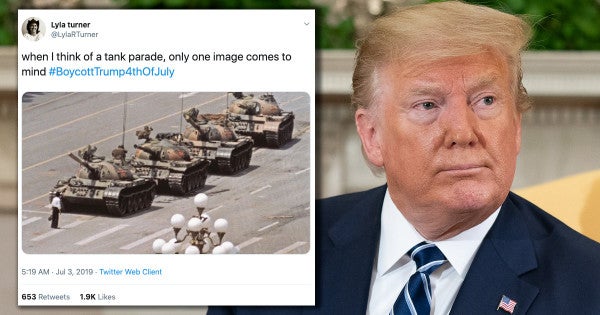 Some people are freaking the fuck out over what is basically going to be four tanks and a couple of armored personnel carriers rolling around in Washington for Independence Day.

Sure, bringing in tanks to celebrate the 4th of July could be criticized as misguided given it's not explicitly a military holiday, or perhaps, it could be said that it's a waste of taxpayer money.

But to observe some of the reaction to Trump wanting some armor around to look at, you would think he had just ordered the burning of Congress and the imposition of martial law.

And for those of you in the Washington, D.C. area, be sure to evacuate the city before the tanks trigger the end of the world.

The resemblance to days before Tiananmen Square is chilling. https://t.co/cFJJZzL4F7

He's not the only one.

when I think of a tank parade, only one image comes to mind #BoycottTrump4thOfJuly pic.twitter.com/wrSWm5EfwV

This is a photo from North Korea, with way more tanks than you'll ever see rolling through D.C.

And, actually, it is who America is.

This is a photograph of President Eisenhower’s inaugural parade in 1953. #Tanks #Parade pic.twitter.com/2i7gtdA6cy

This is profoundly disturbing. https://t.co/vIw5fWRNVG

Meanwhile, MSNBC's Joy Reid opined that Trump's use of tanks sends a threatening message to the “resistance.”

Yes, he definitely went there.

Trump is directing tax $$$ & the power of our military to have a tank filled Trump rally…but has NOT directed anyone to secure our election systems. It’s unAmerican.
#BoycottTrump4thOfJuly pic.twitter.com/MvBQiJlwt5