"Here's to any complaints about tanks and a [middle finger] to anyone who says anything about PTSD! Happy 4th. Blow your fingers off, get black out drunk, engage in risky behavior that offends snow flakes. If you die, then you didn't deserve to live! If you wine, hurry and become a '22' statistic today!" 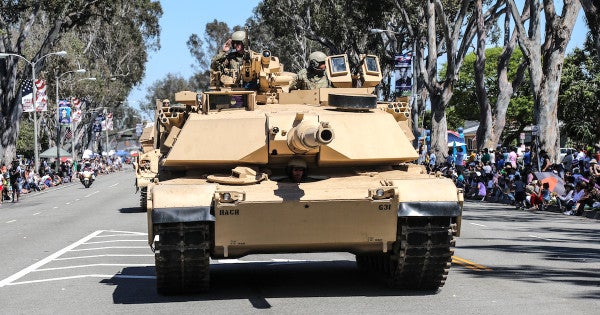 A Marine who posted on Facebook that people who objected to tanks being part of July 4th festivities in the nation's capital should kill themselves has been disciplined administratively, a Corps spokesman said.

In July, Chief Warrant Officer 2 Kevin Ennett responded to a message from the Marine Corps' official Facebook account wishing Marines a happy Independence Day with the following tirade: “Here's to any complaints about tanks and a to anyone who says anything about PTSD! Happy 4th. Blow your fingers off, get black out drunk, engage in risky behavior that offends snow flakes. If you die, then you didn't deserve to live! If you wine, hurry and become a '22' statistic today!”

Ennett subsequently deleted his post, but a screenshot of his comments were widely shared on Twitter. His command launched after an investigation into his social media post after being alerted by The Military Sexual Trauma Movement, a non-for-profit group that allows service members to report sexist and other disparaging behavior by troops online.

“Following the conduct of the investigation into a social media post made by Chief Warrant Officer 2 Kevin Ennett last month, the Marine Corps has determined to follow the investigation's recommendation to administratively discipline Ennett,” Capt. Christopher Harrison told Task & Purpose “As these actions were administrative in nature, they are not releasable.”

Ennett remains in the Marine Corps at the same rank, Harrison confirmed. At the time of his Facebook rant, he was assigned to Joint Special Operations Command.

Shortly after his Facebook comments generated a backlash of criticism, Ennett posted an apology on social media – which he also later deleted – calling his online remarks a “poor attempt at satire.”

“I work hard to be where I'm at,” Ennett wrote. “As I saw the nasty responses, on a day [I] was supposed to be spending with my family, I think about how ashamed of me they would be of my comments. And then I thought about how quickly everything I worked for could evaporate. If I would've known that people who have perceived my post that way, I wouldn't have put it up.”