This is the Space Force’s first offensive weapon 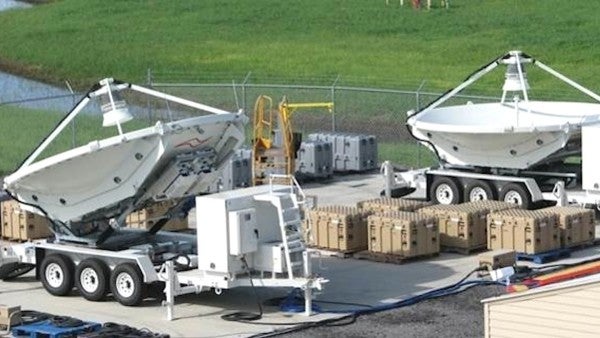 The U.S. Space Force is only a few months old, but the nascent service can finally count a brand new piece of weaponry among its growing capabilities.

Developed in collaboration with L3Harris in 2004 a mobile satellite communications system, the CCS has seen incremental upgrades in recent years to add fresh capabilities, according to the service, with this particular specific upgrade including new software capabilities “to counter new adversary targets and threats.”

According to the Washington Examiner, the Air Force had seven CCS systems currently deployed as of November 2019.

“CCS is the only offensive system in the United States Space Force arsenal,” Space and Missile Systems Center Special Programs directorate materiel leader Lt. Col. Steve Brogan said in a January press release on the effort. “Achieving IOC for this upgrade puts the ‘force’ in Space Force and is critical to Space as a warfighting domain.”

The SMC Special Programs directorate on March 12 held a ceremony handing control of the new system over to the 4th Space Control Squadron, according to an Air Force press release.

“CCS B10.2 represents the end of the traditional way of development,” SMC Special Programs director Col. Stephen Purdy said in statement. “Future upgrades and enhancements will make use of SMC’s Agile DevSecOps (Development, Security and Operations) approach adapting to the evolving battlefield while delivering capabilities to the warfighter faster and better than our opponents.”

The CCS won't be the only weapon in the Space Force's arsenal for long: As The War Zone notes, Space Force Vice Commander Lieutenant General David Thompson recently told lawmakers in a March 4 hearing that the service was currently working on fresh capabilities “to protect and defend” the U.S. military's space-based assets.

“We began prototyping, and demonstrating, and preparing for what I’ll call abilities to protect and defend our assets, and we did that extensively in the budget in [the 2020 Fiscal Year],” Thompson said. “In [the 2021 Fiscal Year], we are now taking steps to extend that across the fleet, as well as look at other capabilities to be able to continue to defend those assets that we have and defend adversary use of space.”

Sure, the Space Force's new weapons systems may not be a flashy or imaginative as a laser beam on the moon, but the message from military officials is clear: when it comes to supporting U.S. troops downrange, the service s finally ready for a fight.