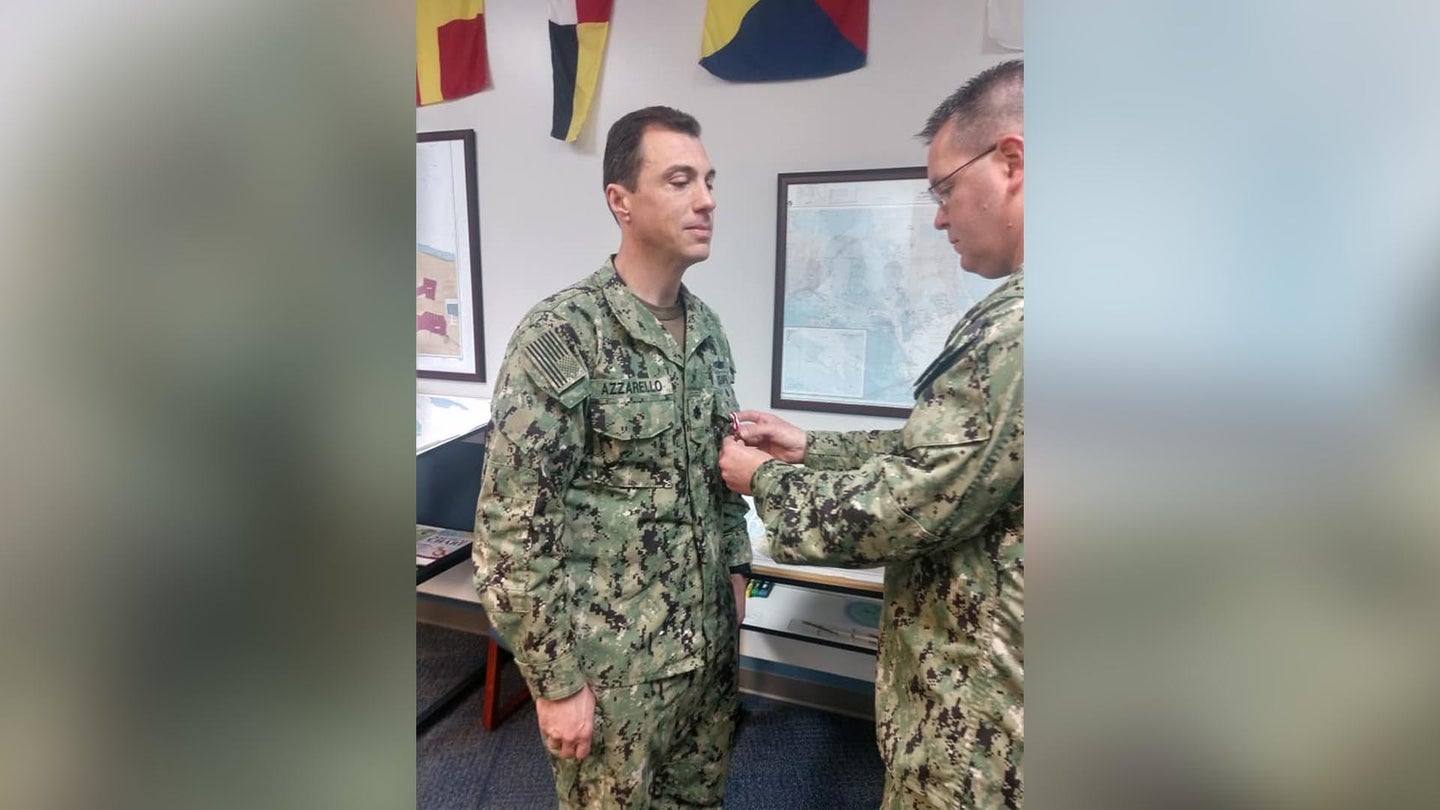 “One second he may be asking about your family, and the next time he will be telling you that he hates the sound of your voice, that you’re f–king retarded, or threatening an LOI [letter of instruction] for calling him too many times for mandatory reports while he’s getting a haircut,” one crew member said in the investigation. “The more stress he was under and less sleep he got the worse it was.”

Rear Adm. Ryan Scholl, commander of Carrier Strike Group 8, wrote in his endorsement of the investigation that Azzarello would face “disciplinary action at my level.”  On April 14, Azzarello went before an admiral’s mast, said 2nd Fleet spokeswoman Cmdr. Ashley Hockycko, who was unable to release the mast’s findings because it is an administrative matter.

“Cmdr. Azzarello is still in the Navy and has been temporarily reassigned to the staff of Naval Surface Force Atlantic,” Hockycko said. “His performance as commanding officer will be considered along with his entire record of service when making decisions on any future assignments.”

When Azzarello was relieved as the Forrest Sherman’s skipper in January, his attorney Timothy Parlatore told Task & Purpose it was because his client had not followed Defense Department procedures when he tried to turn a captured AK-47 into a plaque for the ship.

Parlatore maintained on Thursday that it was the issues stemming from the captured AK-47 for which Azzarello ultimately received a letter of reprimand, not the “false allegations” made in the command investigation. Parlatore also said that Azzarello was tough on his junior officers because they were “inadequately trained before the ship’s deployment.

“You had the McCain and the Fitzgerald [collisions] immediately in the rearview mirror,” Parlatore said. “And he’s looking at this crew of totally unqualified junior officers and in every single one of their faces he sees the next collision because they did not have the proper watchstanding standards.”

‘I thought he was going to punch me’

The command investigation into Azzarello was prompted by two complaints to the Naval Inspector General’s anonymous hotline in July and November 2020.

The investigating officer did not address any issues stemming from whether an AK-47 was recovered from a boat that the Forrest Sherman interdicted in November 2019 and given to Azzarello. That matter was assigned to the Naval Criminal Investigative Service.

Ultimately, the command investigation found that Azzarello would refer to his junior officers as “f–king retarded,” “useless” and “stupid.”

The ship’s chief engineer told the investigator that Azzarello once told him, “Get your hands out of your pockets when you speak to me, you son of a bitch,” and then brought him into his cabin to yell at the officer some more.

Azzarello acknowledged that he had called the chief engineer a “son of a bitch” but he could not remember what made him so angry at the time. He was also unable to recall instances when he allegedly called junior officers “retards.”

“But [Azzarello] did note that he regularly calls his sons ‘retards’ and that it was possible he used that word in a joking, playful manner, not intended to be abusive,” the investigation found.

For Parlatore, who attended Surface Warfare Officers School with Azzarello when both men were ensigns, the fact that Azzarello allegedly used obscenities with his crew is hardly noteworthy.

“The stuff that they said that he said to his junior officers is a fraction of what was to us when we were junior officers,” Parlatore said. “Oh my God: Sailors swear. Holy shit. You mean in a stressful situation the Navy commanding officer might use a bad word? Heaven forbid.”

But on one occasion, Azzarello came close to crossing the line from verbal to physical abuse, the investigation found. One comment on the Forrest Sherman’s most recent Defense Organizational Climate Survey noted that Azzarello had allegedly “raised his hand as to strike the individual but did not follow through.”

It apparently happened when the ship’s morale, welfare, and recreation officer told him that there was not enough beer aboard for the entire crew because the policy had recently been changed to allow sailors who are at least 18 years old to drink on beer day.

That’s not true, claimed Parlatore, who described the alleged incident as “fabricated.”

However, the investigating officer determined that Azzarello had assaulted a division officer in the spring of 2018, when Azzarello was serving as the executive officer for the cruiser USS Vella Gulf.

The Vella Gulf’s ordnance officer alleged that Azzarello “repeatedly poked him with his fingers in the collarbone area” while dressing him down, according to the investigation.

“I don’t recall there being any blood or bruising, but the area was definitely sore and tender,” the officer recalled as part of the command investigation.

No action was taken against Azzarello for the incident.

“I believe that poor anger management skills contributed to this outburst and may have contributed to the separate perceived physical threat alleged in the DEOCS and described by three officers,” the investigating officer wrote.

Because the two-year statute of limitations on administering non-judicial punishment for the alleged assault had already expired, the investigating officer recommended that Azzarello attend anger management training.

Parlatore disputes the investigation’s conclusions about the incident aboard the Vella Gulf. He called the allegation that Azzarello had assaulted the ordnance officer “totally false” and added that Azzarello has “no memory of that whatsoever.”

“As far as I know, it did not happen,” Parlatore said.

‘Once he found that limit, he would walk that line’

Several officers who served under Azzarello described him as a difficult commanding officer who would scream at his subordinates when he was displeased with them. In fact, two people interviewed for the investigation compared Azzarello to retired Navy Capt. Holly Graf, who was fired as the cruiser USS Cowpens’ commanding officer in 2010. Time magazine referred to her as a “female Captain Bligh,” referring to the notorious captain of the HMS Bounty during the ship’s mutiny.

One officer aboard the Forrest Sherman described Azzarello as “very knowledgeable.”  But the officer also wrote about learning a lot “through the gauntlet which I endured,” including being called “useless” and “stupid.”

“At times though he seemed to just want to break people down and see how far he could push people before they would break,” the officer said. “Once he found that limit, he would walk that line.”

“There were times where I felt sick walking to the bridge just because of my nerves on what I would be yelled at for today,” the officer continued. “His actions are rough but it can help shape you. Sometimes it would destroy people though. I’ve seen several JOs [junior officers] break down and almost give up. Some people get it worse than others on the ship or just because of his mood that day.”

When asked about statements like these, Parlatore said that the officers on the Forrest Sherman wouldn’t have had any issues standing watch on the bridge if they had been qualified in the first place.

“Really, what they were afraid of was that he was going to notice his poor performance and point it out to them,” Parlatore said.

Still, it wasn’t just performance issues that would upset Azzarello. An officer recalled that he made the mistake of saying “Roger that sir” to Azzarello. For the next two to three months, whenever Azzarello saw this officer, he would scream “Roger that Mr. Seymour,” even if he was giving a briefing to a room full of people, the officer told the investigator.

This officer also claimed that whenever Azzarello issued subordinates a letter of instruction, which detailed performance lapses and how they needed to improve, Azzarello would explain he was creating a “paper trail” to justify kicking them off the ship.

During his tenure aboard the Forrest Sherman, Azzarello issued at least 46 letters of instruction to officers, including six department heads and 16 division officers, the investigation found.

“CDR Azzarello excessively utilized LOIs and overemphasized the possibility of removing officers from his ship during issuance and on other instances. Additionally, LOIs were sometimes issued in rapid succession to individual officers, which limited the opportunity for the particular officer’s growth and improvement prior to additional administrative action,” according to the investigation.

Rather than driving his subordinates to reach higher standards, Azzarello’s use of letters of instruction “created an unnecessary level of mistrust and fear” among his officers and contributed to creating a hostile work environment, the investigation found.

But Parlatore said investigators were not able to identify a single letter of instruction issued by Azzarello that was either inappropriate or factually incorrect.

“The concept that he issued excessive LOIs is a statement that when junior officers screw up, we don’t want you to document it, which is the wrong message to be sending to commanding officers,” Parlatore said.

“Yes: He drove them hard,” Parlatore continued. “Yes: He occasionally used language that these poor, little junior officers felt badly for. But every single officer that he refused to give their qualifications to, it was because they were not qualified.”

For some officers; however, Azzarello’s harsh style was almost too much. One officer who wrote about having thoughts of suicide during the Forrest Sherman’s deployment claimed that two other officers also had suicidal ideations because of Azzarello’s treatment of them, according to the investigation.

“I have personally talked to several other first tour division officers aboard who have told me they have contemplated suicide and have stated this is because of the worthlessness they feel and harassment by CDR Azzarello,” another officer said.

The investigation found that two department heads were placed on limited duty for mental health issued and “suicide related behavior.”

But Parlatore accused officers aboard the Forrest Sherman of “making up stories” that they were contemplating suicide in an attempt to hurt Azzarello.

“They know what the hot-button topic is,” Parlatore said. “They know how to get people’s attention on stuff. But ultimately, their underlying claims: totally unfounded. And if you really have suicidal ideations just because your commanding officer uses bad words, then clearly he is correct – that you’re not cut out to be driving a ship.”

Parlatore also claimed that junior officers nowadays believe that “preparing for war should be a stress-free environment.”

In fact, all of the toughness that Azzarello showed to his officers was intended to keep them alive, Parlatore said.

“His priority was ensuring that unlike the COs of the Fitzgerald and the McCain, he did not want to write a single letter to any family saying: ‘I regret to inform you that your son or daughter has been killed,’” Parlatore said. “That was his focus. And they executed that deployment in stellar fashion.”

Read the full investigation below: