Oh my God, the Marines have a laser now

Brace yourselves: Marine grunts now have their hands on a drone-killing laser cannon 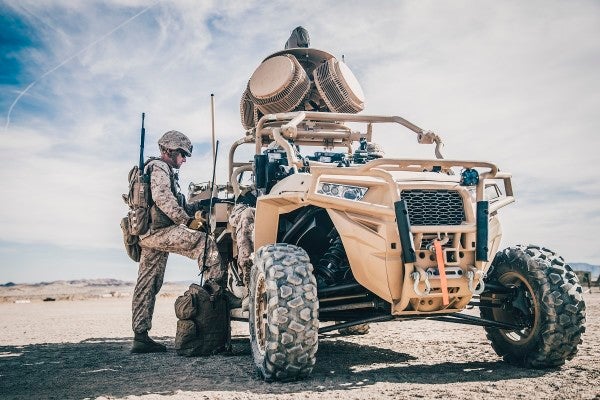 Brace yourselves: Marine grunts now have their hands on a drone-killing laser cannon.

Marines are currently evaluating a Compact Laser Weapons System (CLaWS) as “the first ground-based laser approved by the Department of Defense for use by warfighters on the ground,” Marine Corps Systems Command announced on Wednesday.

Unlike the Army's vehicle-mounted directed energy system, the CLaWS is “not intended to be a standalone system,” according to MARCORSYSCOM, but the prototype will “serve as a component to an overall system” designed for counter-drone operations downrange.

“This was all in response to a need for counter unmanned aerial systems to take down drones,” Ground Based Air Defense (GBAD) program manager Don Kelley said in the MARCORSYSCOM release. “We're providing CLaWS to Marines as a rapid prototype for evaluation … Depending on the results, CLaWS could become part of a larger capability set.”

While it's unclear when, exactly, Marines might see a CLaWS-inspired system in their arsenal, but MARCOSYSCOM says that the GBAD program was a testament to the effectiveness of the Pentagon's Defense Ordnance Technology Consortium in rapid technology development and prototyping.

“The typical acquisition timeline can be lengthy,” GBAD product manager Lt. Col. Ho Lee said in a release. “But this project, from start to finish—from when we awarded the DOTC contract, to getting all the integration complete, all the testing complete, getting the Marines trained, and getting the systems ready to deploy—took about one year.”

The news of the CLaWs prototype comes as the Army says it plans on fielding combat vehicle-mounted lasers and hypersonic missiles within the next four years to counter potential Russian or Chinese drones downrange.

Since March 2018, artillery soldiers with the 2nd Cavalry Regiment have been training with specially-modified Stryker Infantry Carrier Vehicles outfitted with a Mobile Experimental High Energy Laser system at the Grafenwoehr Training Area in Germany.