‘Game of Thrones’ has an air power problem

Following the epic siege of Winterfell, the Game of Thrones episode "The Last of the Starks" confronts its protagonist Daenerys Targaryen with wrenching military dilemmas that might have been ripped from today's headlines—and issues on the ethical issue of force that remain highly controversial today 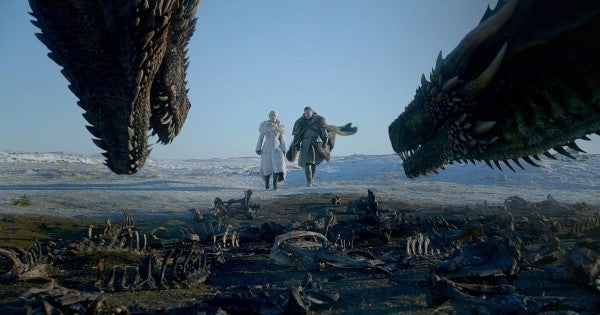 Following the epic siege of Winterfell, the Game of Thrones episode “The Last of the Starks” confronts its protagonist Daenerys Targaryen with wrenching military dilemmas that might have been ripped from today's headlines—and issues on the ethical issue of force that remain highly controversial today.

While her ally Jon Snow advances troops south by land, Daenarys moves her Unsullied infantry by sea to rebase her forces at Dragonstone, a fortress which offers a convenient staging ground for her ultimate goal: the capture of the capital of King's Landing, held by the villainous Cersei Lannister. Daenerys flies over her fleet with her two dragons, confident in her supremacy as Cersei has no air force, and her infantry and cavalry lack effective anti-dragon weapons.

Cersei's advisor Qyburn, however, has developed and mass-produced huge crossbows called 'scorpions'—ballistas which have the range and penetrating power to harm Daenerys's dragons. In the real world, ballistae were first developed by the Greeks and Romans as a form of naval and siege artillery (they played a role in Caesar's conquest of modern day France and Great Britain) and had an effective range of a few hundred meters.

Cersei's pirate-ally Euron Greyjoy deploys his ballista-equipped fleet to ambush Daenerys' forces, and knocks the dragon Rhaegal out of the sky with a surface-to-air barrage. Daenerys attempts an attack run on Eurons' fleet, but is forced to disengage in the face of heavy incoming fire.

Though the danger posed by the ballistae to Daenarys' dive-bombing attack is credible, the long-range volley which kill the dragon Rhaegal at high altitude is less so.

Though Euron uses an island to conceal his ships from Daenarys' fleet in an enfilade firing position, Daenerys should have had a huge spotting and scouting advantage simply because she can fly far overhead. Furthermore, as Euron's non-magical weapons are constrained by laws of physics, they should have a relatively short effective range, as they lose penetrating power over longs distances and lack guidance systems, a high rate of fire, and a blast effect. Usually one or two of these qualities are found in real-world anti-aircraft weapons.

However, Daenerys' fiasco makes more sense when considering how militaries often suffer their heaviest losses when surprised by relatively new technologies and tactics or which they haven't developed countermeasures. For example, during the initial phase of the Yom Kippur War, counter-attacking Israeli jets and tanks suffered heavy losses charging towards massed Egyptian missile weapons, until they adapted tactics to counter their threat.

Euron's dragon-busting firepower more convincingly resembles that achieved by modern air defense missiles, such as the Aegis air defense systems on modern U.S. Navy destroyers and cruisers. These use a half-dozen different weapons designed to engage different types of aerial targets at varied ranges—from automated rapid-firing Phalanx cannons designed to gun down sea-skimming missiles seconds before impact, to SM-3 Block II missiles that can fly hundreds of miles and swat down ballistic missiles plunging down from space. Each ship carries over a hundred missiles, and can network its SPY-1D radars, which can detect aircraft over 200 miles away, with other Aegis ships.

The aerial fiasco also demonstrated Daenerys' weaknesses as foreign invading power. Had she possessed basic intelligence-gathering assets in King's Landing, she could have been alerted to the deployment of the rather conspicuous ballistae and planned countermeasures in advance.

Daenerys is unlikely to field dragons with cruise missiles and jammers, but a logical alternative is siege artillery such as catapults that can be used to methodically knock out the ballistae beyond their effective range.

Another tactic is to infiltrate special forces operatives behind enemy lines to disable or disrupt air defense artillery. For example, later in the Yom Kippur War, Israel used disguised troops in captured amphibious armored vehicles to cross the Suez Canal and knock out Egypt's formidable long-range air-defense missiles and radars.

How many civilian casualties are “acceptable?”

Another of Cersei's ploys is to invite refugees into the keep of King's Landing, posing a dilemma: if Daenerys sets fire to the keep with her dragon, she will kill thousands of innocents, turning the populace against her.

Sadly, Cersei's reasoning has real-world parallels. Aerial bombardment campaigns in populated areas—even those using hi-tech precision weapons—inevitably cause civilian casualties. Urban insurgents are particularly incentivized to make use of civilian residences not only for cover and concealment, but in some cases to impose a political cost on enemy bombardments.

During the Battle of Mosul in 2016-2017, ISIS even heinously prevented civilians from leaving combat zones in the city so as to confound targeting of air strikes, and raise the political price of those that were authorized.

Daenarys' advisors Tyrion and Varys both are horrified by the prospect of such carnage. Sadly, they express more moral qualms about the cost to innocent than many real-life leaders.

Of course, aggressive regimes like Nazi Germany and Imperial Japan deliberately targeted civilians in European and Asian cities to demoralize civilian populations. So also did the United Kingdom, blasting Iraqi villagers with biplanes in the 1920s, and setting German cities ablaze with hundreds of heavy bombers during World War II.

Today, the Syrian and Saudi air forces are infamous for attacks on civilian targets. But even air forces seeking to minimize loss of civilian lives can still kill hundreds or thousands.

Modern precision-guided weapons offer a means to try to limit collateral damage. Whereas Air Force of yore would deploy dozens of bombers to carpet large areas with hundreds of thousand-pound bombs in the hopes that some would land near a target—often killing civilians and friendly troops in the process—a single modern jets may more reliably service the same target using a single 285-pound GPS or laser-guided Small Diameter Bomb.

But precision weapons only mitigate the civilian death toll. For example, Amnesty International reported that over 1,600 civilian killed by airstrikes targeting the former ISIS capital of Raqqa.

A tempting target seen from above such as a column of motor vehicles or company of infantry moving across an open field, may, in fact, turn out to be refugees fleeing the fighting or local villagers assembling for a wedding. U.S. airstrikes have mistakenly hit such targets on multiple occasions in Serbia, Afghanistan, Iraq and Syria.

Means to minimize such errors—such as relying on ground-based spotters, and employing stricter rules of engagement for authorizing strikes, often mean assuming higher risk of personal harm to troops on the ground.

Whether Daenerys can temper her use of military force to protect the populace of the kingdom she claims a right to rule has emerged as one of the central moral tests, and potentially, moral tragedies, of the long-running series. That same ethical dilemma haunts many military campaigns today.

SEE ALSO: Each Military Branch As A House On 'Game Of Thrones'