"This was not a decision made lightly, but I believe it was the right decision.” 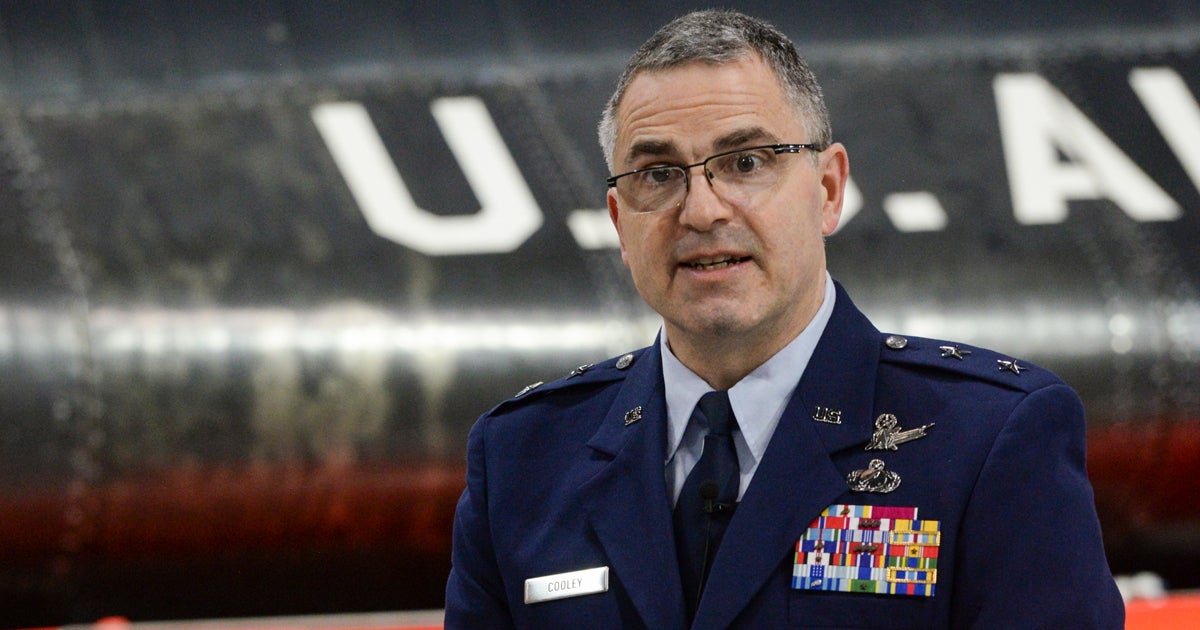 The Air Force announced on Wednesday that it will court-martial Maj. Gen. William T. Cooley, marking the first time in the branch’s history that one of its generals will face such a proceeding. The former head of the Air Force Research Laboratory, Cooley has been charged with three counts of sexual assault under the Uniform Code of Military Justice.

Cooley allegedly made unwanted sexual advances by kissing and touching a female civilian during an off-duty incident on August 12, 2018, while he was still chief of the Air Force Research Laboratory. The general is accused of kissing the woman on her mouth with his lips and tongue “to gratify his sexual desire” without her consent, Military.com reported.

“She knows what happened and what the evidence will show,” Ryan Guilds, the attorney representing Cooley’s alleged victim, told Air Force Times. “She is confident that when her voice is heard the truth will justify the Air Force’s charges and demonstrate her bravery in coming forward.”

The general is not the first in the Air Force to face allegations of sexual misconduct. Others include Maj. Gen. Thomas Fiscus, who the Air Force Inspector General found in 2004 had made inappropriate sexual advances on 13 women; and Brig. Gen. Richard Hassan, who the IG found in 2005 had sexually harassed female subordinates and created a hostile work environment. However, those generals were sheltered from facing court-martial by their peers at the top of Air Force command, experts said.

General officers “don’t want to prosecute each other because it’s this old boy chummy network,” retired Air Force Lt. Col. Rachel VanLandingham, a former judge advocate who now teaches law at Southwestern Law School, told Task & Purpose in November. “Many of them have integrity, but that track record doesn’t speak well on their behalf. It speaks of the euphemism ‘different spanks for different ranks.’”

However, with the renewed focus on sexual assault in the wake of the #MeToo movement, top Air Force leaders appear to be taking such accusations more seriously, even among the higher ranks.

“The people involved in the process have been told that they need to take [sexual assault] seriously,” retired Lt. Col. Joshua Kastenberg, a former Air Force JAG and judge who teaches law at the University of New Mexico, previously told Task & Purpose. “You apply the same measures of evidence that you would for a brand new airman accused of this as you do with a general, and because of that seriousness it is less likely to be buried.”

Cooley was relieved of command of the Air Force Research Laboratory on Jan. 15, 2020 and assigned to work as a special assistant under Gen. Arnold W. Bunch, Jr., chief of Air Force Material Command. Lt. Gen. Gene Kirkland, commander of the Air Force Sustainment Center at Tinker Air Force Base, Oklahoma, was appointed as the authority to review the evidence against Cooley, and he brought one charge against him in November. The case then proceeded to an Article 32 preliminary hearing, similar to a civilian preliminary hearing, in February. The hearing provided a recommendation to Bunch to refer the charges to a general court-martial.

“After a comprehensive review of all of the evidence from the investigation and the Article 32 preliminary hearing, I’ve informed Maj. Gen. Cooley of my decision to move his case to general court-martial,” Bunch said Wednesday. “I can assure you this was not a decision made lightly, but I believe it was the right decision.”

Air Force officials did not specify a date for the court-martial, but they emphasized that Cooley is presumed innocent until proven otherwise “by competent legal authority.” However, experts told Task & Purpose in November that problems with the Air Force judge advocate general system may not be creating the highest quality military justice professionals who would be needed in a high-profile case like this.

While the JAG officers who serve as Air Force lawyers are highly motivated and dedicated, experts said, they are hampered by a promotion system which favors general experience across the breadth of Air Force legal areas, rather than deep experience in any one particular area such as military justice.

“Throughout my career I was told over and over ‘you’ve been in military justice too long, you’re going to hurt your career, you need to get out,’” retired Col. Don Christensen, a former chief prosecutor of the Air Force who was one of the few military justice specialists to rise to the rank of the colonel, told Task & Purpose in November.

Other areas of Air Force law include air and space law, claims and tort litigation, environmental law, and government contracts. But in the military justice arena, which deals with criminal cases, it’s especially important to have experienced prosecutors.

“You can have these really heinous murder cases and the senior prosecutor would be a four-year captain,” said Christensen. “A lot of times they’re going against a civilian defense counsel who’s been doing it 20, 30 years. So the Air Force loses a lot of cases.”

“In the military justice arena you end up cutting off your nose to spite your face,” said VanLandingham. “Because that means you’ve got a judge advocate who maybe had one assignment in criminal justice.”

Whether these issues play out at Cooley’s court-martial is still unclear. Officials say the Air Force trial judiciary will identify a senior military judge and coordinate timing and venue for the court-martial proceeding. Jurors, or court members, must either be officers of higher rank, or equivalent grade but with an earlier date of rank to the accused. That last requirement is also a challenge when few members of the Air Force out-rank a two-star general like Cooley.

Still, the fact that Cooley is facing a court-martial could be a promising sign that the branch is taking sexual assault cases more seriously overall.

“It took almost 74 years for the Air Force to send its first general officer to a court-martial, but I’m glad this survivor now has a chance for justice,” Christensen said on Wednesday.