The Military Justice System Has A Race Problem, According To DoD Data

Black U.S. military personnel are much likelier to face disciplinary action under the Uniform Code of Military Justice than their... 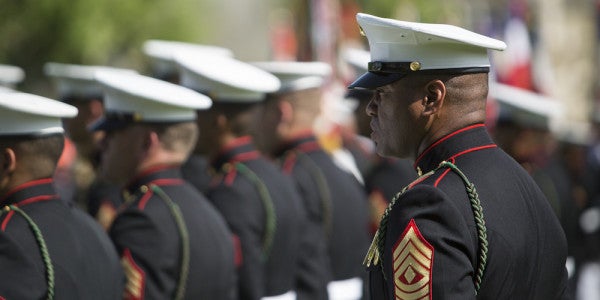 Black U.S. military personnel are much likelier to face disciplinary action under the Uniform Code of Military Justice than their white brothers-in-arms, according to a new report.

An analysis of Department of Defense demographic data spanning a decade from 2005 to 2015 — obtained through a Freedom of Information Act request by the nonprofit advocacy organization Protect Our Defenders — revealed that black troops were as much as two-and-a-half times more likely to face court-martial or nonjudicial punishment than white service members across the Pentagon’s four main service branches.

Just over 70% of active-duty and reserve service members are white, according to a 2015 breakdown of DoD demographics, while just 17% are black.

While different data sets provided by each branch paint different pictures of racial gaps, the report suggests that the Air Force is the worst offender, with black airmen 71% likelier than whites to face NJP or court-martial proceedings.

“The Air Force works hard to prevent unlawful discrimination in all of our processes, particularly military justice, and will continue to do so,” Air Force spokesman Col. Patrick Ryder told USA Today in a statement.

The Air Force is followed by the Army and Navy, which reported disparities of 61% and 40%, respectively, between the share of black troops and white troops brought to a special or general court-martial. And in the Marine Corps, not only are black Marines 32% more likely to receive a guilty ruling during NJP or a court-martial, but the gap between black and white treatment became “more significant the more serious the disciplinary action was,” according to Protect Our Defenders.

“It is longstanding Department of Defense policy that service members must be afforded the opportunity to serve in an environment free from unlawful racial discrimination,” Pentagon spokesman Johnny Michael told Task & Purpose in a statement. “The Department will review any new information concerning the implementation of and compliance with this policy once given the opportunity to review the report.”

That these disparities exist is unsurprising. According to state and federal data, blacks are not just significantly more likely to face arrest and prosecution in the U.S. in general, but to end up in prison while awaiting trial or receive plea deals that result in incarceration. Indeed, sentences imposed on black offenders by the federal government are 20% longer than whites convicted of the same offenses, according to the ACLU; in many states, blacks disproportionately serve life sentences for nonviolent offenses.

But while activists have shone a spotlight on problems in the civilian court system, disparities between black service members and their white counterparts have widened over the last decade. According to the Protect Our Defenders report, black troops in the Air Force and Marines, in particular, are increasingly likely to face nonjudicial punishment or court-martial, and to receive a guilty verdict — an increase that the organization attributes to complacency on the part of the Pentagon.

“Protect Our Defenders calls on Congress to investigate these new findings and provide recommendations for fixing this problem that affects every branch of the Armed Forces,” said retired Air Force chief prosecutor and Protect Our Defenders president Col. Don Christensen. “Military leadership has been aware of the significant racial disparity in its justice process for years, and has made no apparent effort to find the cause of the disparity or remedy it.”

Christensen suggested that the racial disparities are a result of the “commander-controlled justice system” that gives officers, insulated from branch leaders by the specter of undue command influence, discretion in applying nonjudicial punishments to troops under their command (only 8% of military officers were black as of 2016, compared to 78% white, per USA Today).

When reached for comment, an Air Force official offered to provide a copy of Ryder’s full statement to USA Today. Public affairs officers from the Army, Navy and Marine Corps referred Task & Purpose to the Office of the Secretary of Defense.