Every day, things get worse at the Pentagon

The Defense Department is lurching from one civil-military crisis to the next and the Five-Sided Funhouse is the center of it all. 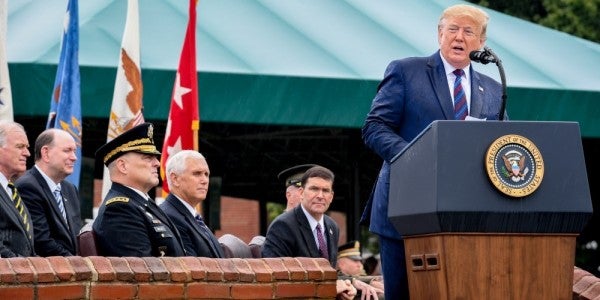 Beloved readers: Your friend and humble narrator is writing to you from inside the Pentagon for the first time in three months. Thankfully, this reporter is still able to fit into his work clothes again after a pandemic diet that consisted solely of comfort food. (If stress eating were an Olympic sport, yours truly would be Michael Phelps.)

Right now, the mostly deserted Pentagon looks like famously germ-phobic Howard Hughes were in charge of cleanliness. People in the building are required to wear masks, which generally come in three varieties: cloth, surgical, and hardware store aisle 7.

With everyone wearing masks, it can be a little difficult to recognize people – this reporter already suffers from a form of facial blindness and is constantly waving at people he doesn’t know. But even though this reporter hadn’t been in the building since March and was wearing a mask, the kind woman at Dunkin’ Donuts remembered exactly what your friend and humble narrator orders every day. She rang me up for a black coffee on Friday without any words passing between us.

All of the above said, the reason this reporter came back to the Pentagon was not because things are returning to normal. Rather, the Defense Department is lurching from one civil-military crisis to the next and the Five-Sided Funhouse is the center of it all.

In fact, the word this reporter has heard most often to describe the current climate in the Pentagon has been “crazy.” Defense Secretary Mark Esper reportedly came to the brink of resigning or being fired by President Donald Trump for publicly disagreeing with the president about using active-duty troops to put down riots in Washington, D.C.

And shortly after Army Secretary Ryan McCarthy indicated that he was open to renaming 10 bases that had been named for Confederate leaders years ago, Trump tweeted that he would never allow such a move.

Events are moving so rapidly that this reporter found himself combat ineffective when Milley told National Defense University graduates on Thursday that he should not have taken part in the president’s photo opportunity at St. John’s.

The crush of information was too much to deal with. (I felt a bit like Army Lt. Gen. Courtney Hodges, who was so overwhelmed during the Battle of the Bulge that his chief of staff unofficially took command of 1st Army.)

In the 15 years that it has been my honor to cover the military and service members, I have never seen the Pentagon so chaotic. Even Donald Rumsfeld’s tenure as defense secretary, when he and other government officials were passionately arguing that the Iraq war was going much better than the media was reporting, seem like the good old days by comparison.

What’s different now is President Trump is wildly unpredictable and has limitless energy. His constant stream of edicts in the form of tweets create new problems for the Defense Department to deal with – such as when he warned protesters: “When the looting starts, the shooting starts.”

Both uniformed and civilian leaders find themselves in an impossible position when Trump’s most trusted military advisers are Fox News personalities, such as Pete Hegseth.

Every day brings a new potential conflict between senior defense officials and the president. The showdown between Trump and former Navy Secretary Richard Spencer over whether Navy SEAL Eddie Gallagher should keep his trident was just the start of the new normal – which is never better than the old normal.

This reporter can tell you who is leading the Defense Department right now, but that could all change with one tweet by the president. It is not enough to say that we live in an era of strategic unpredictability. The Defense Department – and the entire U.S. government – has no strategy. They are improvising every day in response to Trump’s latest mood swing.

With more than six months left in Trump’s first term, there are no signs that tensions between the Pentagon and White House will ease. The question is how long civil-military relations can remain at the breaking point before the Pentagon becomes just another appendage of the Trump organization.