The Legendary AK-47 Just Received The Ridiculous Tribute It Deserves

Before his death in 2013, Mikhail Kalashnikov was a Russian lieutenant general and the military engineer behind the legendary AK-47.... 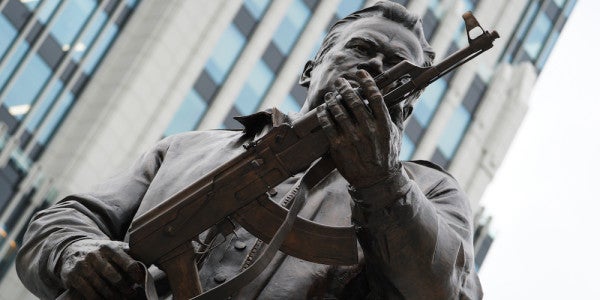 Before his death in 2013, Mikhail Kalashnikov was a Russian lieutenant general and the military engineer behind the legendary AK-47. But as of Sept. 19, Kalashnikov is now a 30-foot bronze statue, brandishing a shiny replica of his ubiquitous assault rifle over the streets of central Moscow.

The looming effigy is less a tribute to Kalashnikov than to the uniquely reliable killing machine he developed, according to a Guardiandispatch from the monument unveiling. Russian culture minister Vladimir Medinsky declared that the AK-47 “is Russia’s cultural brand”; Russian Orthodox Church Archpriest Vsevolod Chaplin declared it “a holy weapon,” a machine-made Excalibur fit for a Muscovite King Arthur. The statue’s simple platform captures the essence of Mikhail’s legacy: “I created a weapon for the defense of my fatherland.”

Not just his fatherland. The favored assault rifle of both standing armies and insurgents, from the Hungarian Revolution of 1956 to the wave of jihadi terror that has swept through Europe in recent years, the AK-47 alone ends an estimated 250,000 lives each year.

The AK’s close-quarters stopping power and freakish durability have made it a fixture not just of distant battlefields, but pop culture, the favored weapon of would-be terrorists and mercenaries. To those who cut their cultural teeth on that lost decade between the fall of the Berlin Wall and the September 11th attacks, the AK is synonymous with some feisty henchmen in need of a lead sandwich.