What the cult classic ‘Red Dawn’ teaches us about insurgent warfare 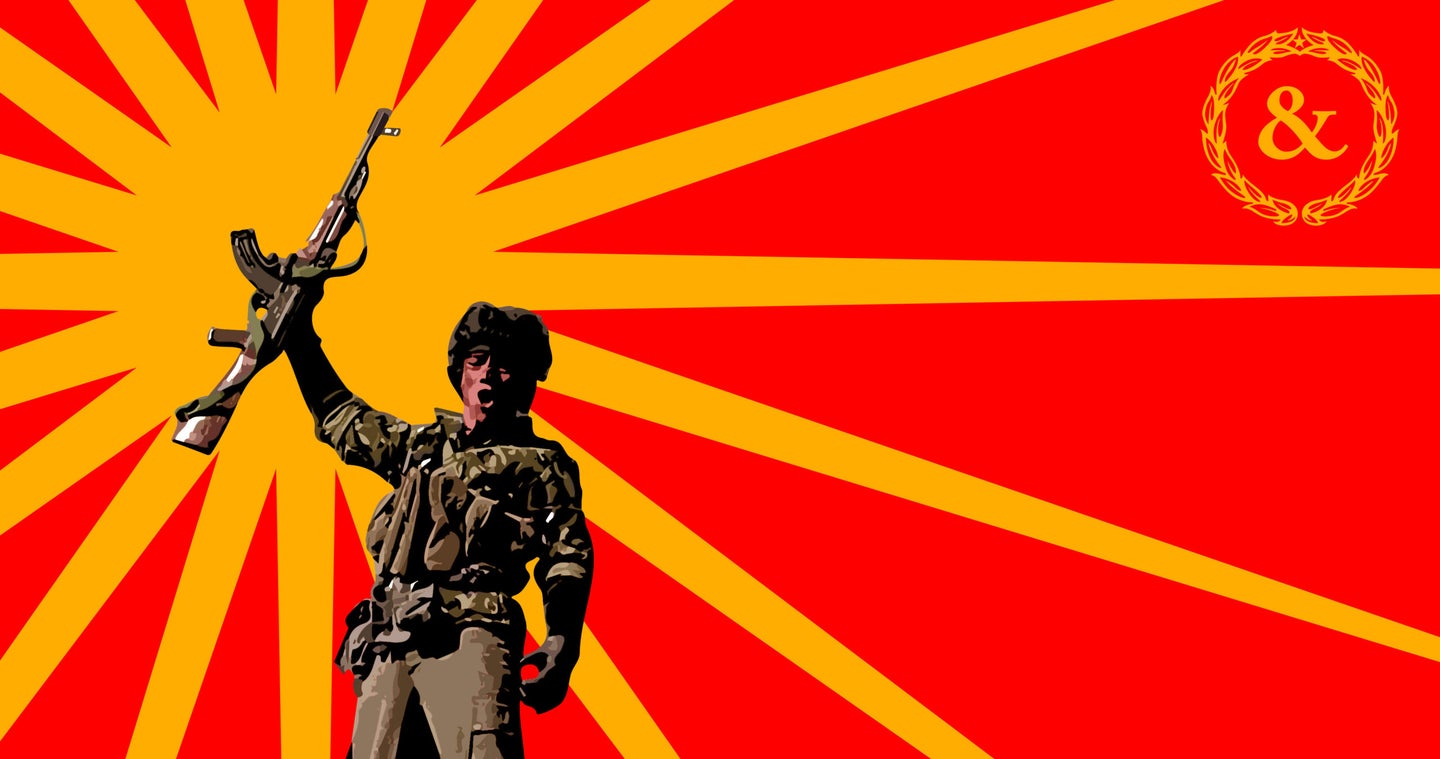 In addition to being a Cold War-era cult classic, 'Red Dawn' is also also a case study on how to inspire, and be defeated, by an insurgency. (Task & Purpose photo illustration by Aaron Provost).
SHARE

The 1984 film Red Dawn provides audiences with invaluable lessons about asymmetrical warfare. Set in a fictionalized version of Calumet, a small town in Colorado, the movie begins with the invasion of the United States by an alliance of communist countries and it follows a group of teenagers who become a resistance group named after their high school football team. In addition to being a perfect encapsulation of Cold War angst, the film is also a case study on how to inspire, and be defeated, by an insurgency.

Although the Soviets, Cubans, and Nicaraguans initially succeed in capturing the small town of Calumet, they quickly find themselves facing the Wolverines, a force of determined guerilla fighters that only grows stronger with every attempt to crush the local population’s support for the insurgency.

In Red Dawn, our heroes are drawn into battle after they are forced to kill three Soviet soldiers who discover their hiding place in the mountains. The communists respond by executing the main characters’ families and other American civilians, who are cut down in front of a crowd of onlookers including nuns before they can sing the refrain for “America the Beautiful.”

The movie then shows the teenagers’ metamorphosis from scared kids to battle-hardened rebels through a quintessential 80s montage. In little more than three minutes, the Wolverines achieve a series of brilliant victories that include luring a Soviet tank crew into a kill zone, where the enemy force is annihilated; preventing another reprisal against civilians by surgically taking out a Soviet firing squad without killing any American hostages; and executing a well-prepared ambush in which one Wolverine is perfectly positioned to drop hand grenades onto the enemy’s main force – all without any military training whatsoever.

While many of the communists’ tactics are clumsy and illegal under the Law of Armed Conflict, Red Dawn shows that any military that has trained to fight a conventional war can be caught flat-footed against an insurgency. The U.S. military had to rediscover its long-forgotten counterinsurgency skills to battle Al Qaeda in Iraq. Unfortunately, the lessons that helped degrade that insurgency did not prove to be a panacea for Afghanistan.

Retired Gen. David Petraeus, who led U.S. troops during the Iraq surge and later served as the top U.S. and NATO commander in Afghanistan, expressed one of the core concepts of counterinsurgency: Don’t make any more enemies than you already have.

“If we kill civilians or damage their property in the course of our operations, we will create more enemies than our operations eliminate,” Petraeus said in August 2010.

“We are engaged in a tough endeavor,” Petraeus continued. “It is often brutal, physically demanding and frustrating. All of us experience moments of anger, but we must not give in to dark impulses or tolerate unacceptable actions by others.”

In both Iraq and Afghanistan, the U.S. military tried to work with local forces to fight against insurgents. This campaign was more successful in Iraq’s Anbar province than in Afghanistan, where warlords whose loyalty to the Kabul government was always in question fled the country in August 2021.

“The Afghan people in large part saw the U.S. causing civilian casualties as being unacceptable,” Schroden told Task & Purpose. “The more it happened over time, the longer it happened, the less enamored of the U.S. presence in Afghanistan the Afghan people became.”

The Afghans also saw that despite all the money the United States was pouring into Afghanistan, most of their lives were not getting better, he said.

Meanwhile, the Taliban waged a successful insurgency campaign by effectively combined physical and information operations to apply pressure on Afghan civilians and the country’s security forces.

“They just had a far better feel for people at the grassroots level than the U.S. – or, arguably the government the U.S. supported – ever did,” Schroden said.

The Pentagon did not respond to a request from Task & Purpose to provide a comment for this story about how the U.S. military learned from painful experiences that people are the center of gravity in any counterinsurgency campaign.

One of the lessons from Red Dawn is that insurgencies can become a symbol, said Rep. Mike Waltz (R-Fla.), who is also an Army colonel and Special Forces officer.

“They need to be somewhat operationally effective, which they were – Patrick Swayze and Jennifer Grey, they were – but at the end of the day, they need to survive and become a bigger symbol for the resistance,” Waltz told Task & Purpose.

From a counterinsurgency standpoint, one of the communists’ greatest mistakes was failing to quash the Wolverines before they could inspire resistance to the invasion, Waltz said.

Fidel Castro, the former communist dictator of Cuba, provides an example of how a tiny insurgency can grow into a nationwide resistance movement. New York Times correspondent Herbert L. Matthews interviewed Castro in 1957. Castro later admitted that he only had about 18 fighters at the time, but he was able to persuade Matthews that his movement was “the flaming symbol of opposition to the regime” then led by Gen. Fulgencio Batista.

“From the looks of things, General Batista cannot possibly hope to suppress the Castro revolt,” Matthews wrote. “His only hope is that an Army column will come upon the young rebel leader and his staff and wipe them out. That is hardly likely to happen, if at all, before March 1, when the present suspension of constitutional guarantees is supposed to end.”

Castro also greatly exaggerated the size of his force, telling Matthews: “Batista has 3,000 men in the field against us. I will not tell you how many we have, for obvious reasons. He works in columns of 240; we in groups ten to forty, and we are winning. It is a battle against time and time is on our side.”

Matthews’ articles made Castro famous and contributed to the U.S. government’s decision in March 1958 to stop sending arms to Batista. Castro’s insurgency eventually grew larger and toppled the Batista government in January 1959.

As for Red Dawn, toward the middle of the film, a friend of Patrick Swayze’s character tells him that Americans in unoccupied parts of the United States have heard about the Wolverines’ exploits and there are rumors that the U.S. military will send Green Berets to help them.

Life, meanwhile, has a way of imitating art. Waltz was about 10 years old when Red Dawn first came out, and he remembers how the movie inspired him to devise a plan to fight the Russians with his bow and arrow if the invasion came.

“We already knew with all my buddies where we were going to start our Wolverine resistance movement,” Waltz said. “I think it probably planted a seed for my future Army career.”

Russia’s latest invasion of Ukraine also shows how powerful symbols of resistance can be, including the apocryphal tales about the “Ghost of Kyiv” fighter pilot and the heroic last stand of Ukrainians on Snake Island. Then in spring, pictures began emerging on social media showing damaged Russian military equipment tagged with the word “Wolverines,” just as in Red Dawn.

By not shutting down the internet in Ukraine, the Russians have allowed the symbology of the resistance to spread, Waltz said.

The lessons in Red Dawn about insurgent warfare also apply to Taiwan, where the U.S. government is helping to make the island reorganize their national guard and reserve forces to prepare for partisan warfare, Waltz added. Laying the groundwork for a Taiwanese insurgency is meant to deter a Chinese invasion.

Chinese leader Xi Jinping wants the conquest of Taiwan to be completed before the United States and its allies could intervene, Waltz said. That’s why the U.S. government needs to let China know that Taiwan has a strategy for defense in depth in which all Taiwanese citizens have both the will and arms to resist that will make any invasion of the island a long, hard slog and buy enough time for the United States and other countries to mobilize.

“We hope that will then be a deterrent measure that it’s too much of a porcupine to swallow,” Waltz said.

By the end of Red Dawn, most of the Wolverines have been killed, but their service to the United States is memorialized in a U.S. National Park Service monument. One of the enduring lessons of the film is a warning to any would-be invaders: No rallying cry is more powerful than “Avenge me!”