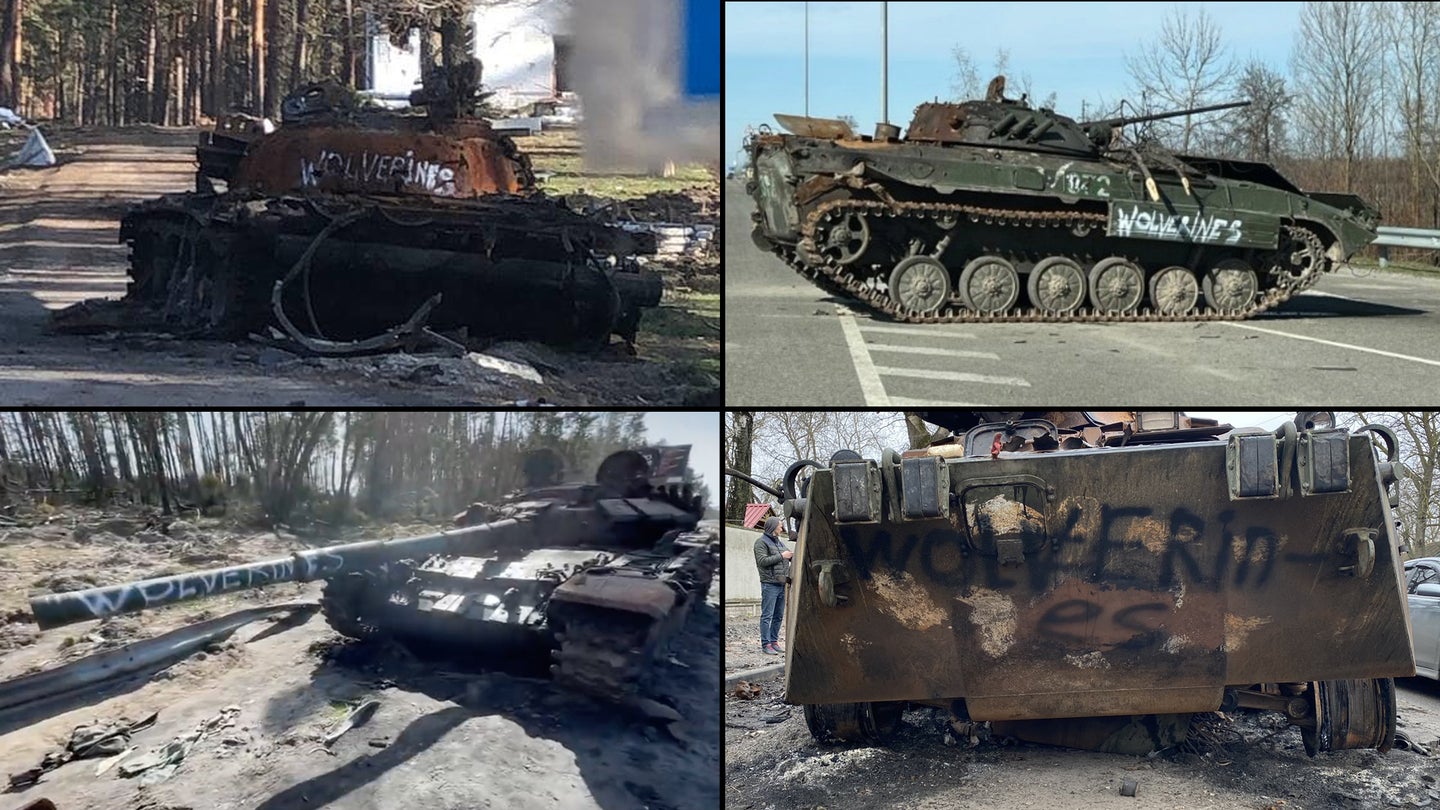 Photos and screenshots showing various Russian military vehicles that were tagged with "Wolverines" in Ukraine, in an apparent reference to the 1980s Cold War action movie "Red Dawn." (Screenshots via Twitter).
SHARE

The message seems to be spreading.

A photo posted to Twitter on Friday morning by journalist Nolan Peterson showed a burned-out Russian T-72 tank on a roadside supposedly near western Kyiv. Along the barrel, scrawled in white spray paint, was the word “Wolverines,” another seeming homage to the 1984 Cold War-era movie “Red Dawn.

Other videos showed civilians walking around the same tank, along with other charred wreckage.

Last week, a photo surfaced on Twitter showing a disabled Russian BMP-2 infantry fighting vehicle marked with the “Wolverines” tag. And now, much like the insurgency carried out by Patrick Swayze, Thomas Howell, and a collection of high school students from the town of Calumet, Colorado against a fictional Soviet invasion of the United States, the Wolverines tag is showing up more and more.

There is what looks like a burned-out BTR-80 armored personnel carrier, supposedly destroyed near Brovary, a suburb of Kyiv.

And then there is this photo of another destroyed T-72 with “Wolverines” painted in white on the side of the turret which, in this case, had not blown off.

And from Thursday, the wreckage of another BTR-82 seen by a French journalist in Nova Basan, again with “Wolverines” spray-painted across the front of the armored personnel carrier.

As we saw in the original movie — and we won’t be talking about the critically panned 2012 remake — the occupation of Colorado ends in disaster for the Soviet and Cuban occupiers. Taking their name from their old high school football team, the teenaged insurgents, among them Charlie Sheen, Lea Thompson and Jennifer Grey, are soon waging a guerilla campaign, leaving behind the “Wolverines” tag whenever they strike.

The invasion of Ukraine has seen an impressive proliferation of information warfare. There have been the memes. There have been tales of bravery that have ranged from muddled to almost certainly apocryphal, such as the “Ghost of Kyiv.”

How a 1980s movie reference made its way to the battlefields of Ukraine is unclear. But it certainly seems as if there will be plenty of more tanks and armored vehicles bearing the tag: “Wolverines.”