President Trump is posthumously awarding the Medal of Honor to an Army officer who called an artillery strike down on... 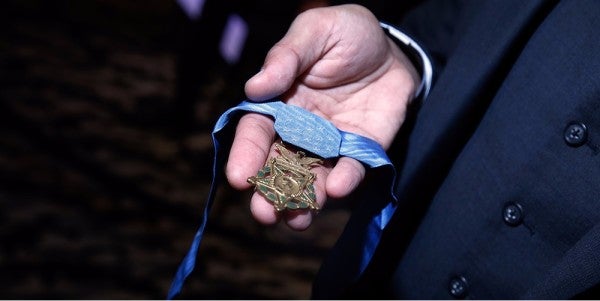 President Trump is posthumously awarding the Medal of Honor to an Army officer who called an artillery strike down on his own position to stop a German advance during World War II.

Then-1st Lt. Garlin M. Conner had just been treated at a field hospital for injuries and rejoined his unit after on Jan. 24, 1945, when he single-handedly stopped 600 advancing German troops and six tanks by calling in artillery strikes for three hours, the Lexington Herald-Leader reported. In the end, 50 German troops were killed and another 100 were wounded.

“Despite the enemy coming within five yards of his position and friendly artillery shells exploding around him, he continued to direct the fire of friendly artillery, which ultimately repelled the assaulting enemy elements,” the White House announced on Thursday.

Conner, who was reportedly the second-most decorated World War II soldier when he left the service, died in 1998. Trump called his widow Pauline Lyda Wells Conner on March 26 to let her know that her husband would receive the nation’s highest military award for valor, her attorney, Donald Todd, told Task & Purpose.

Todd, his son, Thomas, and Dennis Shepherd, an attorney for the Department of Veterans Affairs, successfully sued to get the Army to reconsider Conner for the Medal of Honor earlier this year, he said. Sen. Mitch McConnell, R-Ky., also helped pass legislation that helped Conner receive the award, a cause that three states, a bipartisan slate of politicians, and war historian Stephen Ambrose had all advocated over the years.

Pauline Lyda Wells Conner told the Clinton County News that she was skeptical when the White House first told her to expect a call from the president, so she asked a local attorney and his wife to be with her when Trump called.

“I was just scared to death that it was a scam of some kind,” she told the newspaper on March 26.

When it became clear that it was no scam, she told the newspaper: “I’m on top of the world right now, and that’s what I told the president when he called me.”