Feminist, surgeon, spy: Meet the only woman to ever receive the Medal of Honor

She received the medal for her “valuable service” and “earnest and untiring” efforts. 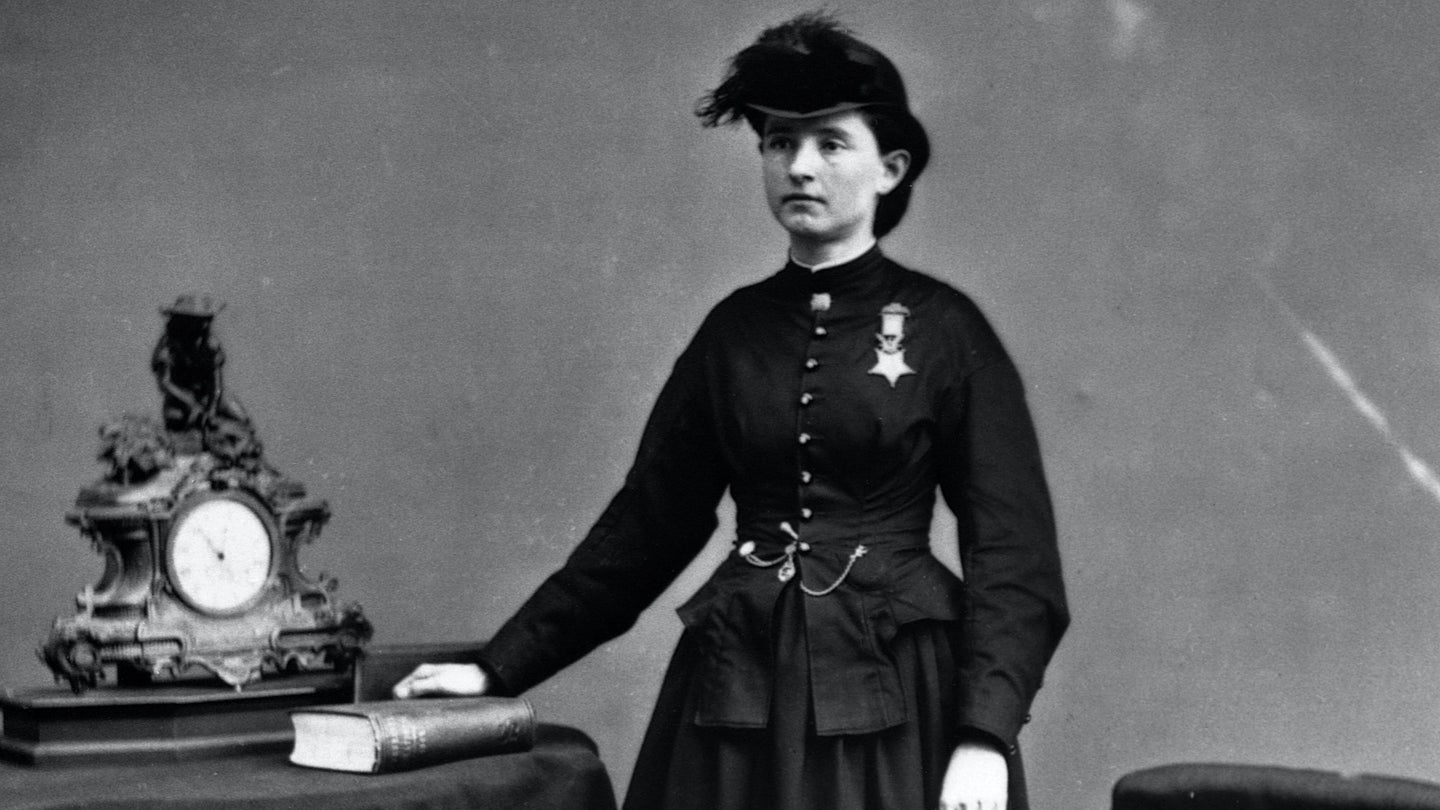 Dr. Mary Walker (1832-1919), an American physician and reformer who was an assistant surgeon with the Union Army during the Civil War, wearing the Medal of Honor, ca. 1866. (Photo by CORBIS/Corbis via Getty Images).
SHARE

The only woman to ever receive the Medal of Honor was exactly how you’d probably imagine her: Strong-willed, ambitious, and refusing to take anyone’s shit.

“Boys chased her and threw rocks at her,” Harris told NBC. “She once said that nobody would ever know what she had to go through just to step out the door each morning.”

Her parents insisted that she be educated just like her brothers, and in 1855 she graduated from Syracuse Medical College as a doctor, a profession not typically open to women at the time. She married Albert Miller, another medical student, while wearing a suit and top hat, according to the American College of Surgeons, and ditched the word “obey” in her wedding vows. The two opened a medical practice in New York. But the public “did not want to accept a female doctor,” according to the National Women’s History Museum, and the practice failed.

Then six years later when the Civil War broke out, Walker attempted to join the Army as a medical officer, according to NPR, but was rejected immediately — by the Secretary of War himself.

Walker met with Secretary of War Simon Cameron “wearing a bloomer-style outfit, which incorporated trousers and represented her interest in equal rights for women,” according to AARP.

“She did not present herself looking the way a very traditional 19th-century woman would look. So that I think doubly startled Cameron,” Theresa Kaminski, professor emeritus of history at the University of Wisconsin-Stevens Point and author of Dr. Mary Walker’s Civil War, told AARP. “He refused her right away. He said that women didn’t belong in the Army. He could barely tolerate the notion of women as doctors.”

Still, Walker refused to take no for an answer. She found places to volunteer and eventually became an acting assistant surgeon. The position essentially amounted to an “unpaid volunteer,” Dr. Allen Guelzo, the director of the Civil War Era Studies Program at Gettysburg College, told NBC News.

In 1862, Walker moved on to volunteer in Virginia, treating wounded soldiers at field hospitals around the state. In 1863, “her medical credentials were finally accepted,” and she was made “a War Department surgeon,” according to the Army.

Kaminski told AARP that other soldiers seemed to “hold her in pretty high regard.”

“She had more trouble with the male doctors than she did with the regular officers of the U.S. Army,” Kamisnki said.

Her time in the Army didn’t just include treating wounded soldiers; there are reports that she also worked as a spy. The National Women’s History Museum says Walker wrote to the War Department in 1862 “requesting to become a spy,” but was ultimately rejected. NBC News, however, reports that War Department records show Walker worked as a Union spy who “dug out Confederate secrets and ferried them back to her Army superiors.”

She regularly crossed into Confederate territory to help treat wounded civilians and soldiers. In one such moment in April 1864, Walker had just finished assisting a Confederate doctor with surgery, when was captured by Confederate troops. She was held as a prisoner of war for four months, refusing to wear women’s clothing provided to her, according to the museum.

It was shocking to Confederate soldiers to find a woman wearing mens’ clothing, according to the American College of Surgeons, which quoted a Confederate captain saying the crowd was “both amused and disgusted … at the sight of a thing that nothing but the debased and depraved Yankee nation could produce.”

“[She] was dressed in the full uniform of a Federal surgeon … not good-looking and of course had tongue enough for a regiment of men,” the captain reportedly wrote in his diary.

Some claims say that Walker was captured on purpose to continue spying for the North, according to the Army, but there was little evidence to support it. But Walker’s imprisonment “caused negative effects on her health,” according to AARP, including issues with her eye that kept her from performing surgery after the war.

Despite never having been commissioned into the Army, in 1886 she received the U.S. military’s highest award for battlefield bravery, the Medal of Honor. Her award citation describes her “valuable service” and “earnest and untiring” efforts. She “devoted herself with much patriotic zeal to the sick and wounded soldiers,” the citation says, “both in the field and hospitals, to the detriment of her own health, and has also endured hardships as a prisoner of war four months in a Southern prison.”

“Whereas in the opinion of the President an honorable recognition of her services and sufferings should be made; It is ordered,” reads he citation, signed by President Andrew Johnson. “That a testimonial thereof shall be hereby made and given to the said Dr. Mary E. Walker, and that the usual medal of honor for meritorious services be given [to] her.”

Despite the unique honor Walker received for her service, her fight wasn’t over. She continued advocating for women’s rights after her time at war, even attempting to register to vote in 1871 — 50 years before women would officially be given the right. She continued wearing clothes not traditionally expected of women at the time, and was “arrested several times” for “masquerading” as a man while wearing clothing like pants, according to NPR.

“I don’t wear men’s clothes,” Walker reportedly said during one arrest in New Orleans. “I wear my own clothes.”

In her later years, she welcomed others who were “ostracized, harassed, and arrested for not conforming to traditional ideas of how people should dress” into her home, according to the National Park Service.

Then in 1917, Congress attempted to take her Medal of Honor away from her. Congress changed the criteria for who could receive the Medal of Honor, saying recipients had to have fought the enemy in combat to be eligible. Walker was one of over 900 people whose medals were revoked.

In the years that followed, Walked refused to give her Medal of Honor back, wearing it “every day of her life, from the moment she received it to the day she died,” Sharon Harris, author of “Dr. Mary Walker: An American Radical, 1832-1919,” told NBC News. Her Medal of Honor was officially restored to her decades later by President Jimmy Carter in 1977. More than 130 years after receiving it, Walker remains the only woman to ever receive the honor.

At the age of 86 years old, Walker passed in 1919 from an illness. Ever the non-conformist, she was buried in a black suit.