“May God have mercy upon my enemies, because I won’t,” the old George S. Patton quote goes. In the theater... 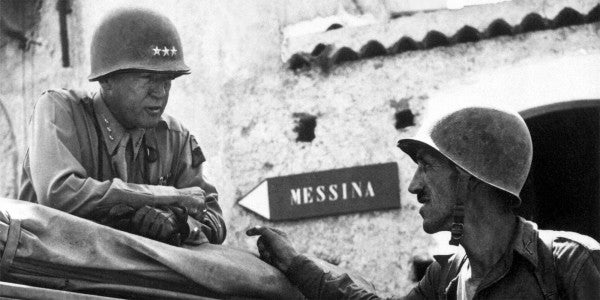 “May God have mercy upon my enemies, because I won’t,” the old George S. Patton quote goes. In the theater of war and on the page, Patton was nothing if not blunt and effective, like Conan the Barbarian with mechanized infantry. But there's more than meets the eye to the cantankerous general who's famed for slapping a shellshocked troop, racing through Europe to smash Nazis, and being portrayed by a hard-assed, pith-dispensing George C. Scott on the big screen.

You see, Patton was a poet.

Bet you didn't know it.

I sure didn't, and I'm kind of a nut for war literature. But Pennsylvania-based English professor Connie M. Ruzich schooled me this week with a post on her World War I poetry blog, Behind Their Lines. Turns out that before he was the badass bastard of Bastogne, Patton was a tank officer of some note in World War I — and a prodigious penner of rhymed verse.

How prodigious? Well, you can own a now-out-of-print volume with 98 of his poetic gems, if you're bold enough — and have the $400 to burn.

“His poem dedicated to the tanks he admired and commanded is one of his quirkier efforts,” Ruzich writes, and man, is she ever right:

Up and down the roadways,

through the German ranks,

Scrambling through the crater,

splashing through the pool,

bounding out of school.

Fritz is great on wirefields,

trust the Boche for that,

But his choicest efforts

Wasted in the weaving

When the merry infant class

scampers through the maze.

of an American brain,

back to France again.

On thru town and village,

Okay, as metered rhymes go, you could do verse. (Sorry.)

In any case, Patton was following a pretty solid tradition of doughboys in the Great War working out their labors and emotions in poem. Some, like German Siegfried Sassoon, were poignantly critical of the war and its costs; some, like John McCrae in his famous “In Flanders Fields,” were more jingoistic, if solemn.

Unsurprisingly, Patton's syntax and diction are more workmanlike than these — sometimes cringingly kitschy, but other times pointedly channeling the frustrations of a professional soldier. Take this diatribe, “Absolute War“:

Now in war we are confronted with conditions which are strange.

If we accept them we will never win.

Since by being realistic, as in mundane combats fistic,

We will get a bloody nose and that's a sin.

To avoid such fell disaster, the result of fighting faster,

We resort to fighting carefully and slow.

We fill up terrestrial spaces with secure expensive bases

To keep our tax rate high and death rate low.

But with sadness and with sorrow we discover to our horror

That while we build, the enemy gets set.

So despite our fine intentions to produce extensive pensions

We haven't licked the dirty bastard yet.

For in war just as in loving, you must always keep on shoving

Or you'll never get your just reward.

You are up shit creek and that's the truth, Oh! Lord.

So let us do real fighting, boring in and gouging, biting.

Let's take a chance now that we have the ball.

Let's shoot the works and win! Yes, win it all!

I don't know poetry, man, but I know what I like.