"Don’t use veterans to get back at your opponents in a partisan dispute.” 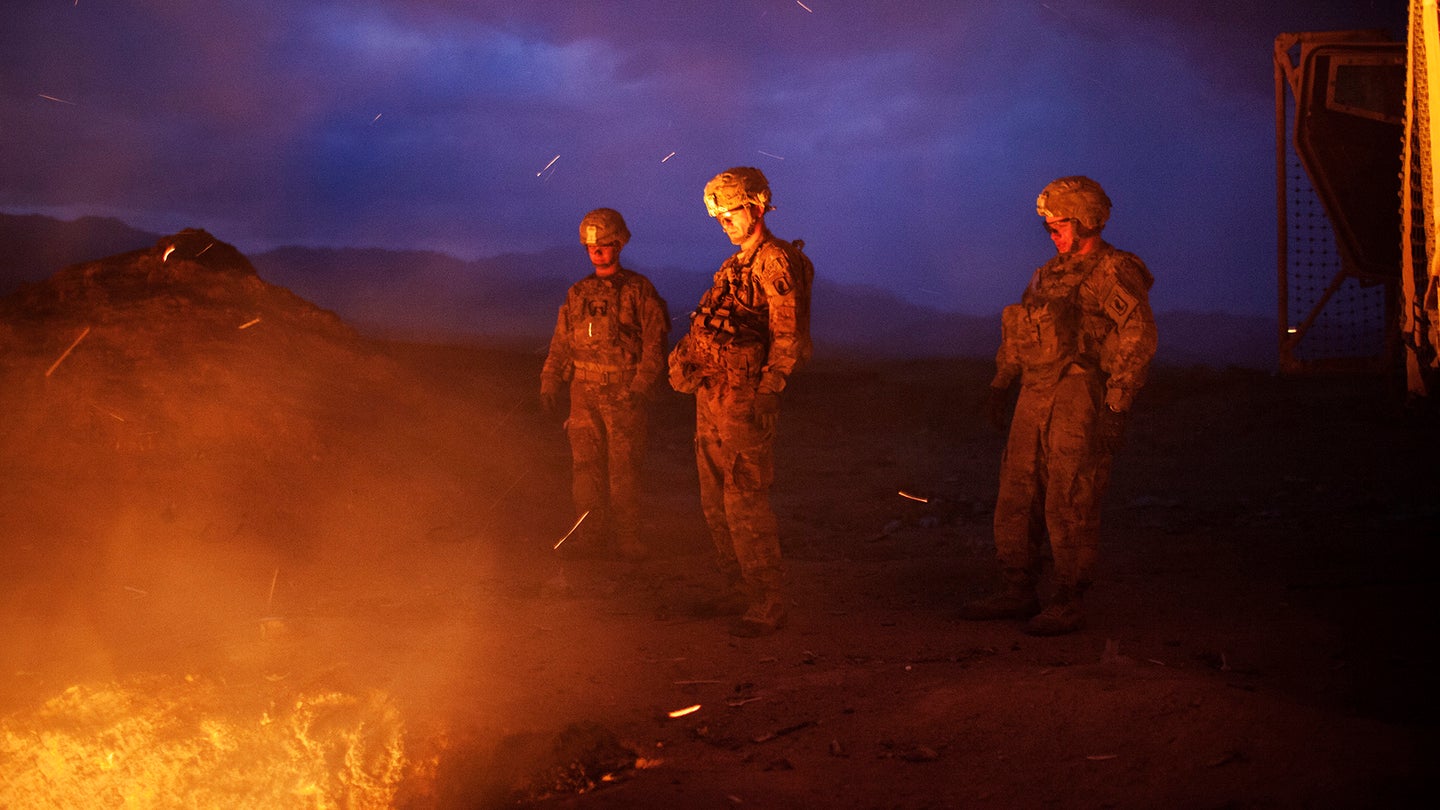 An estimated 3.5 million Iraq and Afghanistan veterans have been exposed to toxic substances from burn pits and other sources. (Lorenzo Tugnoli/For The Washington Post via Getty Images).
SHARE

Earlier this week, 41 Senate Republicans voted against a bill that would have expanded healthcare for veterans who are sick due to toxic exposures, outraging several veterans’ groups who have worked on this issue for years.

After voting took place on Wednesday, Democrats accused Republicans of blocking the Promise to Address Comprehensive Toxics Act, known as the PACT Act, to retaliate against a reported agreement between Senate Majority Leader Chuck Schumer (D-N.Y.) and Sen. Joe Manchin (D-W. Va.) that would allow Senate Democrats to pass new spending on the climate and healthcare without any Republican votes, according to the Washington Post.

Republicans, meanwhile, claim they support the substance of the PACT Act, but they argue the legislation would allow Congress to spend up to $400 billion on expenses that are not related to treating the estimated 3.5 million Afghanistan and Iraq veterans who were exposed to toxic substances from burn pits or helping Vietnam War veterans who are ill due to Agent Orange.

Regardless of the rationale, one thing is immediately apparent: Veterans are bearing the brunt of this partisan debate. Department of Veterans Affairs Secretary Denis McDonough announced on Thursday that the VA is ready to begin delivering expanded healthcare to veterans as soon as the PACT Act is signed into law.

“Vets and survivors have already waited too long for the health care and benefits they’ve earned — the Senate shouldn’t make them wait a moment longer,” McDonough said in a statement. “They must pass the PACT Act now.”

A day after Senate Republicans blocked the PACT Act, Schumer told reporters that the Senate would vote on the legislation again on Monday.

Politics aside, the purpose of the PACT Act is to create the presumption of service connection for 23 illnesses, including lung cancer, so that Iraq and Afghanistan veterans who have been sickened due to toxic exposures could finally receive medical treatment from the Department of Veterans Affairs. In layman’s terms, a “presumption of service connection” means the VA would assume that the diseases they are suffering from were caused by their military service. Currently, the VA denies about 70% of burn pit claims, according to the Iraq and Afghanistan Veterans of America.

The legislation would also make it easier for veterans who were exposed to Agent Orange while serving outside Vietnam as well as veterans suffering from Gulf War Illness to file medical claims with the VA.

Prior to Wednesday, the PACT Act had enjoyed broad support from both Republicans and Democrats – a rarity in Washington, D.C. The legislation passed in the House with a 342-88 vote and in the Senate with an 84-14 vote earlier this summer. Ultimately, the bill was sent back to the Senate to pass technical draft error corrections. Veterans groups expected that would be a mere formality before final passage.

Instead, the bill failed a procedural vote when 41 Senate Republicans voted against it, denying the legislation the 60 votes needed to overcome a filibuster. The bill’s defeat came after news of Schumer’s deal with Manchin broke, but Republicans told the Washington Post that their objection to the PACT Act has to do with money.

Republican Sen. Pat Toomey, of Pennsylvania, has been the PACT Act’s chief opponent. He has argued that the legislation has a provision that would move $400 billion earmarked for veterans’ healthcare into mandatory spending, which passes every year without any action from Congress. Toomey claims that move would allow lawmakers to spend the same amount of money in discretionary spending, which is appropriated by Congress each year.

“CVA understands the hesitation of Republican senators to advance the current version of the PACT Act, given that it would mean expanding the number of veterans eligible for VA healthcare at a time when The U.S. Department of Veterans Affairs is struggling to provide timely quality care and to be transparent about current wait times for care,” Byrnes said in a statement to Task & Purpose. “There are legitimate concerns about continuing to expand VA spending and reclassify it as mandatory.”

However, leading Senate Democrats have accused Republicans of flip-flopping on veterans’ healthcare. Sen. John Tester (D-Mont.) accused Republican senators who claim they voted against the PACT-Act even though they support it of “political malpractice.”

“We, in essence, took benefits away from the people who have been impacted by war – that we sent off to war – and we turn our backs and say: ‘No. We’re going to find an excuse to vote against our veterans while we wave the flag, talking about how great our fighting men and women are,’” Tester, chairman of the Senate Veterans Affairs Committee, said at a Thursday news conference.

“Senate Republicans have broken faith with veterans who were exposed to toxins and are now depriving ailing men and women of necessary care,” Reed, chairman of the Senate Armed Services Committee, said in a statement to Task & Purpose. “I have yet to hear a credible explanation for this flip-flop by so-called Republican leaders. Whether they reversed course over spending mechanisms or unrelated legislation, it’s sickening that they’re treating veterans with utter disdain and continue denying them access to needed care. I urge Republicans to stop playing partisan games with people’s lives. Our veterans deserve better.”

Veterans advocates have expressed their anger over the PACT Act suddenly stalling in the Senate after victory seemed so close. Mary Kaszynski, director of government relations for the liberal VoteVets group, has issued a statement blasting Republicans for blocking the legislation.

“Every second this bill is delayed and keeps sick veterans from getting the care they earned is unacceptable,” Kaszynski tweeted on Wednesday. “Republicans delaying this bill further is beyond reprehensible. We will not forget this disgusting display from the GOP.”

For veterans struggling with an illness due to toxic exposures, the delay in the bill’s passage means they will have to continue waiting for access to the VA’s healthcare system, said Tom Porter, who runs the Washington, D.C., office for Iraq and Afghanistan Veterans of America.

The fight to get the PACT Act passed by Congress has been a long one, and some of the veterans who have advocated for the legislation have died, including Army Sgt. 1st Class Heath Robinson of the Ohio National Guard, for whom the PACT Act is named, Porter said. Robinson’s mother and 9-year-old daughter were in Washington, D.C., on Thursday to urge senators to pass the legislation.

Porter said it is particularly galling that 25 Senate Republicans who blocked the bill on Wednesday had voted for the PACT Act when it first came to the Senate.

When asked if he believed the Republicans blocked the move to protest the agreement between Schumer and Manchin, Porter said: “I think that may have something to do with it, but what we’ll tell anybody is: Don’t use veterans to get back at your opponents in a partisan dispute.”