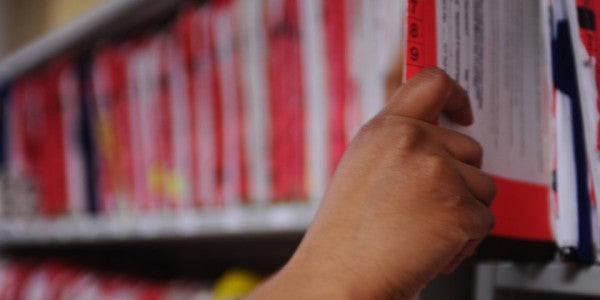 Last year, President Donald Trump signed the Appeals Modernization Act of 2017 into law — a policy meant to jump-start appeals reform within the Department of Veterans Affairs, with an eye toward ending the backlog of appeals for veterans benefit claims, which is sitting at around 470,000.

To meet that goal, by February 2019, the VA plans to offer five options for veterans seeking an appeal to their disability claim — but the first pilot program for those options, the Rapid Appeals Modernization Program (RAMP), is off to a slow start: Only 1% to 3% of veterans invited to use the program have actually registered.

RAMP’s shortcomings became the focal point of a Jan. 30 House Committee on Veterans Affairs hearing. Here’s why that matters.

First, this is what you need to know about the VA’s new plans for streamlining appeals.

The legacy process for appeals — which split jurisdiction between the Veterans Benefits Administration and the Board of Veterans’ Appeals — resulted in average wait times between three years through VBA, and seven years through the board.

The new appeals process offers a total of five options for appealing a disability claim decision:

RAMP is the first attempt at implementing some of the new appeals processes.

Launched in November 2017, the Rapid Appeals Modernization Program is entirely voluntary, and allows veterans to appeal their claims through the two new lanes under the Veterans Benefits Administration — the higher-level review and the supplemental claim lane.

The VA initially prioritized sending RAMP invitations to those veterans who have been waiting the longest for the chance to appeal their case to the board, but beginning this month, the department will start sending 12,000 applications to vets with new appeals. To date, 35,000 invitations to opt into RAMP have been sent out to eligible vets, but as of Jan. 31, only 391 veterans with 554 appeals chose to participate in RAMP.

Of those participants, 83 claims have been completed, with an average time of 37 days, Curt Cashour, the VA press secretary told Task & Purpose.

The low number of participants alarms some lawmakers.

Between 1% and 3.5% of eligible veterans have actually elected to take part in RAMP, according to the data VA provided T&P; on the number of invitations and RAMP participants so far, and remarks from Republican Rep. Phil Roe the chairman of the House Veteran Affairs Committee, and Rep. Tim Walz, the ranking Democrat, during Tuesday’s hearing. (The committee’s numbers may not have been as up to date as those the VA provided to Task & Purpose this week, as “the number is continually growing,” Cashour said.)

“Realistically, VA is running out time to address these issues if the department hopes to implement the system by 2019,” Roe said at the hearing.

There may be a good reason why so few vets with pending appeals are opting into RAMP.

One of the caveats of the program is that veterans will lose the chance to appeal through the legacy process if they jump on RAMP. So, if you’ve been waiting for years to have your case heard before the Board of Appeals and the date isn’t too far off, the idea of stepping out of line can be daunting.

“I think you did this right, you went to the oldest cases first and asked those folks,” Walz, himself a 24-year Army National Guard veteran, said at the hearing. “But I know as a veteran myself, there’s no way in hell I’m getting out of line at this point, if maybe that’s how they’re viewing it?”

That said, if a veteran wants to appeal a decision after going through RAMP, they can, and they’ll be at the front of the line for new lanes through the Board of Appeals come February 2019.

By the VA’s own estimates, they need a lot more vets to participate to make sure the new process actually works.

“In its supplemental materials, VA stated that the greatest risk to RAMP is a low participation rate among eligible veterans with legacy claims,” reads the GAO testimony submitted to the hearing. “VA also indicated that it would need 10% of eligible veterans to opt into RAMP to yield meaningful results.”

In January, the VA reported to the GAO that the monthly RAMP opt-in rate was about 3% for November and December, and 1% for January. To get those numbers up, Cashour told T&P;, the VA plans to invite some 490,000 veterans to take part in the program through monthly mailings by February 2019.

There’s also the concern that the pilot program doesn’t test everything that’ll go into effect next year.

The fact that RAMP doesn’t allow veterans to appeal to the board under the three new lanes — direct review, evidence submission, and a hearing — could be a significant omission, because VA won’t be able to test how the new Board of Veterans Appeals process works before it’s time to officially enact it next year.

“Our view is really that it would be beneficial for us as a VSO, and beneficial for vets who opt in to RAMP and think about opting in to RAMP, to test how the board process and new framework is going to work,” Carlos Fuentes, the director of national legislative services for the Veterans of Foreign Wars, told Task & Purpose. “They need training and a good SOP for the new process, so that any kinks that might arise can be taken care of.”