As of July 1, roughly 5,500 active-duty troops and more than 31,600 National Guardsmen were still taking part in coronavirus response efforts. 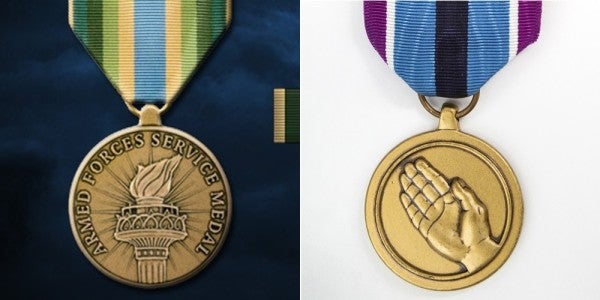 The Pentagon has authorized two awards for troops who have taken part in the U.S. military’s response to the novel coronavirus (COVID-19) pandemic that shows no signs of going away any time soon.

Those active duty, reserve, and National Guard troops who have participated in efforts to bring the coronavirus outbreak under control can receive the Armed Forces Service Medal and the Humanitarian Service Medal, the Defense Department has announced.

To be eligible for the awards, troops must have been mobilized starting on Jan. 31, Undersecretary of Defense for Personnel and Readiness Matthew Donovan wrote in a June 30 memo. Service members cannot receive both awards for the same deployment.

Troops must have deployed or been reassigned from their normal duties for at least 30 days – either consecutively or not – in order to receive the Armed Forces Service Medal, according to the memo.

However, if service members became sick with the coronavirus as a result of being activated, they only need to have deployed for one day to receive the medal, the memo says.

There is no specific geographic area where troops have to be deployed to be eligible for either award, the memo says.