"People say to me, 'You helped win WWII and now you are helping our country win this battle over this virus.'" 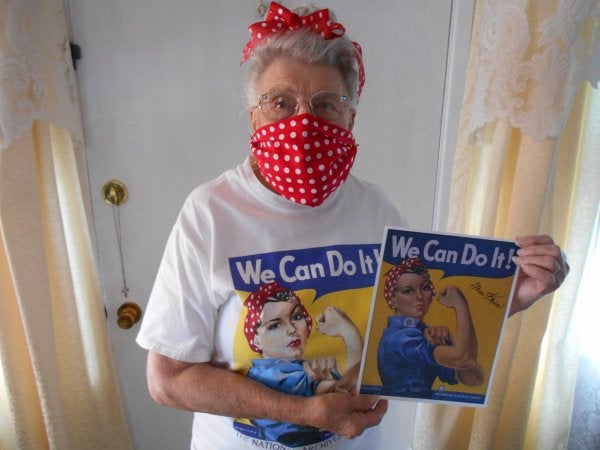 At age 94, Mae Krier is back on the front lines — hard at work, helping her country.

One of the nation's original “Rosie the Riveters” employed by Boeing in Seattle during World War II, she built B-17 and B-29 bombers to help support the war effort decades ago.

Now she's fighting a different war, as her still nimble fingers turn out face masks to prevent spread of the deadly coronavirus.

“People say to me, “You helped win WWII and now you are helping our country win this battle over this virus. These are nice things to hear,” Krier said.

She makes the mask like the red polka dot bandanas she also makes to remind people of the Rosies, those women who toiled in manufacturing plants with their heads wrapped in bandanas so their hair wouldn't get tangled in the machinery they used to make supplies for the military serving overseas.

They were depicted by a World War II era poster of “Rosie the Riveter” created by J. Howard Miller in 1943.

Krier, who lives in Levittown, is on a crusade to have the Rosies remembered for the service they gave in helping to win that terrible war.

And the United States House of Representatives have agreed with her that the Rosies should be honored with the Congressional Gold Medal, but so far, the Senate hasn't followed suit.

Related: We salute the all-women Air Force team that crushed a weapons loading competition dressed as Rosie the Riveter

“Sen. (Robert) Casey is the one who introduced this bill. The first year it didn't pass, so now we are working really hard to get it passed this year. There are so many deserving people out there to compete with, so it isn't an easy thing to do,” she said. Senate Bill 892 needs more than 60 co-sponsors but so far Krier said only 29 have supported it.

A similar bill also had a tough climb in the House when first introduced in March 2019 by Rep. Jackie Spier, D-14, of California, with three original co-sponsors, including Bucks County Rep. Brian Fitzpatrick, R-1, and two other California representatives.

But after Krier got back from visiting Normandy for the 75th anniversary of D-Day, where she sat with House Speaker Nancy Pelosi, dozens more representatives co-sponsored the bill, which was approved by the House and sent to the Senate for consideration in November, according to Congress.gov.

Since then, Krier has traveled across the country, trying to convince senators to support the measure, but had to stop in March because of the coronavirus. In previous years, the medal has been awarded to individual heroes, entertainers, sports figures and religious leaders as well as groups, including military units.

Krier started making the Rosie face masks to have something to do while hibernating at her home in Bristol Township.

“It kept me from getting bored…I've got to be careful. My only exercise I'm getting is my trip to the refrigerator,” she quipped. And she still gets out on her riding mower to cut the grass.

The face masks, like the bandanas, are helping her advertise the cause for the original Rosies to receive the Gold Medal. Many are, like Krier, in their 90s, and their numbers are dwindling.

“Someone put it on Facebook and it's sky-rocketed,” she said about requests that have come in. “People are wonderful.”

They even sent elastic, thread and other supplies to help with the project.

So far, she's made and distributed about 200 of the Rosie masks around the country. Pennsylvania State Rep. Melissa Shusterman, D-19, of Phoenixville, has worn one in the state Legislature and other people working in Washington have sent her photos of their families wearing the masks.

Related: ‘We can crank these out’ — Navy Seabees 3D-print 2,500 masks a day for sailors

Krier said she herself became a Rosie because her hometown in North Dakota lost its heart when the young men left for the service during World War II. So she, her sister and a girlfriend headed to Seattle to join in the war effort.

She started working on bomber production in May 1943 and continued until the war ended, even working with Italian prisoners of war who helped in the factory.

“We treated them so well, some of them married and stayed here,” Krier said.

She married her sailor husband, Norman Krier, in April 1945. He was a good dancer, she recalled.

They moved back to Bucks County to be near his family in Trenton. The couple had a daughter and son and were married almost 70 years before Norman passed at age 93.

“I've had a really good life,” she said, noting she now has three great-great grandchildren, including a little girl named Sadie Mae after her. She still has her health and goes to visit her doctor about every six months

Krier got married a few days after President Franklin Roosevelt's death and that unsettling time was terrifying for young people, she said. They had grown up with only one president, since Roosevelt was in his fourth term in office.

She recalls they didn't know much about Harry S Truman or how he would conduct the war, which was winding down in Europe but still going on in the Pacific. She said it must have been a “terrible burden” on the new president to use the atomic bomb to end the war.

“It's important that we go down in history,” she said about the Rosies, who made the planes, ships, vehicles and armaments that helped win the war. If distributing the face masks gets the Senate to award the woman the Congressional Gold Medal, she's all for making more. “I like it. It's a way of keeping our legacy alive,” she said.