A member of Hawaii’s Emergency Management Agency inadvertently sent out a warning that a ballistic missile was streaking towards the... 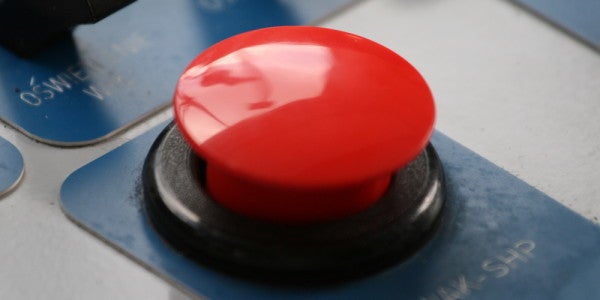 A member of Hawaii’s Emergency Management Agency inadvertently sent out a warning that a ballistic missile was streaking towards the islands after accidentally hitting a wrong button, an agency spokesman said.

At each shift change, the agency does an internal drill to check on its systems, Richard Rapoza told Task & Purpose on Saturday.

“During that drill, somebody clicked on the button on the computer and sent out a live alert,” Rapoza said. “That is not supposed to be part of the drill. It was a mistake.”

Hawaii Gov. Ige on ballistic missile false alarm: “It was a procedure that occurs at the change of shift when they go through to make sure the system is working. An employee pushed the wrong button.” pic.twitter.com/3XfcFejH47

Around 8 a.m. local time, Hawaii residents received the following alert on their cell phones: “Ballistic missile threat inbound to Hawaii. Seek immediate shelter. This is not a drill.”

The “wrong button” false alarm came at a particularly tense time in U.S. relations with North Korea, with the leaders of both nations bragging about being able to nuke the other at the push of a button.

Aerial footage shot of the University of Hawaii campus in Honolulu in the immediate aftermath of the alert showed panicked students streaming out of buildings and seeking shelter as instructed. The HI-EMA did not issue a retraction until some 15 nerve-wracking minutes later.

Students at UH Manoa were seen running for shelter in the moments after the missile alert mistake went out.

The state official who sent out the false warning made at least two errors, the Vern Miyagi, administrator of the Emergency Management Agency, told reporters on Saturday.

After accidentally clicking on the button to send a live warning, he clicked yes again to a message on his computer screen that asked, “Are you sure you want to do this?” Miyagi said at a news conference.

Miyagi was unable to explain why the person in question clicked on the wrong button twice. He also declined to say whether any personnel would be disciplined for the mistake.

“You got to know: This guy feels bad, right,” Miyagi added. “He’s not doing this on purpose. It was a mistake on his part. He feels terrible about it and it won’t happen again.”

Now the emergency system will now require two people to send out a live alert, state officials said. The agency is also looking at how to more quickly inform the public when an alert goes out by accident.

Miyagi also advised Hawaii residents to stay up to date on news about North Korea so they will know when tensions are high. He said he guessed the initial warning was a mistake because North Korea and South Korea have begun talking.

“When I saw this today, when I heard this today, I thought something was wrong, it was a false alarm, mainly because the tensions were not there to start something like this,” he said.

The agency is talking to technicians to determine why it took so long to let Hawaii residents know that the warning was an error, he said.

“Right now, what we’re looking at is whether we need to change our procedure to make sure that it’s not that easy to make a mistake – and also to ensure that we have a cancellation and an all-clear process to make sure that we’d be able to inform the public more quickly that there was an error or a false alarm,” Rapoza told Task & Purpose.

“We understand that, clearly, we need to improve that process,” he added. “In light of what happened this morning, we’re looking very carefully at every step of our process. We know that our credibility with the public is absolutely vital – and we know that we let the public down, so we’re checking every step along the way.”