The Military Is Next: America’s Tide Is Turning Against Sexual Assault And Harassment

There is something vindicating about seeing the faces of “the silence breakers” on the cover of Time Magazine’s latest Person... 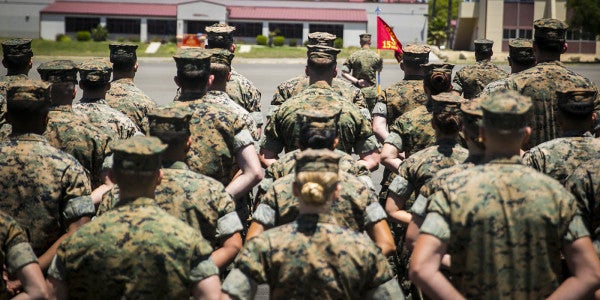 There is something vindicating about seeing the faces of “the silence breakers” on the cover of Time Magazine’s latest Person of the Year issue. These women (and men) had the courage to publicly call out sexual misconduct by powerful men in Hollywood, and their recognition is special for every person who has experienced sexual misconduct and felt the pressure to stay silent about it.

As a combat veteran, I chose to remain silent when I was assaulted in Iraq by a higher-ranking sergeant in 2003.

I was advised by senior male soldiers I admired to not report the incident formally. “You’re asking for a lot of trouble if you report this,” they advised. “Your career is more important than this.” I listened.

I have thought about that choice many times, and each time I feel guilty that my silence left the door open for the offender to do it again.

When silence gets baked into the system

The silence-breakers are changing that story. Instead of career devastation, the accusers who are coming forward are being celebrated, and many men in positions of power are suffering public career ruin that even an apology letter and time with a therapist won’t make right.

In the military, when a lower-ranking service member is assaulted by someone in a position of power, they must report this to their supervisor (through their chain of command) in order to file a complaint. Sometimes this “supervisor” can include the perpetrator, or a friend who is close to them.

This isn’t all that different from a young woman in Hollywood being forced to report her powerful producer’s sexual misconduct (i.e. Harvey Weinstein) to a member of the production company’s board of directors… or drop the subject. There isn’t a way to appeal to an authority who is not directly connected to, and perhaps even dependent upon, the abuser.

When the men and women serving our country can’t report sexual misconduct outside of their chain of command, victims will choose to not come forward. Sexual offenders will continue to fly under the radar, serve out a successful career, and evade consequences for their actions.

Lots of work left to do

Last spring, the Department of Defense’s Sexual Assault Prevention and Response Office published a report on military sexual assault in fiscal 2016. SAPRO’s findings were jarring: nearly 15,000 sexual assaults against service members that year alone. But 7 out of 10 service members did not report their assaults in an “unrestricted” (actionable) manner to their chain of command, showing a severe lack of confidence in the current system.

Of those who were brave enough to make an unrestricted report, approximately 60% told the Department of Defense that they had experienced some form of retaliation for reporting.

What did all of that personal risk get victims? Not much. More than 70% of cases considered for court-martial were never even referred to court-martial proceedings. And just 9% of cases ended in conviction.

In 2014, Sen. Kirsten Gillibrand, the New York Democrat, introduced a bill that would have allowed service members to report sexual assaults to authorities outside of their chain of command.

That idea, however, didn’t sit well with senior military officials. who thought it impugned the good name of their services’ leaders. “Removing commanders from the military justice process sends the message to everyone in the military that there is a lack of faith in the officer corps, Gen. Martin Dempsey, then the chairman of the Joint Chiefs of Staff, told Congress in a letter challenging Gillibrand’s bill. “Conveyance of a message that commanders cannot be trusted will only serve to undermine good order and discipline.”

The idea of maintaining confidence in commanders, even at risk of chilling some victims out of reporting their assaults, won the day. Gillibrand’s bill failed in favor of a lighter proposal introduced by Senator Claire McCaskill, the Missouri Democrat; notably, her bill kept the chain of command looped into sexual assault cases.

Nevertheless, improvements have been made to support victims of military sexual trauma. The Pentagon reported the estimated number of sexual assaults in the military has dropped from 20,300 in 2014 to 14,900 in 2016, and reporting rates are estimated to have increased by 9%.

Even though there is progress, Gillibrand has called the military sexual assault statistics for 2016 “appalling,” and she is continuing to fight for sexual assault victims’ rights, including those in our military.

Now may be a better time than ever for action. When I see the silence-breakers’ bravery and more offenders being brought to justice, I know this is progress. Regulatory reforms have been hard to come by, but cultural change is happening, and very rapidly. That means hope is coming for all of us — including the women and men serving our country.

Nichole Bowen-Crawford is a U.S. Army veteran who served in Iraq.  She has appeared on CNN, NBC News, New Day Northwest, and KOMO News. Her veteran’s advocacy work with Senator Patty Murray was featured in the Seattle Times, and the LA Times. She has spoken in D.C. on behalf of Service Women’s Action Network to members of Congress to advocate for victims of military sexual trauma. Nichole has her M.Ed. in Counseling and Human Relations and is working on completing her book Lady Warrior Project: 22 True Stories of Combat, Triumph, and Healing by Fall 2018. Follow her on Twitter at @nichole_lwp.