Mother Earth is apparently trying to devour the Marine Corps

If Marine recruits are the lowest form of life on Earth, then their upcoming descent into the depths of the planet will be a walk in the park 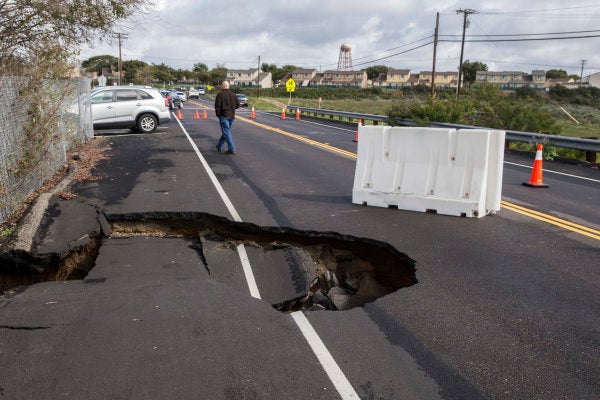 If Marine recruits are the lowest form of life on Earth, then their upcoming descent into the depths of the planet will be a walk in the park.

Several sinkholes are currently menacing at least two Marine Corps installations in the continental United States, according to media reports.

A large sinkhole tore into a Camp Pendleton roadway on Monday, closing the road and closing a base elementary school for two days, NBC News reported. The Marines at the California base were filling it with gravel and putting a steel plate over it as a stop-gap, according to its Facebook page.

Two days later, a series of sinkholes that opened near Marine Corps Recruit Depot Parris Island forced base officials to close down a major causeway, the Island Packet reports.

When reached by Task & Purpose, a Camp Lejeune spokesman could not immediately confirm the presence of sinkholes near the base. He did, however, mention that storm damage to nearby trestles caused by Hurricane Florence had limited the base's ability to transport equipment.

Surprisingly, the Marine base at 29 Palms is also (currently) unaffected by sinkholes, thus keeping its 2.5 star rating on Yelp intact.

Undeterred by Mother Earth's belligerent posture, a contingent of Marines invaded California's Red Beach with the assistance of Japanese service members as part of amphibious assault training in a stunning counterattack.

SEE ALSO: The Inside Story Of 'Recruit Mullet,' The Future Marine Here To Kick Ass And Drink Beer

WATCH NEXT: US Troops Drank All Of Iceland's Beer