When it came to detecting nuclear, biological and chemical agents, Marine Corps planners decided they something more low-tech. Really low-tech. 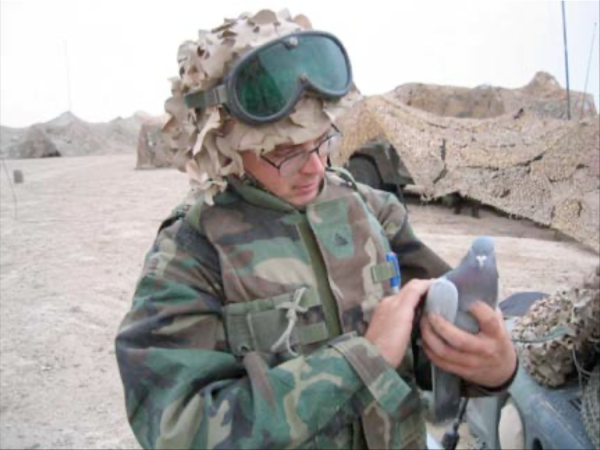 When the 1st Marine Division invaded Iraq 17 years ago this week, it brought along a host of high-tech weapons and sensors, including surveillance drones, Javelin missiles and Blue Force Trackers. But when it came to detecting nuclear, biological and chemical (NBC) agents, Marine Corps planners decided they something more low-tech. Really low-tech.

Of course, pigeons have a long history of being used as messenger birds between armies at war. But why, pray tell, in a world of beeping radio machines and electro-satellite-doodles, would the Big Green Machine require that humble, grey-feathered bird today?

Well, as explained by the Marine Corps History Division in its 2006 account With the 1st Marine Division in Iraq, 2003, the division was worried that petroleum-based vapors would throw off the effectiveness of the usual systems the Corps used to detect NBC agents.

Though the report doesn’t say where such vapors would come from, it says that the vapors could lead to false alarms and Marines putting on their bulky Mission Oriented Protective Posture suits, gas masks and gloves for no reason, which “degraded the performance of the Marines,” the report said.

The 1st Marine Division needed a new system, and their NBC expert, Chief Warrant Officer Stacy Jeambert, had an idea.

However, his first idea wasn’t pigeons. No, it was something far more dangerous: chickens. Jeambert thought the chickens could serve as a canary in a coal mine by picking up on NBC agents in the air, even in a petroleum-contaminated environment.

But the chickens didn’t take well to the Kuwaiti desert. What happened next is best described by the report:

The integration of these new ‘marines’ into the Division was difficult. Several of the birds disappeared immediately, followed by suspicious cooking fires in hidden corners of the camp. Others made their escape from the hands of inexperienced chicken wranglers and ‘deserted’ into the desert.

Most, however, died before they got to see any combat action due to the extreme climatic conditions. Apparently, the birds sold to the Marines by an enterprising young Kuwaiti were civilized laying hens and not ‘yard birds’. When exposed to the daily living conditions of the Marines, these civilized animals quickly broke down and died.

So the chickens were a bust, but the Marines know how to improvise. It was time to bring in the homing pigeons, which the report described as “a more robust and hardy species … used to living in the desert heat (and they had much less meat).”

The pigeons were fielded to Regimental Combat Teams and separate battalions, and some Marines even took to naming the birds, the report said. Cpl. Joshua Hardy, for example, named a bird Pidgeodo, which made it all the way to the deposed Iraqi dictator Saddam Hussein’s palace in Tikrit before the pigeon was “relieved of his duties and mustered out of service,” the report said.

The report does not say whether the pigeons were any good at detecting NBC agents in the field, but they were certainly entertaining, the report wrote.

“The skepticism and humor with which this employment was met also provided valuable comic relief at a time of heightened tension,” the report says, in true Green Machine verbiage. “A sense of humor was a critical aspect of courage as the Marines prepared to attack into the unknown.”