The unexpected development of the pup tent

“Pup tents” were most likely named by Civil War troops, who commonly used the word "dog" for military slang, such as "dog tags" 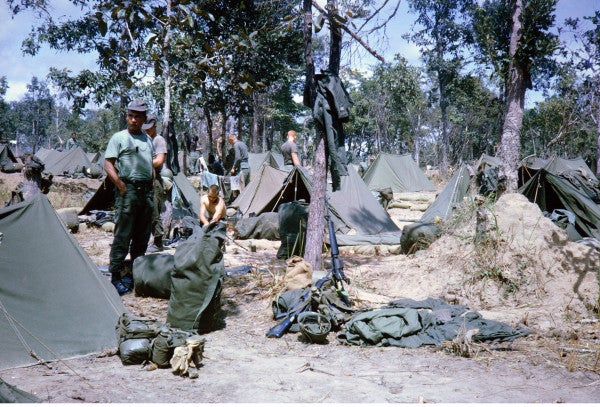 If you’re in the military, you’ve slept in some unusual places. It’s part of the job description. But whether you’ve sweltered in a quonset hut or shivered on the ground in a personal sleeping system, you’re probably grateful that military tent technology has improved over the years.

An innovation that helped shelter soldiers and make units more self-sufficient was the development of the “pup tent.” These small sleep tents were often shared by two soldiers. The weight of the material, stakes, and poles were generally around ten pounds. If two soldiers carried half, then each would only have an additional five pounds on his back.

“Pup tents” were most likely named by Civil War troops, who commonly used the word “dog” for military slang, such as “dog tags.” One story points to the Chattanooga Infantry who gave their tents the nickname “dog houses.” From there, the name transformed into “pup tents.”

From canvas A-frames that rotted in the rain to modern tents with mosquito netting, check out the unexpected development of the pup tent throughout America’s wars.

If you were fighting the British for independence, chances are you’d be billeted in civilian houses. When soldiers did stay outdoors, they used simple A-frame tents made of a single sheet of cotton duck cloth— the same material that’s used for sandbags. Without floors, this cloth was held up by either tree branches or rifles. Not only were these shelters open-ended at either side, they were also prone to rotting or disintegration. Sounds like the Continental Army established the practice of buying from the lowest bidder!

During the 19th century, the pup tent shelter design evolved into two half sheets that fastened together with a row of buttons or snaps along the ridge line. Any pair of shelter half pieces could be fastened together with a watertight closure along the top line, creating a shelter 7' long by 5' wide. Although it was a great improvement over the single sheet A-frames of the Revolutionary War, these shelter halves still lacked a floor, were open-ended, not waterproof, and relied on tree branches or rifles for the frame. So yes, every infantryman slept with their rifle… but they used it to hold up their tent!

By the end of World War II, service members were no longer using rifles and tree branches to hold up their tents. Instead, tent pole frames transformed from a single folding unit to three separate sections comprised of wood with metal tips. This made transportation of the poles easier, particularly when divided between two men.

By the time the Korean War ended, tents had two new important innovations. First, colors changed from khaki to dark green, and poles went from unpainted wood to a matching army green. But much more importantly, tent flaps were added. Finally, the military tent was able to protect troops from wind and rain. That took long enough!

Vietnam's tropical climate wasn’t a good match for pup tents. However, some tents were used and they developed a new A-frame style with two poles. This design created roomier accommodations for warfighters, and was used up through the Gulf War

Modern military leaders struggle to balance unit speed with soldier load. The addition of electronics and amour has greatly increased the burden on warfighters. In response, the modern pup tent has moved away from the bulkier shelter-half designs of the past. Today’s modern dome Pup tents are extremely lightweight (usually under 5 lbs), more durable, fully waterproof, and incorporate the use of mosquito mesh netting. All these advancements give warfighters greater mobility and protection. The most popular military-issued Pup tent is the LiteFighter 1.

These modern tents incorporate extremely lightweight water repellent materials, roomier dimensions, weatherproof gear vestibules, and advanced foldable frame systems. Additionally, shelters like the LiteFighter 1 are configurable to various missions. For example, it can attach to a standard issue cot that keeps fighters off the ground and doubles as a mosquito net. One lightweight piece of gear that serves multiple functions sounds like a major improvement in tent technology.

LiteFighter Systems is the leading provider of small tactical shelters to the U.S. military, and continues to develop innovative shelter systems that address the needs of an ever-changing battlefield.They provide warfighters with the right shelter system to increase unit speed and reduce logistical supply trains. Whether you are fighting today’s wars or going on tomorrow’s missions, this is one piece of gear you will want to carry with you.