Why Is The Marine Corps Gazette Undermining The Corps On Women In Combat?

About 18 months ago, I submitted an article to the Marine Corps Gazette about integrating women into the combat arms.... 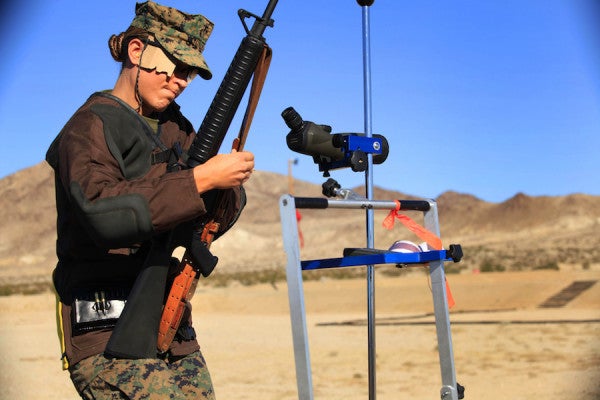 About 18 months ago, I submitted an article to the Marine Corps Gazette about integrating women into the combat arms. I received an unexpected response from the editor stating that the Gazette was not interested in articles that were “thinly veiled ad hominem attacks on the Commandant.” The Armed Forces Journal took a different view and published my article. In the intervening year, I have watched the Gazette publish multiple articles that patently support an anti-women Marines stance. But the most egregious example is the article that the Gazette published this month with the tagline that it had received first place in the Maj. General Harold W. Chase essay contest. This article, “Why Women Don’t Belong in the Infantry,” garnered a number of heated responses from both men and women. Two noteworthy challenges came from Marine men. The Gazette published one piece that challenged why this was an award-worthy article, saying that it is “neither bold nor daring” to advocate for the status quo. The other called the article “sororicide” because it was written by a woman who said that women who want to serve this country in the infantry are selfish.

Last week, I attended the quarterly meeting of the Defense Advisory Council on women in the services. During opening remarks, Council Chairwoman Holly Hemphill called attention to the Gazette article. Although her comments were civil, it was clear that she could barely contain her anger over the article that she said undermined women Marines. When the Marine Corps’ representative, Col. Anne Weinberg, took the podium to present the Corps’ combat integration update briefing, she began by distancing the Marine Corps from the article stating that the Gazette is a private publication and not an official Marine Corps publication. Is this true?

A check of the Marine Corps Gazette’s website reveals the close relationship between the Corps and this “private publication.” First, the Gazette is a publication of the Marine Corps Association and Foundation which is “the professional association for ALL Marines.” The foundation has over 76,000 active-duty, reserve and retired Marine members and is led by a board of directors, nearly all of whom are retired or active-duty Marines. Second, the Gazette is touted as “the professional journal of U.S. Marines” and is also headed by retired Marine officers. Finally, both the foundation and the Gazette have offices inside the gate on Marine Corps Base Quantico. Clearly, the Gazette is at least an endorsed magazine of the U.S. Marine Corps.

So, why does the Marine Corps continue to allow the Gazette to publish articles that undermine women Marines and an integration effort they are clearly working toward? I would like to think that they have done so in the spirit of open debate, but in light of my own experience with the Gazette, I think otherwise. Not only was I not able to get my thoughts published in the Gazette, but with just a few exceptions, almost every article the Gazette has published about integrating women into combat units and branches has been against women. And now, not only have they published yet another article that says that women don’t belong, they have given the author a prestigious award.

The Marine Corps’ professional association has clearly come down on one side of this debate while the institution moves forward in the other direction with full integration. Having the institution’s efforts undermined by its professional association is confusing at best and destructive at worst. It is confusing because Marines are left to wonder if the Gazetteis providing an “unofficial” position of the Marine Corps. It is destructive because it says to the dozens of women Marines who have successfully completed the enlisted infantry training course that they made a mistake. It says that they shouldn’t have gone, they don’t belong, and their accomplishments aren’t valued.

Recent statements by active-duty Marine leaders, supported by an upcoming “60 Minutes” report, show that the Marine Corps leadership is fully committed to including qualified women Marines in the ground combat elements of the Marine Corps. The Gazette’s articles are undermining, not only the efforts of the institution to foster a fully inclusive Corps, but the respect afforded to women Marines. The Marine Corps needs to reign in its professional association or publicly distance itself from its activities.