Last week, the Marine Corps announced that starting this October, it will allow company-grade female Marine officers to attend the... 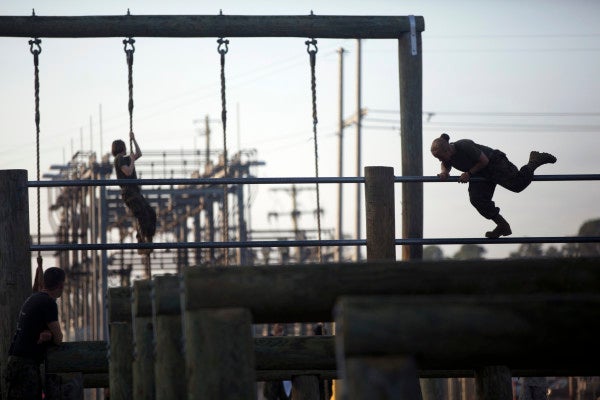 Last week, the Marine Corps announced that starting this October, it will allow company-grade female Marine officers to attend the infantry officer course or IOC. It’s about time. The women, if they pass, will still not be allowed to serve in the infantry, but the hope is to get more experienced officers to take the course, because to date only 20 entry-level officers have tried the course and all have failed, while 86 enlisted female Marines have passed their version of the infantry course. The major hurdle for the recruits seems to be the Combat Endurance Test given at the beginning of the course, which wipes out a significant amount of officers on the first day, including men. Only one woman has passed this test, only to fail out later on, due to injury. Therefore a debate has reignited surrounding the test and what its purpose is for the course, whether or not Marines should be able to retake it later on in IOC, and how it should be looked upon within the Corps: a required occupational skill or a traditional initiation rite? Is this a sign that women have no place as elite Marine infantry officers?

No, that’s ridiculous. First off, let’s look at the numbers. Twenty women have tried and failed the course. The Marine Corps has a goal of recruiting 100 women to take the course by the end of the year. Females only make up 6% of the Corps, and there are only 1,000 company-grade female officers. But these women are already serving in other jobs, so getting them to volunteer could be tough. And they only get one shot. They are not allowed to retake the course like their male peers because they are not allowed to actually serve in the infantry yet, even if they did pass. They have to move on to their job-specific school. This may be more about moving their careers along, rather than discrimination, but it provides little incentive to women to actually train and go through such a grueling course.

Furthermore, as 2nd Lt. Sage Santangelo pointed out in her Washington Post, female Marines (and female soldiers, for that matter) are not held to the same physical standards as men, therefore, they do not build up the strength and endurance required for the tougher courses. The Marine Corps took this into consideration and now women who want to go to IOC must be able to pass first-class male physical standards, to include five pull ups. This is to ensure that females are just as prepared as males to attend the course and requires women to start training for such requirements.

Col. Ellen Haring sparked a debate when she suggested the CET is not an occupational standard, but instead is a type of initiation rite and builder of esprit de corps. She has a point. I don’t doubt that any one of these female officers could hack it if placed in an infantry platoon in Afghanistan, even without the prestigious CET. And once again, any talk of changing anything, such as when during the OIC the CET is taken, most likely will result in the argument that this is “lowering the standards for women.” However, if the Marine Corps is serious about allowing women into the infantry — which it should be as it is DoD mandated — it should allow those women who actually want to serve in such an outfit to retake the course like the men.

The Corps should also consider having the CET later on in the course as in previous years. This would allow women to build their endurance since they are being required to train at a different level. This would also recruit more women to attend the course if it actually meant they would get the qualification. The Marine Corps can afford to be more rigid on who it lets in as all branches of the military are trimming their numbers. This should be taken into consideration. As the Marines spend millions on “testing” women in special units, they may find it more affordable to just allow the women who want to be infantry officers to retake the course.

But even if the CET is an initiation rite and not an indicator of how well a Marine will actually perform in combat, I am still leery of changing the actual test itself in lieu of women. This does signal the “lowering of standards.” 2nd Lt. Emma Stokien makes a good point when she says that women already have to prove themselves to earn the same respect as their male counterparts, therefore, any “perceived lowered standards” would continue to undermine female officers’ respect.But I don’t think enabling men and women to retake the test would be lowering anything. I would only add that it’s possible no matter how women get into the infantry that there may always be a perception that standards are lowered for them.

Perception is the key word here. No amount of pull ups will override the cultural issues that prevail. This is where the military as a whole needs to take a critical look at itself and what has happened over the last 13 years. Training, culture, and standards might be etched in manuals that preach tradition and perfection, and no doubt have worked at times, but our military is far from perfect. The Combat Endurance Test might only determine whether or not Marines can endure the test, but not necessarily combat. The Marine Corps has to decide just how important this initiation is to the whole of the infantry officer and the value actually is of not letting officers retake it.