The Argument For Women In Combat Should Be About Mission Effectiveness

Recent weeks brought a number of historic firsts for women in ground combat forces, reigniting the debate surrounding the role... 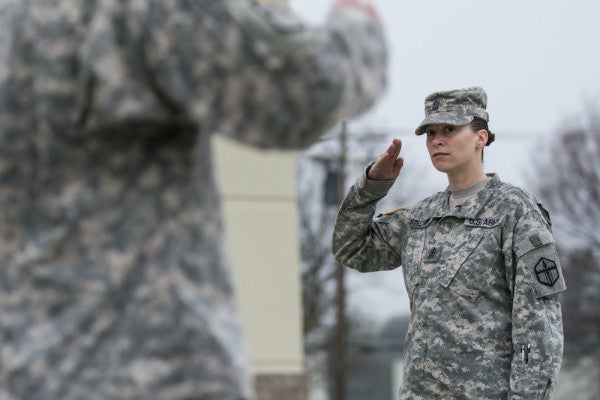 Recent weeks brought a number of historic firsts for women in ground combat forces, reigniting the debate surrounding the role of women in the military. On Jan. 30, five women passed the Ranger Training Assessment Course, securing their places at the first integrated Ranger School assessment scheduled for April — and with it, the potential to yield the first women with Ranger tabs. Less than two weeks later, a female first sergeant took charge of a combat engineer company for the first time. These two bookends signal a monumental leap forward; the former foreshadowing women’s potential to succeed in the elite forces, the latter solidifying their ability to lead the conventional forces that bore the weight of sustaining the past 13 years of war.

Response to these achievements has been mixed. Five minutes spent in the comments section of any online news source covering these recent milestones is all it takes to see just how contentious the issue is. These debates demonstrate the wide chasm between the energy necessary to change policy, and the energy necessary to change culture. Policy change can be imposed externally; culture change — arguably the more difficult of the two — must be organic.

Perhaps the most significant impediment to wide-scale culture change is the way the debate is largely framed. What’s at stake is not fundamentally a gender issue; it’s a talent management and workforce optimization issue. The military is in a fierce competition with the labor market for adaptive, innovative leaders. How can the armed services, particularly the ground forces, appeal to service-minded, competitive, and qualified individuals? How can it make the best use of its entire talent pool? In order to ignite a full-scale shift in culture, the military must frame full integration in terms of mission effectiveness, not simply equal opportunity. It must earn the buy-in of existing stakeholders (most of them being men) in terms that matter and resonate with their core cultural values.

In practice, at the individual level, service members have been adapting for over a decade. The statistics alone tell a story; between 2001 and 2011, over 280,000 women deployed to combat zones, comprising nearly 12% of all service members deployed. During this time, while women were technically excluded from combat positions, the number of women killed while actively engaging the enemy (approximately 100) or wounded in action (approximately 900), as well as the nearly 10,000 female soldiers who received the Army Combat Action Badge, speak to their presence, commitment, sacrifice, and leadership on the battlefield.

From a mission-effectiveness perspective, women on the battlefield added to the military’s adaptive capacity. In an interview with Task & Purpose, Jenny K. Hartsock, who deployed as an active-duty Army engineering officer in Iraq in 2007, noted that female combat engineers were “only allowed to serve in the HHC and FSC units. … until our men received too many concussions due to IED blasts, and women were then required to backfill on our route clearance patrols, where they performed remarkably .”

One of the primary ways to signal that mission effectiveness is the end goal — and thereby encourage the buy-in of all service members — is to maintain standards that ensure success in hostile environments. As such, the completion rates for women in the Ranger pre-assessment course should actually dissuade detractors who claim “standards will inevitably be loosened.” Just as the low passing rate for men (roughly 50-55%) indicates how remarkably tough the course is, the 19% pass rate for women indicates two things: 1) there are women capable of passing the course, and 2) standards haven’t been relaxed in order to increase their presence.

How will this benefit both male and female service members, and the military as a whole? First, increasing the pool of vetted service members — whether the vetting comes through a Ranger tab or other standards-based qualifications — provides the services with a greater opportunity to select the right person for specific jobs in specific circumstances. Second, this increases the equity for male service members as well; currently, only men are required to list combat arms positions among their choices when selecting a branch of service upon commissioning, sometimes to the detriment of their true preferences. Expanding the pool of talent available for combat arms positions will enable better management of the force on the whole. And third, the military is a culture that thrives on competition — physical, mental, emotional, and spiritual. The addition of anyone capable of raising the bar increases the capability of the entire service; a mission all service members can buy into.

As ground forces shed their numbers in the post-war drawdown, the imperative to recruit and retain capable individuals who best fit the needs of the military only increases. By clearly articulating the needs of the military and maintaining standards that will yield success on the battlefield, the services stand to gain significantly by increasing the field of competition to include all service members, regardless of gender.