The Women Graduating Ranger School Had It Harder Than I Did

In a historic first, two women have passed Ranger School and are set to graduate this Friday. There’s a lot... 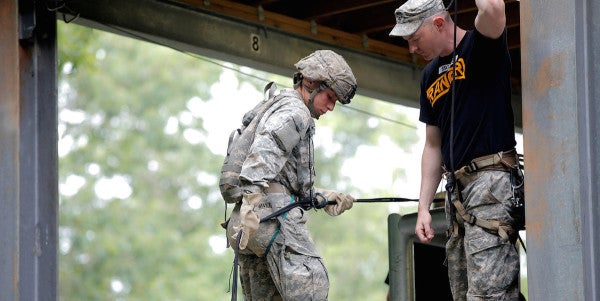 In a historic first, two women have passed Ranger School and are set to graduate this Friday. There’s a lot of hyperventilation about this from the usual corners: Some say that this is indicative of an overall weakening of standards in the military, others imply that President Barack Obama and the liberal left somehow conspired to cheat the women through, or something. However, shining bright through the muttered outrage and sour-grape peddling are some solid facts about Ranger School and the experience of these two female Ranger grads that I hope the haters consider.

I graduated Ranger School without being recycled in 2006 and went on to deploy twice to Afghanistan on combat missions. I feel pretty qualified to explain how the female Rangers had it worse than I did.

Ranger School is hard, physically and emotionally. For 60 days, students (aka “studs”) eat no more than two meals a day, get three-to-five hours of sleep, and are either subjected to the equivalent of two-to-three hours of intense physical hazing per day, or are marching quickly between 5-to-10 miles with 40–80 pounds of gear on their backs, carrying a weapon, in daytime or night. Meanwhile, a group of perpetually enraged sergeants — Ranger instructors — yell at the students for any error, forced or unforced, whether it was the student making it, or the student’s group, or someone completely unrelated to the student. The yelling often induces open weeping. Students cry.

I cried in Ranger School, secretly when nobody was watching. I also thought I was going to die once when, at the end of a 10-mile ruck march, we had to run two miles while jumping up and lying down in the mud pretending to get hit by artillery, carrying “wounded” comrades in 80-degree heat by their arms and legs. I foraged for food in a dumpster with some privates from Ranger Battalion before it was explicitly forbidden, so I learned that I was willing to eat trash. I snuck naps when and wherever possible. I passed out while conducting guard duty. Once, I woke up on top of a machine gun emplacement, literally draped over the machine gun like a fleshy blanket — my chest and face sore from sleeping on a giant metal log. Another time, I woke up somewhere in a Florida swamp and had to walk around in the dark for 30 minutes before I found my patrol base again.

I didn’t learn that I was hard as nails; I learned that I was basically weak, and also that I was capable of moving through the space of self-doubt and fear in order to stay alive and awake. Ultimately, that’s what Ranger School teaches a young leader: to keep going when the going gets tough. That’s what the Army expects of its leadership, and the Ranger Tab is the physical manifestation of that capability. Many do not hold Ranger tabs and are equally capable — seeing the Tab is direct evidence of that psychological resilience.

Still, my Ranger School experience was easier than that of the first two women to earn the Tab. I guarantee it. It was probably the easiest class of all time. This is why I have so much respect for the latest Rangers, especially those with the fortitude to go where nobody else like them had gone before.

When I went to Ranger School, it was at the height of the “boots on ground” phase of the War on Terror, right before the Surge in Iraq. There was a real emphasis on getting junior officers as much experience and knowledge as possible before sending them into combat. So much so, in fact, that during my year, the military dedicated an entire extra class to train junior leaders. In order to shepherd this extra class through, the officers in charge of Ranger School cancelled a month of vacation for the Ranger instructors. A portion of the anger the Ranger instructors normally would have directed at my class was saved for the special class of infantry lieutenants coming in after mine; the class that stole the Ranger instructors’ usual April vacation. I know this because the Ranger instructors said so. “Ranger, you don’t want to recycle,” each Ranger instructor would say when we were walking patrols, “This next class is going to have it tough.”

Of course nobody wants to recycle because recycling is difficult. It means you’re in Ranger School at least a month longer; it means starting over with a different group. In my case, it would have meant recycling into a horrible class that the Ranger instructors were looking forward to hazing, and it would have meant being in Florida in May/June instead of April/May.

Which brings me to a huge part of why my class was so easy: I attended Ranger School in the Spring. I arrived in March and graduated at the beginning of May. It was cold during the first of three phases and snowed at the beginning of the second, but after April, it was quite balmy — somewhere between 50 and 80 degrees. Much colder and I might’ve cried harder. Much warmer and I would not have made it. The female Rangers made it through June, July, and August. Pretty sure that means 90-degree or hotter temperatures regularly in Georgia and Florida. Fuck that.

Another thing: All of my class’s jumps were cancelled by weather. Airborne Rangers jump in their various phases, and this is very difficult because it’s the easiest way to get injured. The body breaks down, the drop zones are complicated, and jumps can hurt paratroopers under even ideal conditions. My class didn’t jump once. Instead, we slept on airfields and then planes while we waited for the jumps to get cancelled.

My class actually got a lot of sleep in the last phase. In Florida, it seemed like we were always in “lightening lockdown.” It felt like the last two weeks of April 2006 may have set some kind of record for thunderstorms over Eglin, the base where we were training. I remember tabulating 15 extra hours of sleep that we by rights should not have had. Spread over two weeks that may not sound like a lot, but the difference between three-to-five hours of sleep and five-to-seven hours of sleep is tremendous, and I was still nearly catatonic.

The attention on the female Rangers must have been a great distraction as well: sky-high expectations from superiors, from the media, from their peers. The fact that the women didn’t just pass, that they excelled, pulling high marks from their peers, speaks volumes about their performance. You can fool Ranger instructors sometimes, but you can’t fool the people helping you pass patrols.

But this isn’t that unusual. At my graduation, then-Lt. Gen. David Petraeus spoke at my graduation because the first Iraqi was graduating in school history. Princes, sons of generals, sons of VIPs from foreign countries, NATO generals, or kings — any place where the military is held in high esteem — often attend Ranger School. It’s not abnormal; this is routine. Many of them fail.

People are going to talk about how this latest class was rigged, or that the standards were made easier, and the truth is: every Ranger School class encounters different variables, every Ranger School class has different standards. The challenge for different people varies differently from season to season. You can have good students around you, or bad students. You can get lucky, or be unlucky. The Ranger instructor evaluating you on the day of your test might be sympathetic, or a psychopath. The one constant is that Ranger School wears your emotional and physical reserves down to a bare minimum, boils a student down their essence, and then tests them. The two women have proved that sex doesn’t matter at Ranger School — only survival.