It’s Not The Uniform That Matters

The U.S. Navy recently introduced a number of new policies that significantly change women’s uniforms to make them more closely... 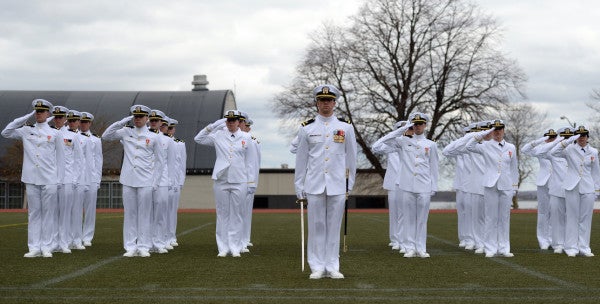 The U.S. Navy recently introduced a number of new policies that significantly change women’s uniforms to make them more closely resemble men’s uniforms. The changes have not been without controversy and I’ve read with keen interest the ever-growing barrage of commentaries and complaints. Welcomed or not, the human reaction to change is almost always angst, and the Navy’s recent uniform changes do not deviate from the norm.Many decry the loss of a traditional female uniform design that was largely unchanged since women first entered naval service, saying that such change to enforce more gender neutrality flies in the face of diversity, which appreciates differences rather than tries to diminish them. On top of this is the argument that it’s yet another superfluous change and waste of money. To my sisters in arms, I ask that we focus on what is really important in our lives and careers, because this just doesn’t matter.

As members of the military, our uniforms are only one of many ways in which we honor our heritage and those who have walked before us. I absolutely respect and appreciate the commitment, sacrifices, and accomplishments of the women who paved the way for my career, but I don’t need to look like them to honor them. I need to uphold the highest standards of performance and professionalism; the uniform in which I do that is irrelevant.

We take pride in donning a uniform or any item that identifies us as a member of an elite cadre because we are proud to be a part of that group. Space suits do not have much going for them in terms of form or fashion, but what kid doesn’t want to try one on if given the opportunity, if nothing else, to feel for a moment what it might be like to be one of the people who dances among the stars. Our children love to put on parts of uniforms, although they may know little about their history and tradition. What they do know is that someone they love and respect wears that uniform every day, and when they wear our cover, they feel just a little more like the future self they may become. Old cover, new cover, it just doesn’t matter.

Diversity is more than clothing deep. My value as a member of the team has no correlation to what I’m wearing. You earn your reputation through your day-to-day conduct and performance. Wearing a different uniform will not make people appreciate your contribution more, nor will it diminish the value of your work. Initial impressions are just that, initial. Show me your work and I’ll show you your reputation. I sincerely hope that my fellow female service members are proud to be women in uniform and in the service of our country. Just like they are proud of their other, but not necessarily visible, diversifying characteristics such as ethnicity, religion, culture, and life experience. The adornment of that individuality just doesn’t matter.

It remains to be seen how much of an impact these uniform changes will have on unit cohesion and desegregating the female minority within the fleetas Secretary of the Navy Ray Mabus has argued. My guess is that most sailors will barely notice the change after the initial commotion. We already spend most of our time in the same uniform as our male peers, so extending that uniformity to dress events and formations is not likely to elicit much more than a momentary recognition that something is different. Or maybe we won’t, because we’ll all look the same, and once the novelty wears off, we just won’t think about it anymore.

Female officers are unfortunately the one segment of the Navy population that is personally bearing the financial cost of these changes. Sure, it sucks. But so does paying a premium for all our uniform items of mediocre quality. I do not relish the thought of shelling out $97 for a new combination cover when I just bought one last year for $145 when I was promoted. But when I think of things I want to see change during my career and lifetime, this doesn’t even register.

I hope that one day women will join the Navy knowing that a successful career is compatible with a family, and see women in leadership positions as the norm, not the exception. I yearn for the day when we don’t have sexual assault prevention training because sexual assault is a thing of the past. I look forward to people asking about my experience as a military member, and not how I handle it as a military mom. So I’ll grumble a bit when ordering my new cover, and when it arrives, I’ll put it away with the plethora of other uniform items and get back to work. I’ll probably give my almost brand-new cover to my daughter, who asked if she could have it when I didn’t need it any more. And pretty soon she’ll probably ask for my new combination cover too, because what the cover looks like just doesn’t matter.