Imagine a young soldier. Her* superior often comes to stand next to where she sits while he looks over her... 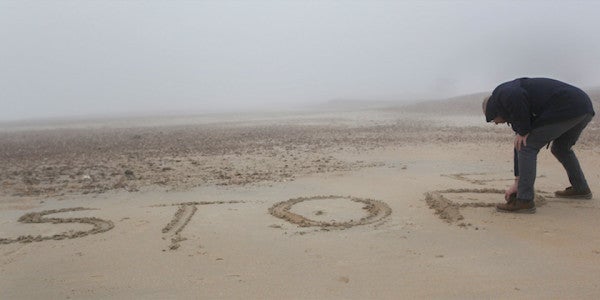 Imagine a young soldier. Her* superior often comes to stand next to where she sits while he looks over her work, putting his hand on the back of her chair. He never touches her, but she senses an emotional intensity that does not fit the situation and feels uneasy with him standing so close.

The textbook solution is for her to tell him that his behavior is making her uncomfortable. But what if he responds that he is just doing his job of inspecting what he expects, that they are both soldiers and should be comfortable in such close proximity, that unit cohesion is not possible if she is so suspicious? This will likely to be his exact response, whether he has ill intentions or is just being unprofessional. It is difficult to say that someone has crossed a line when the line is not plainly defined. The young soldier may doubt herself and her own judgment and believe that she has misinterpreted his behavior…and now he has accustomed her that behavior and can continue to push her boundaries further.

We usually think of “setting boundaries” and “drawing a line” as reactive: someone does something we do not like, and we tell them to stop. But not only can it be difficult to confront a fellow servicemember, particularly when a difference in rank or a supervisory relationship exists, but, because many behaviors exist in a gray area on the spectrum and are not unequivocally inappropriate, this approach can actually make a target more vulnerable. Predators know how to groom their environment to normalize their actions and create a narrative that makes everyone else wrong.

Instead of waiting until someone probes our boundaries and then confronting them, it is best to proactively define those boundaries in a way that makes intentions clear and creates an explicit gap between acceptable and unacceptable behavior. There is an analogy in how we set up a vehicle checkpoint. We do not mentally draw an invisible line on the road and then respond with force to whoever crosses it. We use cones, signs, barriers, and other indicators that force anyone approaching to reveal their intent—and, of course, we also engineer checkpoints to protect ourselves from attack.

How to do this depends on the situation; it often involves the physical environment. In the example above, if the soldier is able to create a physical barrier—by, say, having her chair against the wall—it will be obvious if her superior is actively trying to violate her personal space instead of doing so unthinkingly, which takes away his excuse if he protests that he is just doing his job. A friend of mine who was unable to get her work done because male officers kept stopping by to chat for no particular reason simply rearranged her office so that it was no longer possible to make eye contact with her from the passageway. This forced anyone wanting to talk to her to make it clear that they were deliberately choosing to do so, which kept away those who had no real business in her office. Creating a boundary that must intentionally be crossed also gives the target ammunition in the event that behavior must be reported: it is ambiguous to say “he sat too close to me,” but it is unambiguous to say “he deliberately moved my backpack so that he could sit next to me.”

The most powerful form of protection is the simple one we all learned in boot camp: the buddy system. This not only provides an extra set of eyes, which will discourage anyone with untoward intentions but provides another barrier that forces someone to make their intentions clear: anyone trying to separate you from your buddy has a reason for doing so. Another observer also gives you the option of a low-calorie intervention. Having another service member contact the problem individual and point out that their behavior could give the appearance of impropriety allows someone who has no ill intent to correct himself and start acting professionally, and lets a perpetrator who is deliberately behaving inappropriately know that his actions have been noted. In either case, the behavior is likely to stop, without a direct confrontation.

Of course, there is a time when more assertive action is called for, and having made our zones clear makes this action easier to take. In our checkpoint analogy, there is a point at which we explicitly warn a person approaching too close—and a time when we act decisively against a threat. Having proactively drawn lines helps us know when to firmly confront an individual, or to report to our chain of command, sexual harassment representatives, or other authorities. Because we have forced the problem individual to make his intentions clear, we can feel confident in our own response.

It is of course incumbent on the commander and other leaders to set expectations and foster a climate of professional behavior in their unit. But by preemptively creating clear boundaries before improper behavior takes place, service members can identify and forestall unwanted sexual advances and other inappropriate behavior on an individual level.

(*My example target is female, but the targets of unwanted sexual advances and harassment are often male or transgender. Enduring stigma leads to underreporting of incidents involving the latter targets. I feel confident in asserting that the perpetrators of sexual harassment are overwhelmingly male.)

Zachary Martin is a former Marine infantry and expeditionary ground reconnaissance officer who made four deployments to Afghanistan and Iraq. He teaches sexual harassment/assault prevention and suicide prevention to members of the military and is working on a novel about the ongoing war.